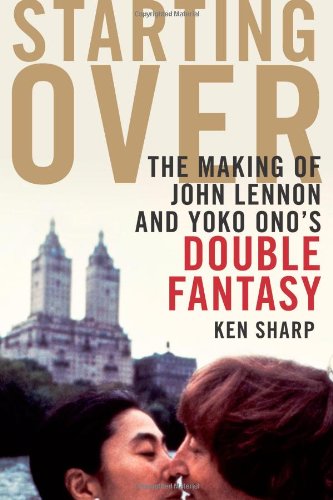 “There’s only two artists that I’ve ever worked with for more than a one-night stand.   That’s Paul McCartney and Yoko Ono, and I think that’s a pretty damned good choice!”   John Lennon, 1980

Before this, only one book took you inside the recording studio with The Beatles, and that was Here, There and Everywhere: My Life Recording the Music of the Beatles by Geoff Emerick.   Emerick’s book explained the fascinating work performed by sound engineers such as that which led (in some small measure) to the success of the four moptops.   One of the disclosures in HT&E was that the recording sound process at Abbey Road always began with ensuring that Ringo’s drums would sound right and/or unique on each track. (Paul McCartney, who lived around the corner, was the individual who usually tuned the drums used by Ringo and Badfinger’s drummer.)

Now, with Ken Sharp’s book,  we go into the sound studios of New York City circa the winter of 1980, with former Beatle John Lennon, his wife Yoko Ono and a new band of hotshot musicians.   Lennon’s final album, Double Fantasy, would be recorded just weeks before his death (the single “Starting Over” was the track the public heard first), and would be well-crafted enough to preserve his legacy as a musical genius.

This was the happy-husband period for John Lennon who was pleased about everything, even the past:  “He never spoke about the Beatles in a negative way.   Ever.   He only said positive, affectionate things about them…  He was able to look back at their work and realize how great a band they were.”   (Andy Newmark, drummer)

And this was the John Lennon who filled his new album with what some viewed as recordings invading Paul McCartney’s well-marked territory – (silly or non-silly) love songs and songs of domestic harmony and bliss.   John was not at all apologetic about his new-found contentment:  “To work with your best friend is a joy and I don’t intend to stop it…  My best friend is my wife.   Who could ask for anything more?”

“…records do tend to either gain or lose aura as decades pass.   I would say Double Fantasy is one of the many excellent records that has gained a certain aura, glow, stature and presence.”   Robert Christgau

The participants interviewed for this book all display a sense of both bittersweet happiness and sorrow at having worked with John Lennon before his untimely death.   “I hadn’t listened to Double Fantasy in a long time.   I recently put it on and as soon as I started playing it, the tears welled up.   It was a real emotional experience for me.   There was a lot of joy doing that record…  When I hear the songs, I see John working on the tracks.   It’s the closing musical statement of his life and it’s filled with great songs.”   (Hugh McCracken, guitarist)

Well said, and this account is a well-written, detailed and loving tribute to someone who simply left us too soon.   Read this book and you will come to know and admire John Lennon’s honesty and his integrity.   By reading this book you’ll also come to discover the background stories of such great songs as “Beautiful Boy (Darling Boy),” “(Just Like) Starting Over” and “Watching the Wheels”.

Think of Starting Over, the book, as the great lost album notes to the original vinyl release.   It will serve you well.