One of the joys of reviewing books is when one comes across a new book or writer that was not previously on the radar screen. That is what happened to me with Hannah Gersen’s novel Home Field. Plain and simple, Gersen delivers the goods.

Gersen tells a touching story of loss and redemption that engages and avoids sentimentality. Her ability to craft meaningful and natural dialogue among characters, which is difficult for many writers, is impressive.

In Home Field, Dean Renner is a revered small town football coach in rural Maryland. However, his personal life is not as orderly or successful as his disciplined routine as that of a head coach (amid the excitement of Friday night lights).

Dean’s wife Nicole, whose first husband died young, suffers from depression and ultimately commits suicide in the most unsettling of ways. His stepdaughter, Stephanie, wrestles with the loss of a father she never knew followed by her mother’s untimely death. Dean battles his own troubles as years of emotional isolation during his marriage took its toll. Was Nicole’s unhappiness due to Dean’s obsession with coaching, or did he absorb himself in coaching to fill the void that her mental illness created in his life? Or, is it just the way of things that the unscripted complexities of life do not lend themselves to executing a plan in the way that X’s and O’s on a chalkboard equal success on the field?

On top of it, Dean must play single father to his two boys, one of whom – Robbie, is a mystery to him. Robbie’s attraction to the theater and his extreme sensitivity are foreign to Dean’s practical, tactical approach to life. It is Robbie who holds the mirror up to the characters’ souls; it’s his actions that bring the events in the story to a head, and bring the hearts of the community together. 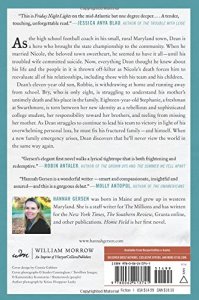 Coach Renner appears to achieve some peace of mind as the story comes to a close. But, one question remains. He could not save his wife from herself. So while he works miracles with other people’s kids, can he save his own?

Dave Moyer is a public school superintendent in Illinois, and is the author of Life and Life Only: A Novel.