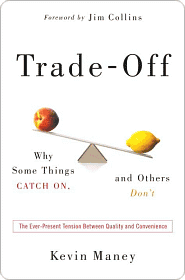 The sub-title of Trade-Off is “Why Some Things Catch On, and Others Don’t.”   It is a title that describes the book itself, which both worked and didn’t work for this reader.   In it Kevin Maney describes “the ever-present tension between quality and convenience” in the business world.   A better way of understanding this is his statement that companies can either be needed or loved…  Something he explains by looking at numerous companies that made the mistake of trying to be both needed and loved.

One clear example is Starbucks.   The company went from being a dependable brewer of bold coffee in select locations to – seemingly overnight – a company whose “shops” were everywhere; a company that tried to sell its customers everything from books to records to dishware.   Its standard mission of selling bold coffee seemed to be lost in its great expansion plans.   By getting bigger, Starbucks became smaller in the eyes of its customer base.   And its exclusivity – its value – was lost.

Think of Nordstrom.   If Nordstrom suddenly expanded to the point where you could find one of its stores next to every 7-11 or Wal-Mart, what would you think about it?   At the least, one would think that it had become ordinary and that something must be “wrong” with the merchant.   This illustrates another accurate point made by Maney, “Great companies figure out what they can do better than anyone else in the world, and then relentlessly focus on that.”

Yes, but the all-too-great temptation is to try to do other things, new things, and this is where companies from Motorola (RAZR, anyone?), to Starbucks, to Coach and Tiffany have stumbled.   Right this minute I see the same thing happening with Target, which has gone from being a solid purveyor of quality mid-level customer goods to one which is a sad knock-off of Wal-Mart.   Someone at Target’s corporate headquarters has decided to not let Target be Target, which is unfortunate.

So Maney does a fine job when it comes to making the point, repeatedly, that a business can offer either quality or convenience – it cannot do both.   Many will try to cross the line from quality to convenience – Starbucks again being the best example – and pay a high price for it.   And does anyone remember Krispy Kreme?

About four-fifths of the way through Trade-Off, however, Maney begins drinking his own Kool-Aid.   He began the book by being needed and he succumbs to trying to be loved, giving the reader his prognostications – his guesses – as to how certain businesses can be “fixed.”   His writings become rather silly at this point.   He jumps into the health care debate and decides that “doc in the boxes” are the future, notwithstanding that this trend came and went in the 80s and 90s, and the facts – as he admits – are that they tended to be cash-only enterprises (which does not help those without health insurance) staffed by nurse practitioners and R.N.s rather than licensed physicians.

Maney also goes on to describe the current circulation problems with newspapers.   As a former reporter, his solution is for newspapers to target boomers in their print version, and young people with jazzy internet versions.   This is just plain ridiculous.   Young people avoid certain papers because they’re seen as irrelevant to their own lives.   In my own community of  Sacramento, for example, the alternative Sacramento News & Review sells more advertisements every week, while our mainstream paper claims it cannot find sufficient advertisers due to the recession.   Right…

There’s simply no way a mainstream newspaper is going to design a website that attracts young readers who are avoiding that paper – that outdated (and un-cool) brand – in droves.   A better solution would be to de-construct what it is that makes the alternative paper attractive [hint: it has an attitude] and attempt to imitate it, although it is probably too late in the day for many of today’s – or rather yesterday’s – newspapers.   It may simply be that their time has come and gone.

Near the end of Trade-Off  Maney writes, “I hope the trade-off was worth it.”   In the case of this $23.00 list book, the answer is no.   This likely would have made a great airline magazine article, good for passing a half-hour or 45 minutes in the air.   As a business-consumer psychology survey, it winds up being simply ok.   Maney lost more than he gained by going past the book’s logical ending point and filling it with stuffing.

A review of Trade-Off: Why Some Things Catch On, and Others Don’t by Kevin Maney. 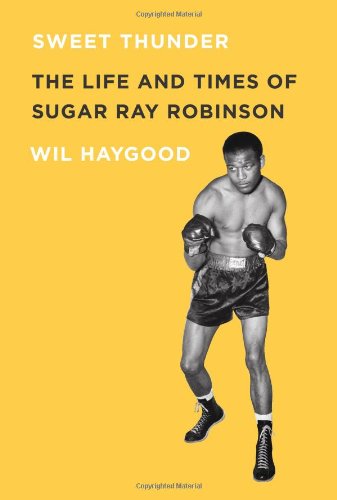 “It was a savage sport, but it held a kind of sacredness to him – a mystery.”

Few biographies of great athletes manage to conquer the legend; to place the athlete in context as a walking, talking, human being.   It may be because they tend to be either fawning – relying on “good stories” without regard to their accuracy – or they’re overly bloodless and academic.   (None of the biographies of Michael Jordan, for example, have seemed to capture the man behind the uniform.)   There have been some exceptions…   Namath: A Biography by Mark Kriegal was fascinating and brutally honest/factual, as was Sandy Koufax: A Lefty’s Legacy by Jane Leavy, and Joe DiMaggio: The Hero’s Life by Ben Cramer.   But these remain the exceptions that prove the rule.

Now add to the exceptions list Wil Haygood’s biography, Sweet Thunder: The Life and Times of Sugar Ray Robinson.   Haygood – who earlier wrote a biography of Sammy Davis, Jr. – manages to capture the personality of the man in addition to the accomplishments of the athlete.   Robinson was, no doubt, one of the handful of best boxers who has ever lived, yet he was notoriously envious of the skills of other public figures and entertainers – most notably musicians.   (“He wanted desperately to know about life on the road for musicians.”)   Haygood uses this angle to produce some excellent comparisons between Robinson and jazz players such as trumpeter Miles Davis.   But the analogy only goes so far, as musicians’ errors are masked by other musicians.   The boxer enters the ring alone and stands or falls on his own.

Haygood fully acknowledges the fact that Robinson – a kind man on his own – could be vicious in the boxing ring.   After killing Jimmy Doyle of Los Angeles in a fight, Robinson was asked at the inquest if he knew or suspected that Doyle was in trouble.   His response was that, as a professional fighter, it was his job to get men “into trouble.”

This period piece is also a glorious overview of post-World War II Harlem, a time when jazz was at its peak and the issue of civil rights was about to break.   The general acceptance of black public figures like Robinson (the third African-American/Negro to have his face on the cover of Time magazine) made them pioneers in the then-burgeoning movement.   But the author does not take things too far in this direction as this is not a sociology or history textbook.   Nor does he bore us with literal blow-by-blow accounts of every single amateur and professional fight that Sugar Ray Robinson fought.   No, instead he tells us just enough to understand and recognize the greatness of this late athlete’s (1921-1989) life within and outside the world of sports.

This, then, is the well told story of a man blessed with great skills:   “I had it tonight; yes, sir, I had it tonight when I needed it – thank God.”   This is the true tale of the man who did so much to advance The Sweet Science, which is perhaps why he was the first of three highly gifted boxers (Sugar Ray Robinson, Sugar Ray Leonard, Sugar Shane Mosley) to be known as Sugar.   A New York Times reporter once wrote of Robinson, “He’s too incredible, too colossal to be true.”

Highly recommended.   Haygood captures both the man and the legend.   Excellent!

“The French had called him Le Sucre Merveilleux – the marvelous Sugar.”

“A well-composed book is a magic carpet on which we are wafted to a world that we cannot enter in any other way.”   – Caroline Gordon

The Last Will of Moira Leahy: A Novel by Therese Walsh (Broadway Books, 304 pages)

The Last Will of Moira Leahy is a book that takes its readers to a different world.   It is a novel of charm, mystery, of things that cannot easily be explained and of faith.   Faith in fate (often hard to come by, often rationed) and in the journey one is supposed to take in this life…   Faith that the right lesson will be learned at the end.

This is a story of twins, something much in vogue at the current time.   Therese Walsh’s story shares some of the mysticism of Audrey Niffenegger’s Her Fearful Symmetry.   It also paints twins as exotic creatures with shared language, thoughts and animal-like instincts.   Of course, the twins are not exactly alike.

The narrator Maeve Leahy, is the more cautious of the two – more cautious in love and in life.   She is a musician, a saxophone player, but she’s not the musical prodigy that her piano-playing twin Moira is.   It seems that Moira will lead the bigger life until a tragedy strikes.   Then Moira is frozen in place while Maeve is left to fend for – and find – herself.

After a period of depression, Maeve attends an auction where she spots a keris – an ancient and believed to be magical type of sword – similar to one she owned as a child.   Maeve finds that she has a need to discover more about the centuries old keris and this takes her on a journey to Rome, Italy.   It is on this journey that she learns more about herself, her twin, and life.   Life without fixed boundaries.   “Not everything in life can be measured or accounted for by the five known senses.”

First-time author Walsh has a smooth style with enough uniqueness that the reader desires to keep reading.   She stays ahead of the reader, too, as nothing predictable occurs.   I had just one small issue and that was the disconcerting movements  between present time and prior events.   It is not actually harmful in this case, but the baseline story is strong enough that it could well have been told chronologically.

This is one of those books where you delay getting to the last page, knowing the next book from this gifted author may not arrive for another year or two.   Nevertheless, this is a trip that is – without a doubt – well worth taking.