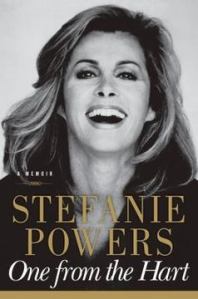 Spunky, vivacious and charming are words that easily describe Stephanie Powers, the actress best known for her role in the television series Hart to Hart.   Yes, her character on the series also matches up with these adjectives.   Don’t be fooled by appearances or roles, for when it comes to intellect and curiosity, Ms. Powers leads the Hollywood pack.   Her memoir, One from the Hart, is filled with fully developed recollections of a life lived all over the globe.

Although Powers’ formal education concluded with her graduation from Hollywood High School, readers will be treated to the best in grammar and word selection.   Powers set out to make up for a lack of college education by committing to reading through the literature list for students at the University of California, Los Angeles (UCLA).   With that goal accomplished, she has maintained a lifelong course in learning.   Her curiosity and willingness to expand as a person has resulted in a remarkable memoir that is well-developed and engagingly narrated.   This reviewer felt as though she had been included in the circle of friends that Powers has grown over the last several decades.

Yes, Powers is talented musically and as an actress.   Yes, she is remarkably beautiful.   Underneath this Hollywood veneer beats a heart that truly loves people and animals.   Her actions speak for themselves for she is the driving force behind the William Holden Wildlife Foundation in Kenya.   Given her enthusiasm for education, it is no surprise that Powers founded the organization to honor the efforts of her long-time love William Holden.

This engaging book includes photographs from Powers’ private collection that serve to document the remarkable events in her life.

A review copy was received from the publisher.   Note:  Hollywood High School, the home of The Pharaohs, also produced two notable actors who would come to be known to the world as James Dean and Marilyn Monroe.