Everybody Is A Star 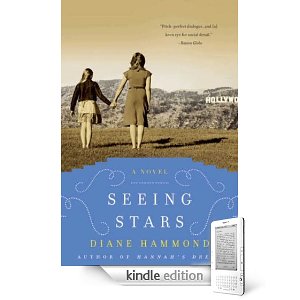 “The thing about Hollywood is, it’s no different from heroin or gambling or crack cocaine, except in Hollywood the high is adrenaline.   …And, at any given moment there are ten thousand stunned and hopeful actors driving around the LA freeways, and every one of them is believing that the big break is coming just as surely as sunrise.”

Anne Lamott’s recently released novel Imperfect Birds is a nearly perfectly written story of a loving family in crisis.   In Birds, the love emotes with tension as three family members try to minimize the mistakes they inevitably make in their relationship.   Birds is both tiring – in the sense that it requires the reader’s full attention – and uplifting.

Now Diane Hammond arrives with another lovingly told family novel, Seeing Stars.   Stars is the tale of several families of acting children and their stage mothers who are seeking the fame and fortune that only Hollywood can provide.   Is the pot of gold they’re seeking real or just an illusion?   In part, it’s both.

This is primarily the story of one Ruth Rabinowitz who is almost completely sure that her daughter Bethany is destined to be one of the stars in the Hollywood night.   But Hollywood pushes back by telling Ruth that her daughter is, at best, a character actor.   Then there’s Ruth’s husband, Hugh, left behind in Seattle with his 20-year-old dental practice.

Hugh supports his wife and daughter but honestly feels they are chasing a dream that will never come true – and the cost of maintaining an extra household in L.A. (not to mention the cost of acting lessons) is eating up all of his earnings.   Does Hugh make Ruth and Bethany return home or let them experience failure?   Will his wife and daughter prove him to be wrong?

The Rabinowitz’s story is the main one but there are several associated ones in Stars.   There’s Bethany’s sometime friend Allison Addison.   Allison is beautiful and knows it.   She also knows that her time to secure a big-time leading role is quickly running out.   Her aggressiveness hides her loneliness.

Allison is quasi-adopted by the shrewd and tough talent agent Mimi Rogers.   Mimi is tougher (“…like an old cat in the night”) than 90% of those in the business but even she must eventually meet her match.

There’s Quinn Reilly, another find of Mimi’s, who is a young James Dean.   Like Dean, he simmers with obvious talent but isn’t much with the social skills.   Will directors use him or figure it’s not worth the cost and aggravation?

Finally there’s Laurel Buehl who is talented enough to make commercials but may be lacking the personality to take the next step.   Her mother Angie has had to battle and survive cancer to be at her side.

Hammond puts all this together with charm and style.   This is an easy – and thus surprisingly fast – read because she so well cushions tension with humor.   In a sense, Hammond’s writing is like Anne Lamott or Anna Quindlen with blinders on.   That’s OK, sometimes we need a bit of a break from the harsh light of reality.

It all ends stunningly and smoothly – and must be experienced by the reader rather than explained here or elsewhere.   At the end of Seeing Stars, all of our protagonists both win and lose.   They all – each and every one of them – learn to take what they need out of life and to leave the rest.

A review copy was provided by Harper Paperbacks. 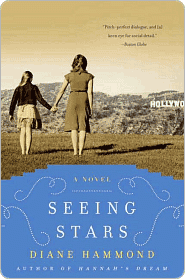 The thing about Hollywood is it makes you doubt yourself – your identity, your judgment, you motivation, your parenting…

Ruth Rabinowitz had a waking nightmare that she had hit a transvestite crossing Highland at Hollywood Boulevard.   In her mind the transvestite would be lying in the crosswalk surrounded by Shreks and Dorothys and Princess Fionas; Batman would call 911 while Japanese tourists took pictures of the fallen one with their cell phones.   The transvestite would be fine, of course – it was a waking nightmare – and when s/he was set upright on his/her extremely tall platform shoes, s/he would look down on Ruth from six feet up and say kindly, Go ahead, honey – you cry if you want to.   Ruth would break down right there, and the transvestite would take her gently in his/her arms – and his/her skin would be wonderfully silky and toned from hours at the gym – and smooth her hair from her face while she wept.

That’s how much pressure she was under.

Driving into Hollywood was always harrowing, and though she and her thirteen-year-old daughter, Bethany, had been in Los Angeles for only three weeks, she had already learned that the smoothness of the trip to a casting studio was inversely proportionate to the importance of the audition.   Right now it was three o’clock, Bethany’s callback time had been two forty-five, and they were stuck in choking traffic on Highland near Santa Monica.

Admittedly, some of their tardiness – all right, most of it – was Ruth’s fault.   She had a tendency, even under routine circumstances, to dither.   She’d changed clothes twice before they’d left, even though no one would care or even notice what she was wearing.   She’d checked and rechecked an e-mail in which Mimi Roberts, Bethany’s manager, had forwarded the callback’s time and location.   She’d printed out, misplaced, reprinted, and then found the original copy of the MapQuest directions she’d pulled up – even though they’d driven to the same casting studio just yesterday.   Now she heard the same maddening refrain looping endlessly inside her head:  You should have left sooner, you should have left sooner, you should have left sooner.   Her blood pressure was so high she could feel her pulse in her feet.   “I just can’t believe there’s this much traffic,” she said.

“Mom,” Bethany said with newfound world-weariness.   “This is LA.”

“Well, you can certainly see why it’s the birthplace of road rage.”   They moved up a couple of car lengths and then stopped, still at least eight cars short of the intersection.   Beside them a young man in a BMW cursed energetically into his Bluetooth…

This is an excerpt from the opening of Seeing Stars: A Novel by Diane Coplin Hammond.   This entertaining and charming book will be reviewed in the near future on this site.   Seeing Stars was released by Harper on March 23, 2010.   This trade paperback sells for $13.99, and is available as a Kindle Edition download for $9.99.