A Blurb Too Far 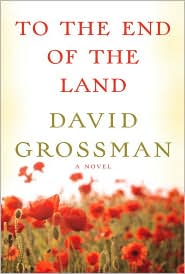 OK, so we all know that book blurbs (those quotes of high praise you find on the front and back covers of books) can be more than a bit full of hyperbole.   But most of them attempt to remain within the bounds of reality.   The following one may be an exception and it’s one that’s getting a lot of attention online.   (So we’ll add to that attention.)

This blurb was written by one Nicole Krauss about To the End of the Land, a forthcoming novel by David Grossman, translated by Jessica Cohen.   Are you ready?   Fasten your seatbelts.   Here’s the fantastical blurb:

Very rarely, a few times in a lifetime, you open a book and when you close it nothing can ever be the same.   Walls have been pulled down, barriers broken, a dimension of feeling, of existence itself, has opened in you that was not there before.   To the End of the Land is a book of this magnitude.   David Grossman may be the most gifted writer I’ve ever read; gifted not just because of his imagination, his energy, his originality, but because he has access to the unutterable, because he can look inside a person and discover the unique sense of her humanity.   For twenty-six years he has been writing novels about what it means to defend this essence, this unique light, against a world designed to extinguish it.   To the End of the Land is his most powerful, shattering, and unflinching story of this defense.   To read it is to have yourself taken apart, undone, touched at the place of your own essence; it is to be turned back, as if after a long absence, into a human being.

Wow!   And she wrote that, I’m sure, while typing with her gloves on and without taking a breath.   No, I don’t know exactly what I mean, but did she?   Whew…   Unflinching, unique light, turned back into a human being, all of that and more.   (So much more.)

So let me ask you – Would you  want to read a book that takes you apart and touches you at the place of your essence?   Me neither but, who knows, it could be a good read anyway.   LOL.

To the End of the Land will be released to the physical universe by Knopf in hardbound form and in a cozy digital Kindle Edition on September 21, 2010.   The novel will run 592 pages, so you’ve been warned…  But if you love it (especially if it turns you back into a human being), remember that you first heard about it here!