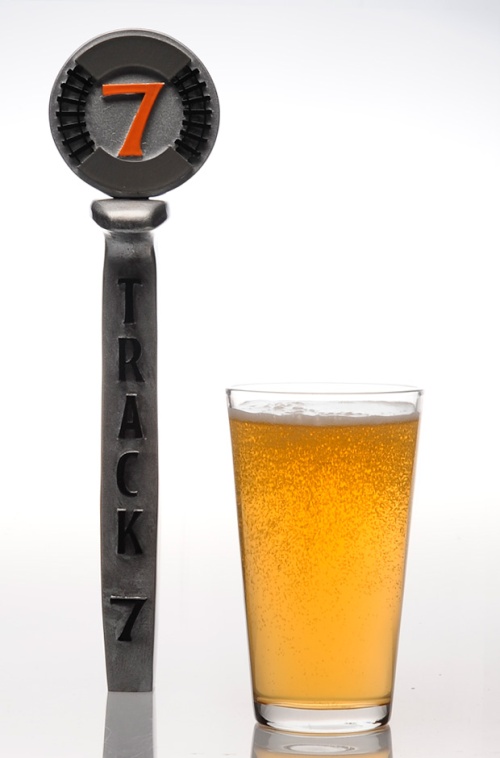 We live in an era where breweries are only as good as their India Pale Ales (IPAs) and Imperial Stouts.  It’s hard not to get caught up in the craze surrounding these two styles.  I, too, feel like I have to force myself to try beers in varying styles, making deals with myself like, “You can have an IPA after you have a beer of a different style.”  The funny thing is that even though it feels like a chore just to order a non-IPA, I usually drink it with no major issues.  Recently, I got my hands on Track 7’s Bee Line Blonde Ale and I didn’t just think it was a fine beer, but an excellent beer.

There were no surprises in the appearance as it could have been mistaken for honey in the glass.  Seeing a golden beer with a pillowy white head is always a welcomed sight. The head dissipated rather quickly, but left rings of lacing down the glass.  For a blonde ale brewed with honey, it’s appearance was spot on.  5/5

On the nose it is very reminiscent of some classic German pilsners and some adjunct lagers.  You get a head of grain and wheat, but then on the back end you notice some sweet honey that rounds the profile out.  4/5

As expected, this is definitely a thinner beer, but it doesn’t diminish the beer at all.  The honey definitely gives the body a little weight, but it was still light and crisp with decent carbonation making it seem spritzy at times, dancing around the mouth.  This made me think of bees buzzing around!  Maybe I wouldn’t have thought that way if the beer were named something else, but it definitely impacted my perception.  4/5

The honey is definitely more noticeable on the palate than the nose, which I’ve found to be the case with many beers brewed with honey.  There is a subtle hop bite on the back end — very reminiscent of German pilsners — that contrasts the sweet honey in the best way possible.  There is a grainy aspect to the taste as well and reminds me of some adjunct lagers, but thankfully the honey and hop bill combat it and leave you with a lighter low ABV beer with plenty of flavor and character.  4.25/5

Honestly, this is my favorite blond ale to date.  There is a depth to this Sacramento brewed beer that is often missing in the style.  It’s the perfect summer beer as it is light and refreshing, while delivering loads of flavor.  It won’t wear you down and sit heavy on you like some other varieties do.  Overall, I’d have to give this beer a final ranking of 4.33/5.  Highly recommended.

I’m glad I got to drink a beer out of my wheelhouse, because this beer makes me want to explore the options outside of stouts and IPAs that rule the beer world and see what else more seemingly simple types can offer.  If you are able to pick this beer up, I would.  This is certainly a beer that people in the craft game can appreciate, but it could also be an excellent gateway beer for your macro-drinking friends.  If they can’t appreciate it, who cares?  That just leaves more good beer for you.

Ryan Moyer is a graduate of Indiana University.

Picasso’s Last Words (Drink to Me)

A beer review: A look at two India Pale Ales.

India Pale Ales (IPAs) originated when English explorers had to transport hearty hops to the West Indies that could survive the journey, thus providing a flavor distinct from traditional pale ales. The West Coast of the U.S.A. has long been the forerunner in the craft beer craze, and Rubicon Brewing Company of Sacramento, CA, has brewed a fine IPA.

This reviewer’s journey through craft beers has consistently led him to settle on IPAs as far and away the favorite. Usually, the hoppier the better. However, Rubicon’s IPA is neither excessively hoppy nor overly fruity. At 6.5% alcohol-by-volume (ABV), it is instead instantly refreshing. That is the initial impression on the taste buds.

I am told that Rubicon will now be releasing this beer in six-packs. I first sampled it in the traditional 22-ounce bottle. As a Chicago customer, I am not sure if it will be available in the region, but if one can get this on draught at a bar or restaurant, it is highly recommended. I am speculating, based on the regional pricing, that the beer would go for about $9.99 to $10.99 for a six-pack if available.

The ever reliable Beer Advocate website rates Rubicon IPA as an 83 on a 100 point scale.

By virtue of comparison, Boston Beer Company has recently released Samuel Adams Rebel IPA, it’s version of a West Coast IPA. Rebel is also 6.5% ABV. Upon release, my local store sold it for $13.99 per 12-pack – a steal and well worth the price. Now that consumers have had a chance to taste it, the price has risen and a six-pack of bottles goes for $8.99 (a fairly typical price for decent beer in this area). Beer Advocate ranks this beer as an 82.

Given a choice between the two, Rubicon is slightly better, though Rebel is no slouch. For a slightly higher price, Rubicon’s distinctive IPA is probably worth it, assuming you can find it. If not, Sam Adams’ latest effort – which is well recommended – will easily do the trick.

Dave Moyer is an education administrator and the author of Life and Life Only: A Novel.

Note: The ugly, garish label on the Sam Adams Rebel IPA should cost it at least a few ratings points on Beer Advocate and elsewhere. (Joseph)

A beverage review! We take a look at how Rubicon India Pale Ale (IPA), from Sacramento’s Rubicon Brewery, stacks up against another brewer’s new IPA.