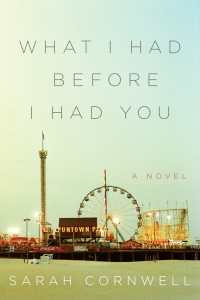 This is a novel that seemed to promise a good story. Unfortunately, the story was lost in the execution. The book involves two plot lines, the first about a young woman – Olivia Reed – who loses her nine-year-old bipolar son at Funtown Pier on the Jersey Shore. The second plot line involves her coming into contact – years earlier, with the supposed ghosts of her twin sisters that died at birth. This latter plot line caught my attention as I hoped it would offer some of the unique enjoyment found in Her Fearful Symmetry by Audrey Niffenegger.

The two disjointed stories, regrettably, come together to no apparent purpose. One reason is that Cornwell sacrifices the two plot lines for a third – the story of Olivia’s psychic and mentally troubled mother, Myla. This means that the narrative jumps awkwardly and often incoherently between present and past times. As greatly disappointing as this is, the reader learns early on that this is no ghost story. The supposed twin ghosts are in fact living young women (how it is that Olivia believed they were the spirits of her dead sisters is never made clear).

Cornwell may have potential as an author but in this debut novel she mixes bad and good writing. Her prose is often leaden as in this example:

The dorm is a high-rise with a view of the Hudson River. In the elevator, older boys look me up and down. I think I’d better be wild tonight: I could use a thrill to get out of my head after all the illuminations of the week. I study Cortney’s warped reflection in the elevator’s chrome wall and see not the flesh-and-blood girl I know she is, but the ghost staring back at me, and this gives me a little push, a little reignition. When the elevator stops and she gets out, we are mortal again, and I feel the loss and need a drink.

And sometimes she writes well as in these two examples:

They are seeing my mother move through the house, while I am seeing the house move through my mother. There is a sense of brokenness and insufficiency and then a sense of crushing loneliness. My mother turns around to look me in the eye and smiles a grim smile. She knows I am receiving her.

I make female friends rarely, but when I do, I find myself acting slightly different: bubblier or quieter or more intellectual, or less. These small calibrations wear me out; I am exhausted after spending time with women.

What I Had Before I Had You may appeal to those who harbor intense, lifelong anger at a parent. These readers may identify in some way with the horribly dysfunctional relationship between Olivia and Myla. Yet I suspect that most will fail to connect with this strange, highly troubling tale.

About half way through the reading of this rather short novel, some readers will have figured out a logical conclusion; however, this would rest upon Myla’s being alive. No spoiler alert is needed, but Cornwell figures out a way to get to that conclusion despite the fact that Olivia’s mother is dead. It’s like watching someone pound a square peg into a round hole, and it is not satisfying.

Waitin’ On A Sunny Day

I was living in Los Angeles in the winter of 1975 when a live concert by a then-unknown East Coast band was stereo-cast late one evening by a Metromedia FM radio station.   The group, Bruce Springsteen and the E Street Band, was playing at the Roxy Theatre and for all of Southern California.   The performance began with a song called “Thunder Road,” and the band proceeded to play all of the songs that we would soon come to know as the Born to Run album.   (I saw Springsteen and the E Street Band when they hit San Francisco the following year.)

Fans of Springsteen know that despite all of their digging, not much is known about his personal life.   Peter Ames Carlin, author of the well recommended Paul McCartney: A Life, and of Catch a Wave: The Rise, Fall and Redemption of the Beach Boy’s Brian Wilson, attempts to remedy this in Bruce.   Carlin draws upon numerous interviews to flesh out a picture of a real human being behind the rock legend.

Some will be surprised to see how vulnerable Springsteen is.   He’s a man who often worries about what others think of him, one who has been unsuccessful in numerous personal relationships, one who has experienced a high level of depression and relied upon years of professional counseling, and one who has often sought a geographical solution to his problems (moving from East Coast to West Coast and back, to the South and back to the West before settling back down in New Jersey).   The mature Springsteen is now a family man, with a wife, son and daughter, who has repeatedly stuck his neck out for social causes and for political candidates – notably supporting Barack Obama in the 2008 and 2012 presidential races.

Carlin has an insider’s ear for music and provides a quite satisfying amount of information about Springsteen’s recording sessions over several decades; some of the insights may cause readers to purchase albums or revisit the ones they already own.   Carlin’s best, detailed work comes in reviewing how The Rising album – a work of healing and redemption if there ever was one – was recorded after 9/11.   His analysis is excellent except for the fact that it fails to mention the very best song on the album, “Waitin’ On A Sunny Day.”   (How did that happen?) 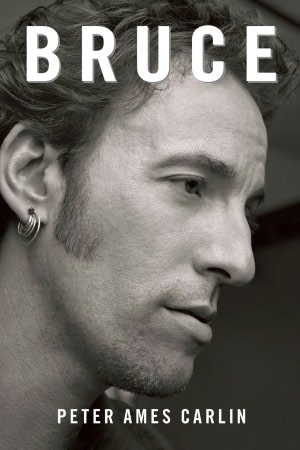 Bruce provides the insight that Springsteen has crafted his albums in the same manner in which a movie producer crafts a film.   Each album is intended to represent a story, generally about the people left behind in an otherwise prosperous society.   It’s no wonder that Springsteen’s most recent release pleaded for us to take care of our own.

This story of a performer and his unique band of brothers is more satisfying than most musician bios and it makes for a fast read despite its length.   It is, however, likely to have a short shelf life as the “definitive” biography – to quote Publishers Weekly – of The Boss.   As with bios of Paul McCartney, Brian Wilson, Bob Dylan, Joni Mitchell, Mick Jagger and other rock notables, there’s certainly more to come

“There are many things I could and should be doing right now, but I am not…  I am reading and rereading this book.   Why did you do this to me?”   Jon Stewart to Peter Ames Carlin