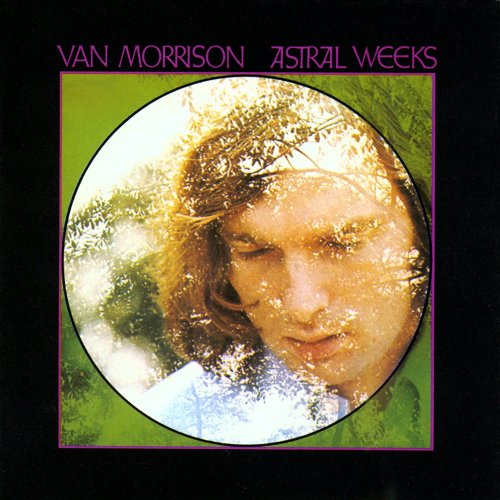 In October of 1968, the album Astral Weeks was released to the world.  The vinyl disc was produced by Van’s then manager Lewis Merenstein, who two years later would produce another pastoral masterpiece, Vintage Violence – the debut solo album from John Cale of The Velvet Underground.

The musicians on Astral Weeks were jazzmen pulled from the Modern Jazz Quartet, as well as from the Eric Dolphy and Charles Mingus bands.  The only musician from Van’s own stable was flute player John Payne.

Side One: (titled) “In The Beginning”

The album kicks off with the title track, “Astral Weeks,” seven minutes of pure bliss, opening with the lines: “If I ventured in the slipstream, between the viaducts of your dream, where immobile steel rims crack, and the ditch in the back roads stop – could you find me?  Would you kiss-a my eyes?  To lay me down, in silence easy, to be born again, to be born again…”  The combo of the upright double bass and acoustic guitars almost sounds like a chorus of cellos, majestic in every way.  I’m immediately hooked.  It’s the sound of being in love, the sound of melancholic memories, the feel of a spiritual quest.

Is there a song by any other artist that makes one feel this way?  No.

The mood and tempo drop down on “Beside You,” which opens with a bit of Spanish meets classical guitar, while the lyrics are brought to life via a roaming vocal.  This is followed by one of Van’s all time outstanding works, “Sweet Thing” – a standard among standards in the massive Van Morrison catalog.  The opening chords and the words that accompany them: “And I will stroll the merry way and jump the hedges first and I will drink the clear clean water for to quench my thirst and I shall watch the ferry-boats and they’ll get high on a bluer oceans against tomorrow’s sky and I will never grow so old again and I will walk and talk in gardens all wet with rain…” – sound so familiar to me, like an old friend. Perhaps a lover.

“Sweet Thing” has the magnificent sound of high-hat cymbals (crashing like water on the beach), the upright bass grounding it, the ringing acoustic guitars and a magical and mystical flute.  Oh, and there’s a string section on this song.  Larry Fallon did the arrangement.  Every time I hear this song, I feel like I’m high as a kite.  It’s a euphoric feeling, an energizing sound.  Just beautiful.

Seven minutes of “Cyprus Avenue” closes out side one.  I prefer the 1970-1974 live versions of this, but that’s another discussion.  When Van sings “I’m caught up one more time, up on Cyprus Avenue…” and the harpsichord responds to those words, we’re only 23 seconds in; it’s already surpassed most pop songs ever written.  As the song continues it’s lyrically simple but feels complex.  Van sounds like he’s in pain. This is THE BLUES, but in some kind of euro-classical setting rather than the south side of Chicago.  It’s a cross-cultural masterwork.

The strings give “Cyprus Avenue” a bit of a “down on the bayou” feeling, thus America is well represented.  Van is in pain, his tongue is tied every time he tries to speak; he’s overwhelmed.  He may also be stoned or drunk.  “It’s too late to stop now.”  Indeed.

Luckily for us, we have another side of the LP to explore.

“The Way Young Lovers Do” is an exercise in acrobatic genius.  The way the guitar and rhythm bounce along.  The vibraphone keeps it moving, providing a much needed “bright” and upbeat percussive feeling that the horn section supports as well.  It’s sort of an upbeat Stax/Volt thing that uplifts the vocal.  The vocal is simultaneously playful and mournful.

And then we have ten full minutes of “Madame George” – of playing dominoes in drag.  Like Dylan’s “Lily, Rosemary and the Jack of Hearts,” it’s a long story song. But it could also be “Madame Joy” – there’s some fun going on here, a nod to William Butler Yeats’ wife Georgie. (Yeats was and is a Morrison favorite.)  In 1974, Van – who rarely praises his own work, said that “Madame George” was his own favorite song.  For me, it’s far from my favorite moment on this album.

But “Ballerina” is pure bliss.  This could have been written and sung by Tim Buckley, right after he recorded “Buzzing Fly” on Happy/Sad.  Speaking of which, Van’s vocals here are as expressive, as vibrant, as reaching in feeling as anything recorded by Buckley in 1968-’69.  Damn, this is good.  More blues, more longing mixed with hope.

“Ballerina” is not the strongest track on the album, but it’s equally as essential as the best songs.  “The show must go on… Keep on pushing.”

It all comes to a close with “Slim Slow Slider.”  There’s an empty sound as it starts, lots of “space” and air in the sound.  I can hear the fingers of the bass player on the strings.  The guitar and the vocal are plaintive, the soprano sax “calling from way over yonder” – adding both a jazz and a blues element.  It’s the sound of an open field in Ireland and the sound of the ocean, maybe on the Massachusetts shoreline.  “I know you won’t be back, I know you’re dying, and I know it too…”  This is an implied sequel to “TB Sheets.”

“Slim Slow Slider” fades out much too quickly, it’s only 3 minutes long.  In the CD age, they’d have kept it going, but on vinyl it needed to fade.  My guess is, if there’s one song that is a bit longer on the original master tape, it’s this one.

“Rider” ends the album on an almost hollow, existentialist note.  Yet I’m not sure how else it could have ended as the performer, the artist, is exhausted.  He’s emotionally spent, fully burnt out.

Sometime in the early 1990s, one of the Irish daily newspapers referred to Van as a “rock star.”  The next day the paper received a scathing letter in which Van stated in no uncertain terms that he was not a rock star – and that anyone who followed his career from its beginning would know that he plays jazz, soul, R&B, and folk.  He was correct.

Although Astral Weeks is considered a classic in the rock genre, it’s more unique than that. You might say it’s a blend of jazz, soul, R&B, and folk.  The most apt description of the recording is to simply say, “It’s Van Morrison.”

Pat Thomas works with a record company based in Seattle and Los Angeles.  He’s also an author.  Like the fictional character Zelig, he seems to always be in the place where it’s happening, no matter where or when that may be.