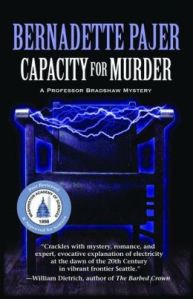 Be prepared for an enlightening mystery. The Healing Sands Sanitarium is the scene of a gruesome accidental death by electrocution. The time is the summer of 1903 when Professor Benjamin Bradshaw is called to the Pacific coast seaside southwest of Seattle to determine whether Dr. Hornsby, owner of the sanitarium, has committed more than a fatal mistake with his electrotherapeutics. Dr. Hornsby’s cherished son-in-law is the victim which makes this a touchy situation for all concerned.

Professor Bradshaw is an expert in the use of electricity which is in the early stages of adaptation to everyday life. He has successfully aided in local law enforcement investigations regarding several criminally-related electrical matters. The instrument that delivered the fatal jolt is a chair wired to deliver therapeutic doses of electricity.

Ms. Pajer’s charming tale is the third in her Professor Bradshaw mystery series. She wastes no time in setting up the various potential villains and entanglements among them. Her crisp and witty dialogue adds to the entertainment. The period piece is true to the knowledge and science of the early 1900s; however, it’s not the least bit stuffy or stuck in time. The reader is provided with a glimpse at a part of life back then that is usually not known today. The Washington Academy of Sciences founded in 1898 has granted its seal of approval for the accuracy of the scientific content in Capacity for Murder.

The scientific nature of this story bears a strong similarity to the mysteries written by the Jefferson Bass duo and Patricia Cromwell. Fans of their novels would be wise to add Bernadette Pajer to their favorites.

A review copy was provided by a publicist.

A review of Perfect Reader: A Novel by Maggie Pouncey. 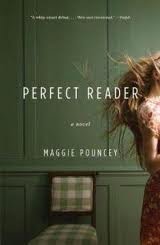