I Still Miss Someone 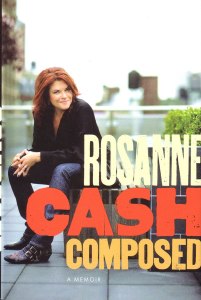 Rosanne Cash’s memoir starts off flat and rather dull before it kicks into gear; it then becomes more engaging with every page.   Composed has the same type of non-chronological structure as Bob Dylan’s Chronicles, which perhaps is not an accident as Bob gets a lot of play in this account of the life of Johnny Cash’s daughter.   It almost goes without saying that this is also a first-hand tribute to her late father, the Man in Black.

“On Friday, September 12, air had still gone in and out of his lungs; he had moved his limbs and made sounds.   He had actually squeezed my hand and lifted his eyebrows.   It was a difficult day, the last day of my dad’s life, but not unbearable to me.   The next day, the beginning of my dad’s life in the past tense, was unbearable.”

Rosanne paints her father as a man with faults and addictions (brought on by a jaw broken during dental surgery), but also as a loving man who quietly gave guidance to his daughters.   She came to take him for granted during his life – always sharing him with the world – but has found life difficult without him.

Early in his career Bob Dylan wrote songs based on dreams, and here Rosanne points out that her life has been shaped by a series of remembered dreams.   One of them involved Linda Ronstadt and Cash’s realization that she had been faking it in her career to that point, afraid to take serious chances.   After having that momentous dream, Rosanne resolved to work harder, especially as a serious songwriter.

Another dream involved her father and her need to let him go:  “When I woke…  I felt relief.   It was no longer my job to take care of him, as he was being taken care of, wherever he was.   The legacy of his work was intact, in my dream preserved as carefully and conscientiously as if it had been in a museum.   Something settled…  I could let him move on now.”

One surprise about reading Composed is finding out that Johnny Cash’s daughter is far more a fan of rock musicians than country singer-songwriters.   Yes, she has her idols and heroes in the latter category but she was heavily influenced by Dylan, Ronstadt, Joni Mitchell, Janis Ian, James Taylor, Bruce Springsteen and the Beatles.   All of these influences seem to have come together in her biggest hit single, “Seven Year Ache.”

As with the afore-mentioned Chronicles, Rosanne Cash writes in a style that is so unique it could not have been ghostwritten.   She has been a long-time student of words and she finds just the right ones to accompany each and every tale of her life told here.

“If Magritte had painted my childhood, it would be a chaos of floating snakes, white oxfords, dead Chihuahuas, and pink hair rollers.” 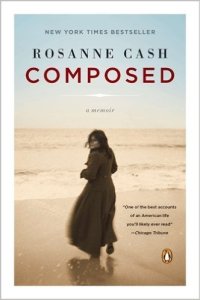 Perhaps the biggest compliment that can be paid to a memoir is to say that it enabled the reader to come to know the person who wrote it.   Having read Composed, I feel that I now know Rosanne Cash and I like her.   I look forward to hearing more of her music.   As a songwriter she’s joined her idols as one of the best.