Yesterday When I Was Young

“…nobody knows you better than someone who knew you back then.”

If you’re about to attend a high school or college reunion, you may want to prepare yourself by reading Claire Cook’s rollicking and engaging tale. (Cook is the author of Must Love Dogs, which was made into a film with John Cusack and Diane Lane, and Wallflower in Bloom. She began writing at the age of forty-five.)

This is the story of Melanie, a happily married woman living in a beach town in New England. She’s happy until her husband informs her that she’s being dumped for another woman. Melanie is so crushed that she refuses to work out the separation/divorce arrangements with her husband.

It appears that Melanie is going to wallow in her pain and discomfort — augmented by heavy doses of alcohol — until she gets an e-mail message from Finn Miller, a guy that she had a crush on in high school. This is the same guy who barely noticed her back in the day. Now Finn tells Melanie that he’s been having dreams about her (“…we started making out… Was I a good kisser?”) and can’t wait to see her at their upcoming high school reunion.

To get to the reunion, Melanie and her BFF B.J. decide to drive a classic Mustang through several states; this in itself is a fun ride. “After accompanying Melanie and B.J. on their hysterical road trip, readers will feel like they’ve made friends for life.” (Kirkus Reviews) B.J., a self-anointed expert, produces some funny lists of things that one should and should not do at a high-school reunion. But she and Melanie are equally unprepared for what’s about to happen once they encounter their former friends and classmates.

“I hadn’t realized just how many hopes I’d pinned on the reunion until the bubble burst. It was ridiculous, but it still left me feeling lost and rudderless.”

What does it mean that Melanie suddenly goes from having no one to three different suitors? And how is it that “know-it-all” B.J. crashes and burns during prime time? You’ll need to read this uplifting chick-lit book to find out. Suffice it to say that Claire Cook’s novel helps to explain why some must revisit the past before being ready to encounter — and accept — what life holds for them in the future.

“Reading Claire Cook might be the most fun you have all summer.” Elin Hilderbrand. True. Grab this read before the summer is over!

A review copy was provided by the publisher. “Charming, engagingly quirky, and full of fun. Claire Cook just gets it.” Meg Cabot

What happens when a man who is obsessed with food is denied the taste of it?

“I have spent years of my life obsessing about my weight, feeling guilt over every mouthful.   Jon Reiner’s magnificent and devastating memoir accomplished the impossible.   It made me shut up and enjoy my food.”   Ayelet Waldman, author of Red Hook Road

“An engrossing and candid memoir…  fearless and singular.”   Publishers Weekly

On February 13, 2009, Jon Reiner – a James Beard Foundation Award-winning food writer – had just returned home with the week’s groceries (a task for this stay-at-home dad) when a near-fatal complication from his chronic battle with Crohn’s disease left him writhing on the floor in pain.   He was in desperate need of medical attention.

After emergency surgery to save his life, Reiner was placed on TPN (Total Parenteral Nutrition), meaning he was to receive nothing by mouth for 3 full months…  No food, no water, nothing but nutrition delivered by intravenous means.

“For a hospital patient, a (TPN) order is a condemnation.   It translates…  to: ‘starving on intravenous drip while your roommate groans over the vulcanized chicken, limp penne, and lumpy custard on his tray.'”

This memoir is the story of how Reiner’s body and his marriage – which had suffered from the stress of a chronic and potentially fatal illness – came to be healed at a difficult time in his life.   Kirkus Reviews called it, “An amazing, incredible tale.”   John McEnroe said, “I will never take eating for granted again.   Wow!   What a roller coaster.   All I kept thinking was, you cannot be serious!   But he was.”

You may want to eat dinner before you attend!

“The sins of a family always fall on the daughter.”   P.F. Sloan

“She already knew the hard edges of the world, knew that life disappointed and that most people’s dreams never did come true.”   Lisa Unger

This one is a stunner.   In Fragile, author Lisa Unger tells the story of four fragile lives that are joined together by events separated by twenty years.   Unger’s genius is in plotting the story so that the reader never knows what’s coming next.

The story starts with a look-in at what appears to be a crime being committed, although the facts are not clear.   What is clear is that a young woman, Charlene, has gone missing.   She intended to run away from her sleepy community, The Hollows, in New York State in order to make music in Manhattan.   But she’s suddenly fallen off the face of the earth.

The residents of The Hollows, including the young woman’s mother and her boyfriend Ricky’s parents, are forced to revisit their memories of a high school girl named Sarah who disappeared two decades earlier.   She was found dead, mutilated; a crime to which a male classmate confessed.   But the young man who said he killed her was troubled and perhaps mentally unstable.   He went on to spend years in state prison, before he died by his own hand.

With this background we fear that Charlene has been abducted or murdered by the evil force or forces that killed Sarah.   Charlene’s mother was a classmate of Sarah’s, as was Ricky’s mother, Maggie and his police detective father.   These adults are all keeping secrets about their lives both now and at the time that Sarah was killed.

Others in the community also know things about the events surrounding the past crime, but they’re not talking.   The residents of The Hollows become frozen with the fear that they are reliving a nightmare and elect to hide rather than speak.   With little information to go on, the local police force begins to suspect Ricky’s involvement in Charlene’s disappearance.   Charlene did, after all, stand him up on the night she left home and had informed her friends about another boyfriend in New York City.

As the tale proceeds, we see that there are no perfect families in The Hollows.   The parents criticize their children for doing the very things they did when they were young, and this simply piques the desire of the young to escape as soon as they can.   The current mystery, the apparent crime that surrounds the disappearance of Charlene, will only be solved by confessions.   Because there may very well be links between what may have happened to Charlene and what happened “twenty years time ago” to Sarah.

“As she told them all about her buried memory, she felt an awe at how their separate lives were twisted and tangled, growing over and around each other…  And how the connections between them were as terribly fragile as they were indelible.”

There will be no hints here – no spoiler alerts needed – as to the fate of Charlene and Ricky, except to note that Unger convinces us that everything in life is so well-connected (if hardly explainable).   The past is, indeed, prelude.   This is a read that will stay with you.

A review copy was provided by the publisher.   Fragile will be released as a trade paperback book on May 17, 2011. 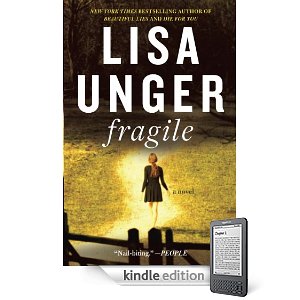 This is a fascinating novel by Min Jin Lee, but then it would have to be to pull a reader through its 560 pages.   The telling of the story, though, has its faults which helps to explain the divergent reviews upon its initial release.   One reviewer found it to be “extraordinary,” another found it to be the “best novel” he’d read in a long time, and another said it was “a pleasure” to read.   But Kirkus Reviews decided that it was “fitfully entertaining but not extraordinary.”   Well, perhaps this is a story that the reader simply loves or can do without…

Millionaires is set within the multi-generational Korean-American community that inhabits the Bronx and Manhattan boroughs of New York City.   This is primarily the story of one Casey Han who graduates from Princeton and may serve as the alter ego of the author, a Yale and Georgetown Law graduate.   Casey finds that her Ivy League degree fails to open the doors of success for her, and she knows and believes that she’s seen as a failure by her parents.   She’s also unlucky in love which calls forth one of the issues with this initial novel from author Lee.   There’s far more soap opera than needed, and it seems that every adult who occupies the story cheats on a loved one (spouse or partner) and then feels compelled to confess his/her infidelity.   This seems just a bit over the top.

To her credit, Lee inhabits the tale with numerous fascinating characters, about equally divided between Korean-Americans and non-Koreans.   The main character, Casey, works on Wall Street – underemployed for her level of education – and comes into contact with Type A Caucasians and super-ambitious Korean-Americans.   One would think, however, that in the real business world some of the Asians in the city would happen to be Japanese, Chinese, Filipino, etc.

Then there’s the conflict and tension that the author seems to feel about her own people.   There are many – probably too many – negative statements made about Koreans; some stereotypes, some quite troubling.   Here’s a sampling:

“Everything with Koreans, Casey thought, was about avoiding shame…”

“Korean people like her mother and father didn’t talk about love, about feelings…”

“… Casey was an American, too – she had a strong desire to be happy and to have love, and she’d never considered such wishes to be Korean ones.”

“… she came from a culture where good intentions and clear talk wouldn’t cover all wounds.”

“This is why I never work with Koreans.   They are so goddam stuck.   You must choose yourself over the group.”

There’s also an instance where Casey thinks about Korean weddings and the “five hundred uninvited guests” who show up at them.   Ah, well, maybe Lee felt the need to include some material to get the novel some attention.   In this respect, it probably worked.

The story is actually much more about the conflict between the “old country” family members, and the younger “new country” and “American” relatives who view the world very differently.   In this respect, it could have been set among any multi-generational ethnic group.   In the end, both love and forgiveness – massive doses of each – are required to get past the intra-family differences that exist.

The author is talented and I look forward to her next work, which hopefully will be less narrow in scope.   Free Food for Millionaires…   flawed…   recommended…  but just barely.

Note:   Thank you to Daniel D. Holt, co-author of Korean At A Glance: Second Edition, for providing technical assistance on this review.