Get Off of My Cloud

Record company executives often told Andrew Loog Oldham, the first manager of The Rolling Stones, that they would “never get anywhere” unless they dumped their generally mumbling lead singer, one Mick Jagger.   Of course, those executives were wrong and Philip Norman serves up these types of gems while delivering a Behind the Music-style account of the lead singer’s life.

One of Norman’s strengths is that he tends to call things in a supremely honest fashion.   He states that the music of the Stones “sounds as fresh (today) as if recorded yesterday” (something that’s likely up for debate), and he labels the band as the “kings of the live performance circuit” – both yesterday and today.   Still, he admits that the music of the Stones – with one possible exception – never “seriously competed with the Beatles.”   It was in the Winter of 1966 that the Stones released Aftermath which Norman views as one that challenged the Beatles’ Revolver.   Well, not really…  Aftermath was a very good, traditional rock album which, looking back, does not match the daring experimentation of Revolver.   It was if the Stones were content to stay in the present while The Beatles were creating rock’s future.

Norman’s engaging, relaxed style also benefits from a fine use of humor.   For example, in describing the release of the song Satisfaction in Britain, he notes that it “(nauseated) almost everyone over thirty.”   And the Prologue to Mick Jagger is labeled “Sympathy for the Old Devil.”

The problem is, in the words of a Beatles’ song, that “It’s All Too Much.”   Most presidential biographies don’t run 622 pages, and some quite reasonable editing could have reduced this account by a good 200 to 225 pages.   There are words, paragraphs, stories and more that could have been left out without harming the narrative.   More is not always better, and Norman seems to be desperately trying to compensate for the fact that Jagger has refused to assist any biographer, the singer always insisting that he has virtually no memories of events in his distant or even recent past.

What one should expect, after plowing through hundreds of pages, is to find some sense of the subject’s character, his nature,  his essence.   I note three things missing from this overly long treatise on Sir Mick: his mind, his heart, his soul.   That’s a lot that’s missing, and it may be that Jagger is such a clever butterfly that any attempt to capture him and place him under glass is futile.

One would suspect or expect that a biography of a singer-songwriter-musician would deal mostly with the person’s music.   That’s not the case here.   Andersen’s quite tawdry bio of Mick Jagger might have been subtitled A Salacious Sexual Biography.   Yes, readers, there’s little about The Rolling Stones music in this account – other than some interesting background on the development and failure of the Her Satanic Majesties Request album – and what is contained within the pages are events you’ve read about elsewhere.

“Marianne’s (Faithful) ex-husband…  certainly appeared to be in a position to know who was sleeping with whom.”

What you likely won’t read about elsewhere are the specifics about seemingly every sexual encounter – with males and females and housekeepers – that Sir Michael (Mick) Jagger has had in his lifetime.   (Based on this account, that’s about 1% of the population of the earth, and may include a few aliens from other planets.)   The writer seems to  not only find these details interesting…  He appears to be obsessed with them.   Sadly, he does not provide a reason for us to care about these personal encounters as the nexus between the sex and Jagger’s – and the band’s – musical creations (with a couple of rare exceptions) is missing.   In other words, what’s the relevance of a bedroom diary?

This is clearly an intimate biography that’s supposed to sell based on its titillation value.   However, and you’ll have to trust me on this, the reader’s patience for dealing with “shocking” material is pretty much used up in the first 100 pages.   After that, it’s just more and more of the same jaded tales.

It’s a missed opportunity as Andersen has a nice, engaging and flowing writing style that makes for quick reading; but, there’s no substance for the music lover to grab onto.   Andersen’s also a bit too fawning when it comes to Jagger, meaning there’s minimal critical perspective or analysis of his subject’s actions.   Further, it’s hard to know what’s real and not real, true or untrue, in this telling as the listing of the author’s sources is quite vague.   A number of the “facts” cited seem to be at least questionable without authentication.

Even if every sexual event listed in Mick were to be documented, the question remains as to what it all means for the curious and/or Jagger’s fans?   The overly spicy details might have been interesting when Jagger was still a young man, but he’ll be 70 in July, and his most loyal fans are enjoying their retirement.   Why is it, exactly, that we need to know now about what happened back in the day? 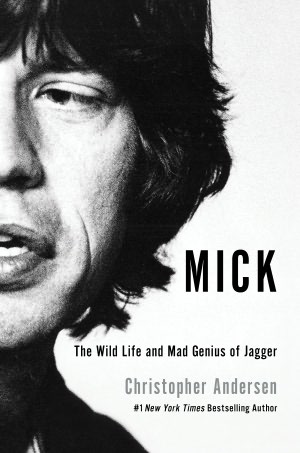 This is a biography that reduces its subject to an almost microscopic level.   Jagger, a very successful artist in and of his time, comes off as a .5 dimensional character.   As Mick himself once sang, “What a shame.”