Giving Away the Books 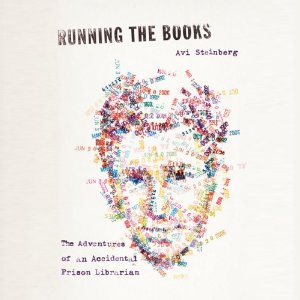 Thanks to Doubleday Publishing, we have three (3) copies to give away of a memoir that was released just a week ago today, Running the Books: The Adventures of an Accidental Prison Librarian by Avi Steinberg.   This hardcover release with a Deckle Edge has a value of $26.00 and runs 416 pages.   Here is the official synopsis:

“Avi Steinberg is stumped.   While his friends and classmates advance in the world, he remains stuck at a crossroads, unable to meet the lofty expectations of his Harvard education and Orthodox Jewish upbringing.   And his romantic existence as a freelance obituary writer just isn’t cutting it.   Seeking direction – and dental insurance – Steinberg takes a job as a librarian in a tough Boston prison.   Over time, Steinberg is drawn into the accidental community of outcasts that has formed among his bookshelves – a drama he recounts with heartbreak and humor.   But when the struggles of the prison library – between life and death, love and loyalty – become personal, Steinberg is forced to take sides.   Running the Books is a trenchant exploration of prison culture and an entertaining tale of one young man’s earnest attempt to find his place in the world while trying not to get fired in the process.”

Here are some early comments on this book:

“Acidly funny…  Steinberg proves to be a keen observer, and a morally serious one.   His memoir is wriggling and alive – as involving, and as layered, as a good coming-of-age novel.”   Dwight Garner, The New York Times

If you would like to try to win one of the three available copies of this unique – and clearly funny – memoir, just post a comment here or send an e-mail with your name and e-mail address to Josephsreviews@gmail.com .   This will count as a first entry.   To submit a second entry, tell us briefly about the most unusual or strange job you’ve ever had.   Did you like it or hate it?   Did you learn anything from it?

This is it for the complex contest rules.   To be eligible for this giveaway, you must live in the continental U.S. and have a residential mailing address.   Books cannot be shipped to P. O. boxes or business-related addresses.  As always, the winners will be drawn at random by our experienced contest administrator, Munchy the cat.   (Munchy reserves the right to change this contest’s rules and/or dates at any time.   That’s because he’s the boss.)

You have until midnight PST on Saturday, November 20, 2010 to get your entry or entries in.   Good luck and good reading!

A Simple Question, Not So Easily Answered by Joseph Arellano

One seemingly easy question facing a book reviewer is – When should a book review be published?   Yet the answer varies greatly – and surprisingly – in the publishing industry.   I say surprisingly because I once wrote music reviews for a college newspaper.   At that time, if one asked when a record album review should be published, the answer would be “any time is fine.”   Record companies did not seem to care whether their albums were reviewed prior to release, on the date of release or even days, weeks or months later.   (Today you can find books with recent reviews of record albums that were released decades ago.)

Major publishers have so many different policies on book reviews that it’s a wonder they’ve been able to agree on an International Standard Book Number (ISBN).   One publisher wants no reviews posted prior to the date of release because, in their view, people get angry if they read about a new release and can’t find it at their local Barnes and Noble or favorite independent bookseller.   Another says a review is OK if it is posted one week or less before the release date.   Several publishing houses encourage book reviewers to post their reviews within the first one or two weeks following the book’s release.

If this isn’t confusing enough, a few publishers indicate that they do not embargo reviews.   In other words, if a reviewer has a galley or advance review copy (ARC) of a future release in his/her hands and wants to write about it now, that’s fine.

There’s similar confusion over posting pre-release excerpts; so-called sneak peeks.   Some publishers won’t allow them.   Some will allow them if the reviewer requests permission, and will then respond with specifics as to when the excerpt can be posted online or in print.   Ironically, some of the publishers who do not allow the posting of pre-release excerpts themselves post them on their websites or on online sites which cater to librarians and booksellers!

Then we have the policies of book review publications to which reviewers like me submit reviews.   Some want only reviews that they’ve received prior to the book’s release date so that they can post on the date of release.   Some review only new releases (often in hardbound form) but not the subsequent popular re-releases in trade paperback form.   Some, like this publication, review new releases and those re-releases missed the first time around.   It all means that a book reviewer needs something akin to a flow chart to track which policy applies to which publisher, and which policy applies to which publication.   Oh, my!

Why do things have to be so confusing?   I have no idea, except that if a publishing company foots the bill – and assumes all the risks of failure – it is fair to assume that the publisher can call the shots.   However, if I ran a publishing house – let’s call it Brown Cat Books for the purpose of illustration – I would have no problem with reviews of BCB releases running at any time.   Why?   Because from everything I’ve read, publishers must rely on the sale of back catalog books to keep them in business.

Think about high school and college students, and boomers who walk into a Barnes & Noble or community bookstore these days.   How many of them would you guess are buying a book that was released more than a year or two ago?   Perhaps not half of them, but it’s probably a higher number than your first guess.

Despite my view, one source has written that the expiration date for buzz to be generated on a new book is its release date.   In this source’s view, if people are not talking about it – and reading about it – on the first day it is sold, it is not likely to become a best seller; which translates into dead on arrival.   Yes, of course, there are and have been spectacular exceptions to this “rule” – two examples being The Time Traveler’s Wife and The Lovely Bones.   These are popular fiction releases that took months and years to become overnight best sellers.

This reviewer simply wonders sometimes why things are as they are in the publishing trade, but then I can’t complain.   I just need to remember to continuously update my Publishers and Publications Review Policies flow chart.

Pictured:  The Stuff That Never Happened: A Novel by Maddie Dawson, which will be released by Shaye Areheart Books on August 3, 2010.