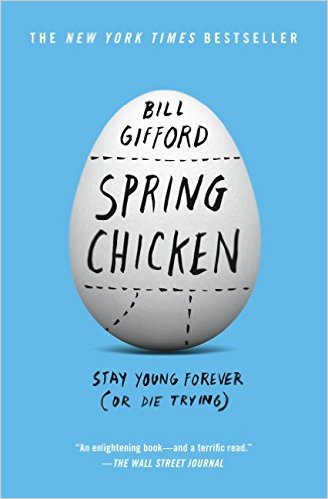 Spring Chicken is a book with an intended audience. You should read this book only if you are interested in living longer. 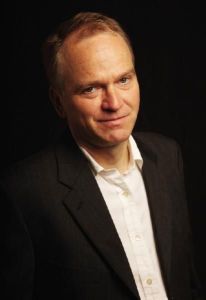 Bill Gifford is a rather average guy, with a receding hairline and a bit of a beer gut, who decides to investigate how to live to and past the age of 100. It’s pretty tricky stuff, especially since “your risk of dying doubles roughly every eight years.” What?

When we’re young, the risk (of dying) is fairly minimal; there isn’t much difference between age twenty-five and, say, thirty-five. But thirty-five to forty-five is a big jump, and by fifty our peers are popping up with breast cancers and colon cancers and high blood pressure and other scary ailments.

Yes, this death business is pretty scary stuff. But Gifford handles it with a great deal of humor and more than a dab of self-deprecation. The surprising thing is that, other than being born with good genes (such as the writer’s grandmother in her late 90s who eats an unhealthy serving of rich pastry each and every morning) and doing one of two things, he finds that there are no magic bullets to avoid aging. The key – how simple is this? – is not to avoid aging but to avoid aging as quickly as others in your peer group.

Gifford notes a harsh reality, that at a high school or college reunion of individuals the same age, some will appear to be older than their classmates and some will appear to be younger. This is, to some extent, the luck of the genetic draw but is also a reflection of lifestyle. (The individual who appears to be younger – such as the old friend who has retained a full head of hair, bright eyes and sparkling nails, may in fact be healthier; although this is not a hard and fast rule.)

Gifford’s self-assigned job was to find out what factors result in a person living a longer and, more importantly, a healthier life. He discovers that there has not been much substantive progress in this venture. Why haven’t we devoted as much time and energy to improving and extending human life as to, say, putting a man on the moon? To be sure, science and medicine are working to eliminate deadly diseases but whenever one is conquered another one pops up to take its place. (Gifford provides a logical explanation of why we age and die. Some of it has to do with the fact that the resources of our planet are limited. But the key is that human life is tied to the survival of the species, not the individual. Aging, in fact, is a visible signal to the world that we’ve moved beyond our essential, critical breeding years.)

If there’s no magic to aging slowly and extending life, what things can be done? First, as a research scientist-physician tells Gifford, “It’s very simple. Get off the couch.” Exercise is the drug. And it need not be strenous, back-breaking exercise. You can walk, jog, swim, or play tennis or golf. Almost anything done regularly which involves movement helps to extend health and life. (However, sports that involve stress and torque, like tennis and golf, are highly problematic for aging backs.)

Exercise is key because mobility is essential. Without mobility – and this is true in humans as well as for animals in general, disease and death are never far away. In Spring Chicken, Gifford includes practical tests that one can use to self-measure mobility.

So, exercise is one key factor in terms of longevity. Remember that Gifford discovered two important factors. However, no spoiler alert is needed as I’m not going to disclose the second factor here. You will need to purchase the book to learn that rather surprising “secret.” 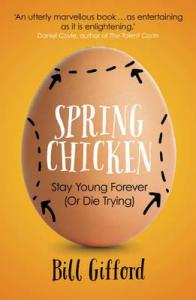 Read this book and stay young forever! Or, die trying.

“Gifford’s survey of those who study aging and those who claim they can slow it down or stop it makes for a great read.” The Washington Post 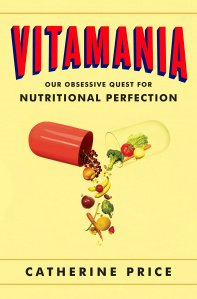 If you read and enjoy Spring Chicken, you may also want to consider Vitamania: Our Obsessive Quest for Nutritional Perfection by Catherine Price.

The Girls from Ames: A Story of Women & a Forty-Year Friendship by Jeffrey Zaslow

“There were times…  when Kelly felt desperate, confused and shattered.   But she also felt embraced and loved.   And that sustained her.”

There are books that you read, and put down because they are not what you expected.   This is a book that you will read and occasionally put down for another reason – in order not to finish it too quickly.   It is a book to savor and embrace, whether you are female or male.

This is a nonfiction tribute to a 40-year-old friendship among the 10 surviving members of an 11-member high school clique.   They are a group of women who “reached maturity in the age when feminism was blooming.”   They grew up with the theme of empowerment resounding in the air.   Consider that on TV they watched not “I Love Lucy” or “Father Knows Best” but instead “Wonder Woman”, “Bionic Woman” and “Charlie’s Angels.”

The original group of 11 girls – Karla, Kelly, Marilyn, Jane, Jenny, Karen, Cathy, Angela, Sally, Diana and Sheila – grew up in the relatively small community of Ames, Iowa; a place where they were literally surrounded by corn fields.   The corn there grows so high that it can hide cars.

This is a telling of the lives of this group (a real-life version of the story told in the novel The Group) and their lives are touched with successes, tragedy, divorce, illness and death.   The outgoing Sheila was to die in her twenties under strange circumstances that have never fully been resolved.   In addition, the children of the group members have been affected by serious illness and two members of the remaining group have battled breast cancer.   On the flip side, a member of the group first became a mother at the age of 45.

“Having a close group of friends helps people sleep better, improve their immune systems, boost their self-esteem, stave off dementia, and actually live longer.   The Ames girls just feel the benefits in their guts.”

This book does its best in focusing on why it is vital for women “to nurture female friendships.”   We’re told, for example, “Research shows that women with advanced breast cancer have better survival rates if they have close friends.”   The matter of the peace and acceptance that accompanies aging is also well noted in The Girls from Ames.   “By their mid-forties, women know they’re at a crossroads.   They are still holding on to their younger selves, but they can also see their older selves pretty clearly.”

The one aspect of the book that may be slightly troubling is that males, particularly husbands and fathers, tend to come off as pale by comparison.   The men in the lives of these women are depicted as not being highly communicative, especially among other men (that is not how they get their needs met), and yet, they are generally well-loved.   At one point the women of the group are asked to rate their husbands/partners, and the average score came out to 8.2 on a 10-point scale.   All in all, a very good score!

One man was asked to consider reading this book and he declined sending this message via e-mail:  “Unfortunately, I do not have plans to read the book, but please convey to the girls from Ames that I think they are pretty hot.”   That was from Tom (60 years old) in Ohio.

The girls from Ames are now mothers and female role models in their own communities.   But most of all they remain the best of friends.   They are friends, survivors and a mutual support network.   They have all been battered a bit by life and, except for the still greatly missed Sheila, they have made it through.

This would be a great selection for almost any book club, even one that includes a male or two.   The very best news is that the story of the women from Ames will continue.   The 13 daughters of the 10 women are extremely good friends.   Bravo! 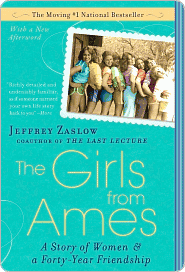