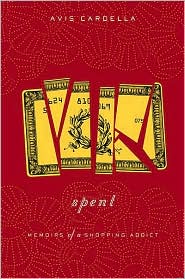 “I used shopping to avoid myself.”

Be prepared for a brutally honest, yet somewhat elusive account of Avis Cardella’s journey into, and recovery from, the nearly overwhelming habit of shopping and shopping and shopping.   Alongside her own story, Cardella incorporates general information regarding the evolution of shopping in excess beginning with Madame Bovary up through today.   This is no laughing matter.   The prevalence of shopping as therapy or a habit is so great that the next edition of the Diagnostic and Statistical Manual of Mental Disorders may contain “compulsive shopping disorder” as a separate listing rather than an entry under the heading of obsessive compulsive disorders.

The mix of confessional talk, some statistics and the events that were pivotal in the author’s life and, more importantly, her relationships with men, surround her almost as if she were dancing around herself, changing costumes as she assumed roles.   There is so much numbness expressed in the narrative that is almost like seeing her through a blanket of fog – not hot or cold, just thick and obscuring.

Cardella was drawn to fashion at an early age.   As a girl she had a regular supply of magazines like Vogue, Cosmopolitan and Glamour that her mother purchased faithfully each month.   This mother-daughter duo spent their best time together on shopping expeditions.   Cardella’s mother loved dressing up, especially in costume-like outfits.   Sadly, she died at an early age which left a gaping hole in her daughter’s life.

Jobs became a means to enable shopping, first as a teen employee at Macy’s and then as an adult flight attendant.   That first Macy’s card was managed well as were her purchases.   It was only later that the spending got out of hand.   Cardella writes of her precipitous decline into a world of shopping that sounds more like a drug addiction than the usual garden variety retail therapy most people indulge in once in a while.   She describes it as being taken over by need and experiencing a trance-like state when wandering through stores in Manhattan.

The lure of fashion is hard to resist in this book and Cardella has an amazing talent for describing the garments and accessories that became part of her.   Each page contains at least one designer name or a reference to the lifestyle she sometimes lead that went with wearing the best labels money, or credit, could buy.   In all honesty, this reviewer had some vivid recollections of her first pair of flats, in an awesome turquoise color and a champagne-colored taffeta dress worn to dancing classes in junior high school.

Cardella readily admits that her wardrobe began as mix-and-match pieces acquired without a strategy or goal in mind.   This wardrobe could easily be a metaphor for the way she lived acquiring relationships.   After all, if you don’t know yourself, how can you possibly know what will suit you?   She had no real sense of the future, nor did she make plans.

The writing style is calm, even and well-spoken with the exception of a few minor grammatical blunders and three funny homonyms (peak for peek, weary for wary, and reeled for railed), that crept in along the way.   Two thirds of the way through the book, this reviewer found herself wondering how far a shopping addict has to go to hit bottom.

The takeaway from Spent  is that stuff has power!   Whether that power is good or bad may depend upon the strength of the individual acquiring the stuff.   Highly recommended for moms and daughters.

This review was written by Ruta Arellano.   A copy of the book was purchased for her by her husband.