Tag Archives: Memories of the Grandmother…

A Day in the Life 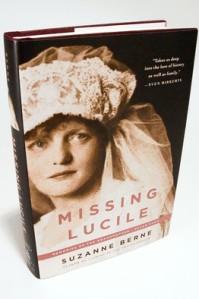 “He had lost his mother when he was a little boy.   He’d hardly known her…  I wished I could give his mother back to him.”

Missing Lucile is a loving, lovely and lively account of the life of Lucile Kroger Berne, the grandmother that author Suzanne Berne was never to meet.   Lucile graduated from the prestigious and challenging Wellesley College in 1911, was married in 1923, gave birth to two children and died in 1932.   Hers was a short life and the author’s father was just 6 when his mother died.

Lucile was a member of THE Kroger family of Cincinnati, her own father being the founder of a grocery empire that today is worth billions of dollars.   Despite being part of such a prominent family, little was known of her life.   As Suzanne Berne writes early in her account, “Lucile has slipped out of memory…”   That is, until the author stumbled across a history of the Kroger family which provided her with the outlines of the story that is told here.   She also found developed and never-before-developed photographs that helped her to fill in some gaps in Lucile’s story.

Suzanne Berne’s father was in his eighties when she began trying to put the pieces together to create a living, breathing, woman named Lucile.   She has largely succeeded in this effort, even putting to rest some family myths.   For example, it was said of Lucile that she never smiled, but the reader sees photographs of Lucile smiling – even while her college graduation photo is being taken – and reads accounts of her being almost hysterically happy.   This is what happens in real life.

Suzanne Berne spent a great deal of time conducting research at the Wellesley College library, and a large part of this biography involves the time that Lucile spent there – a period she often referred to as the very best period in her life.   And, yet, despite the author’s best efforts some riddles remain as such…  “Every life has its blank squares.”   (Lucile was captain of the Wellesley Running Team until she dropped out for a reason that is still unknown.)

Senator Robert Taft’s wife once said of Lucile that she was, “The only one in the Kroger family with brains.”   She was also an adventurous person, a young woman who went to France just two weeks after the end of World War I; her intent being to fulfill the mission of Wellesley’s graduates – to minister to others rather than being ministered to.   There it seems she may have engaged in a romance with a military man.   Perhaps.

Perhaps is a word often used by Suzanne Berne in this work, because filling in the blanks on a life requires some guesswork:  “In my opinion, writing about other people requires a certain stupid bravado – a willingness to chat up the unknowable.   Especially since what you don’t know about someone is always going to be more interesting than what you do…”   But this account is plenty interesting enough in telling the reader what’s known about the life of Lucile Berne.

The manner in which Suzanne Berne fills in “the unknowable” is charming (this is a novelist applying her creative skills to tying the events of a life together).   The author writes about a woman she never knew in a tone that is filled with love and respect.   The reader will suspect that Suzanne Berne sees a large part of herself in her late grandmother, a feeling that haunts many grandchildren.

“…everyone’s life is a promising novel when reduced to a few lines in a reunion record…  every yearbook is full of promising-looking people who have no idea what will happen to them.”

Suzanne Berne’s father died in 2009, but not before he was able to read the majority of the manuscript that makes up this unique portrait.   His daughter Suzanne provided him with an invaluable, lyrical, account of his mother’s life – one that turned a ghost back into a living person, a woman with strengths and weaknesses; a woman who won and lost in life; a woman who lived a life in full before her early passing.   What a tremendous gift!

Lucile Berne’s life is now well accounted for, and it is well, well worth reading.   Highly recommended.