A Unexplained Death: The True Story of a Body at the Belvedere by Mikita Brottman (Henry Holt and Co., $28.00, 288 pages) 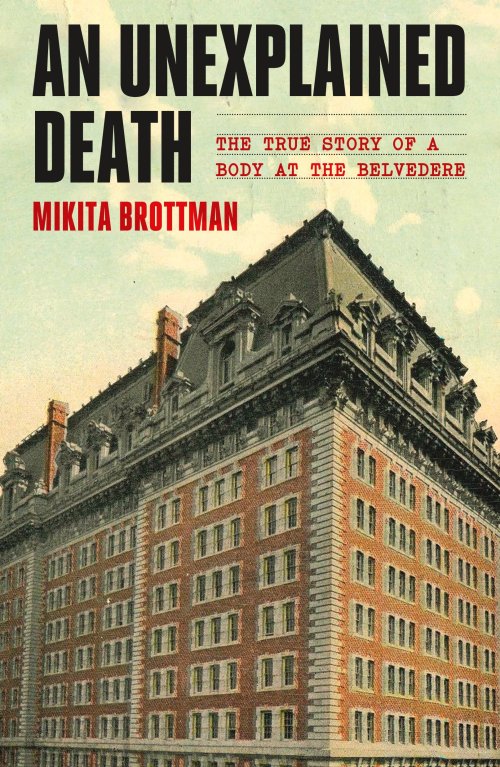 Author Mikita Brottman lives at the Belvedere Hotel, a Baltimore landmark with a long history of strange occurrences, suicides, and mysterious deaths.  Brottman here professes her fascination with the occult, tarot cards, and suicide so the examination of the apparent 2006 suicide of Rey Rivera – a once-fellow resident of the Belvedere, would seem to be a perfect topic for her writing.

Brottman’s account of events, An Uexplained Death, provides numerous details surrounding Rivera’s death as well as a tremendous amount of conjecture on her part.  What it fails to do is to provide clarity or new information beyond what was already known or presumed. (The authorities found the death to be a suicide.)  Brottman goes on – in what seems like a stretch – to explore cultural attitudes about suicide from around the world, and she provides her personal views on various matters whether related or not.

Rey Rivera was a tall and attractive aspiring film maker who moved to Baltimore from Los Angeles with his new wife, Allison.  He joined with Porter Stansberry of Agora, publishing newsletters offering financial advice.  His death happened to come at the time when he had borrowed money to produce his own film, was getting ready to quit Agora – which was engulfed in an SEC investigation – and was about to move back to L.A.

Did Rivera jump from the roof of the Belvedere, falling through a skylight at the top of a space which once housed the hotel’s swimming pool, or was he running from someone intending to do him harm?  Brottman investigates various alternatives to suicide possibilities, but none of them seem either likely or probable.  She wonders aloud whether Rivera was depressed about the Agora investigation or whether he became entangled in a homosexual affair.  It’s all so much smoke and mirrors because each such alternate explanation is discarded shortly after being raised.  And Brottman’s conclusion of this strange, quasi-fictional investigation of a real-life death provides nothing of substance.

The story is slightly compelling during the few periods in which Brottman sticks to the subject matter at hand.  But she spends far too much time writing about herself, her life, and her obsessions.  Oh, but for an editor!

The typical reader is unlikely to find Brottman’s affinity for rats very endearing.  The same is true concerning her fascination with strangely committed murders, and the time she spends imagining herself in another person’s shoes (such as Allison Reyes’s).  All in all, this is a book of rambling distractions, which is as generally uninteresting as it is undisciplined.

Dave Moyer is a public school superintendent in Illinois and is the author of Life and Life Only: A Novel.

The Beaux Arts style Belvedere Hotel was opened as Baltimore’s first luxury hotel in 1903 and was converted to residential condos in 1991.

I read the book and wondered why the writer spent an obsessive amount of time attempting to solve a crime which the local authorities had already solved, resolved and literally closed the book on.  – Joseph Arellano