An Interview with Sarah Jio

This is an interview with New York Times and USA Today bestselling author Sarah Jio, whose new book was released on November 26. Joseph Arellano

Q: There are actors who are called method actors. They like to put themselves inside the skin of the characters they play. For example, if a method actor is hired to portray a boxer, he or she will take boxing lessons and box with professionals. I tend to think of you as a method writer, one who inhabits a world before she writes about it. With this in mind, could you tell us about how you prepared to write the novel Morning Glory, which is set on a houseboat in Seattle?

A: Renting a houseboat for four months while writing this novel was the single greatest thing I could have done to put me in the right headspace to capture the essence of the floating home community. I got to soak up little details that I would have never known had I not experienced them – like how a houseboat sways ever so gently on a windy day or how a pair of Mallard ducks waddle up to the doorstep on Saturday morning and gaze in to the French doors. I will forever treasure that time on Seattle’s Lake Union writing this book. 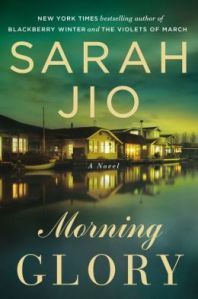 Q: Would you briefly summarize the plot of Morning Glory, your latest release?

A: Here is what is written on the book jacket: “New York Times bestselling author Sarah Jio imagines life on Boat Street, a floating community on Seattle’s Lake Union – home to people of artistic spirit who for decades protect the dark secret of one startling night in 1959.

“Fleeting an East Coast life marred by tragedy, Ada Santorini takes up residence on houseboat number seven on Boat Street. She discovers a trunk left behind by Penny Wentworth, a young newlywed who lived on the boat half a century earlier. Ada longs to know her predecessor’s fate, but little suspects that Penny’s mysterious past and her own clouded future are destined to converge.”

Q: In your novels, women who lived at different times (and who never met) are brought together by unique circumstances. Generally the woman who lives in current times is called upon to resolve a mystery involving a woman who lived 50, 70 or 80 years before her time. It has struck me that in this way each character gets to live twice; it’s a form of time travel. Is there an experience in your life or in your family that prompted you to write about this type of situation? Did you personally solve a mystery involving someone who preceded you?

A: I just smiled reading this question, because, yes – I love the concept of time travel, and I find it so heartbreaking that it isn’t really possible (someday?). I suppose the reason I tend to like to write books in this way is it gives me a chance to look back to the past. I feel incredibly romantic about my grandparent’s generation, and I’ve often thought that I should have been born in 1920, so I could have been a young woman in the 1940s.

Q: In Morning Glory a character states, “I know I may always ache for the past… but I want to be a bird now. I want to flap my wings through the rainstorms. I want to start my day with the earnestness of the morning glory….” Do you find yourself being both past and present oriented?

A: Absolutely, and I remember writing that passage. While I write fiction, yes, there is a lot of my heart and my own personal journey in all of my stories. It is impossible to separate the author from her characters. While they are not always me, I get to create them, and I get to choose favorites. And I often turn to my protagonists as I think about the important elements of life, or big things I’m working through.

Q: One thing I found in common among The Violets of March, Blackberry Winter and Morning Glory is that while your story conclusions are logical, they are unpredictable. Is this something that you strive for – to keep the reader guessing until the last page, or is this simply how the stories play out in the writing process?

A: Yes, I love to be sneaky like that – surprising readers with a conclusion that they didn’t see coming, or some surprising reveal at the end. Because isn’t that true of life? Often it is unpredictable and unchartered. Even the best laid plans have hiccups or surprise endings. And I love carrying this through in my books.

Q: Did anyone in our family or background use the phrase, “True love lives on….” (used by Esther Wilson in The Violets of March)?

A: No, I have never had that uttered to me by a loved one, but I believe it, and I cling to it.

Q: There are characters in your novels that are less than nice and honorable; but in general your stories tend to restore our faith in the best of human nature. Does this reflect a view on your part that while life can be mean and nasty, the better angels of our nature win out? In other words, do we see Sarah Jio’s basic optimism play out in your work?

A: Yes, we are flawed creatures – and that comes out in my books, for sure. At the end of the day, I am an optimist. We get one life, and only so many trips around the sun, and I believe in love and happy endings and beautiful sunsets that make you smile.

Q: Will most of your stories be set in the Seattle area?

A: Not all, but most. My heart is here and will always be. I naturally gravitate to setting my stories in the Northwest, but I’m interested in other locations too, so perhaps I’ll be switching things up in the next few books.

Q: I consider it as a positive that when I read Blackberry Winter, I was reminded of Jamie Ford’s Hotel on the Corner of Bitter and Sweet since the two novels share a similar stage – Seattle past and present – and a journey of personal discovery. I loved both books. Have you met Ford and would you agree that the two novels are bookend-like in scope and theme?

A: I own Hotel on the Corner of Bitter and Sweet, although I haven’t had a chance to read it yet (it is on my nightstand!). I have not met Jamie Ford, but enjoy following him on Facebook and Twitter and I think we’d have a lot to talk about over coffee (and anyone who is not following him on Twitter should – he’s hilarious). Readers have mentioned a similar connection in our books, and it’s a huge compliment to me, for sure.

Note: Before becoming a full-time author, Sarah Jio was the Health and Fitness writer-blogger for Glamour magazine. 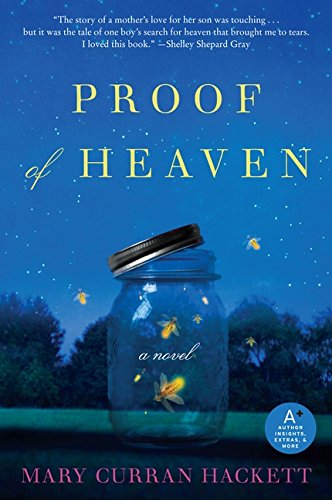 Mary Curran Hackett has drafted a stirring and remarkable, life-affirming novel.   This is the story of a very sick and courageous five-year-old boy, Colm, who suffers from a rare disease that will kill him within two years.   He knows this and wants simply to see the father he’s never known before he departs this earth.

Colm’s mother, Cathleen, is an intensely religious Irish-American Catholic woman who will do anything to extend her son’s life, although she knows that “if her son were a dog, they would have put him out of his misery already.”   This includes taking him on a pilgrimage to the Abbey of San Damiano in Italy in the hope that Colm will be cured by a miracle.

Colm was one of a kind.

Colm’s disease is idiopathic, meaning that its origins and treatments are unknown to the medical world.   Colm suffers strokes  which put him into a condition of appearing to be dead before he returns to consciousness.   Colm believes that he has literally died on at least one or two occasions, and comes to accept that there’s nothing waiting for him after his death.

Colm (pronounced “calm”) is quite reminiscent of the character Tim Farnsworth in the novel The Unnamed by Joshua Ferris.   Farnsworth comes to give up hoping that the medical profession will save him, and he remains – despite having a wife and family – ultimately alone in his struggle against a unique, crippling disease.   Colm also thinks of himself as being alone, despite the smothering efforts of Cathleen to protect him, until a potential savior – a physician – arrives on the scene.

Dr. Gaspar Basu is a man who lost a son at an early age in India, and comes to love Colm as a type of replacement for his late son Dhruv.   Dr. Basu also comes to fall in love with Cathleen.   And so, he installs a pacemaker in Colm’s chest – in the hope of preventing further near-death experiences for Colm and agrees to accompany Colm and Cathleen on their journey to Italy.   Dr. Basu also joins with Colm’s uncle in supporting Colm’s efforts to find his father who was last known to be living as a musician in Los Angeles.

…by Colm’s seventh birthday he hadn’t had any other near-death experiences after leaving Italy.   To Cathleen it was a sign that God was answering some of her prayers.   Colm may not have been physically healed, but at least he hadn’t died again.   Perhaps the worst was behind him.   Perhaps the miracle took… 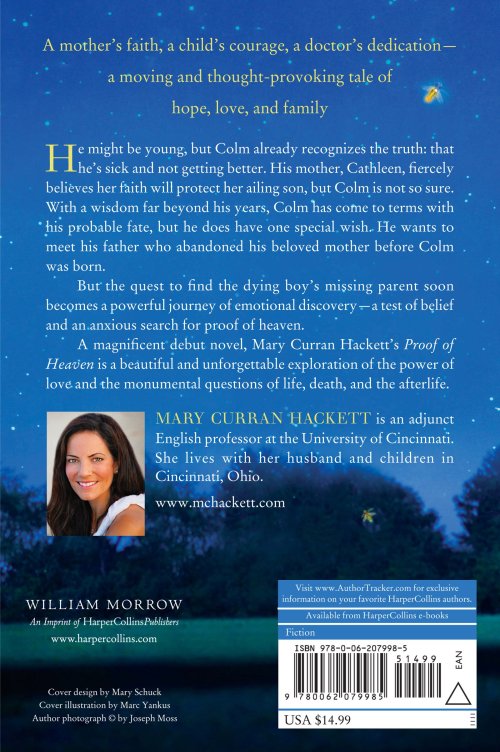 The other details of the story should be left for the reader to discover.   Kudos to Hackett for presenting a real world, gritty, yet soaring tale in which humans must make their own choices between hope and hopelessness (in a spiritual sense).   And rest assured that  once you’ve finished reading Proof of Heaven you may well look at life and its inevitable conclusion in a new way.

“…it was the tale of one boy’s search for heaven that brought me to tears.   I loved this book.”   Shelley Shepard Gray, author of Christmas in Sugarcreek