This is the first part of an interview with author Nora McFarland whose latest book, Going to the Bad: A Lilly Hawkins Mystery, will be released tomorrow (August 7, 2012).

1.  Joseph Arellano (JA):  You live in Macon, Georgia but your Lilly Hawkins mysteries (and Going to the Bad is the third in the series) are set in Bakersfield, California.   Why?

I lived in Bakersfield when I started writing the first book in the series, A Bad Day’s Work.   I’d been a shooter – industry slang for a TV news photographer – and knew it would make a great set-up for a mystery.   I also loved Bakersfield and its quirky heritage.

2.  JA:  Do you periodically visit Bakersfield in order to update the descriptions of the local scenery, or do you write completely from memory?

I visit once a year.   What I like to do is write a rough draft, visit, see how badly I’ve remembered certain details, and then fix it in the second draft.   On that same trip, I can research ideas for the next book that’s not been written yet.   That’s a great way to get inspired.   For Going to the Bad, I had an idea that I wanted a scene set in an oil field, so I spent a day visiting the more accessible ones near Bakersfield.   I took notes on everything I smelled and heard, as well as the terrain.   While there I realized the scene should be a chase, either at night or in the fog when visibility is bad.

3.  JA:  Is there a chance that the character of Lilly Hawkins will someday relocate to the state of Georgia?

The grit and color of Bakersfield are an important part of Lilly’s character.   I’d never move her.   Lilly was born there and she’ll probably die there.

4.  JA:  We’re fellow Trojans, so I’d like to ask you what you learned from attending the University of Southern California (USC) School of Cinema and Television that apply to your writing?

The screenwriting courses I took as part of my degree in production laid the groundwork for everything I’m doing now.   They taught us story structure, pacing, and dialog among other things.   Probably the biggest lesson I took away from those classes was that your main character has to change.   I think that’s the core of drama and storytelling.   Your main character must begin in one place and end in another.

5.  JA:  In an alternate life, you’re not writing books or filming the news.   What would you be doing?

If it’s a fantasy where I could do anything I wanted, then I’d say screenwriting.   I love movies as much as books.

Thank you to Nora McFarland.   Part two of this interview, with five additional questions for Nora to answer, will run in the very near future on this site.   Going to the Bad will be available as a trade paperback book, and also as a Kindle Edition and Nook Book download. 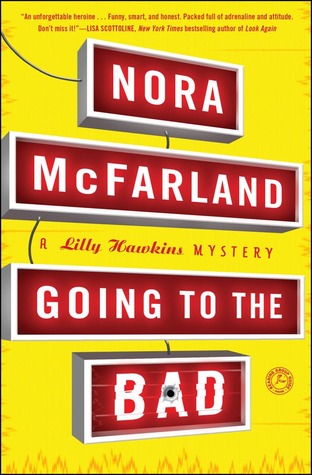