Four young men decided to take a bite out of the world. The world bit back. 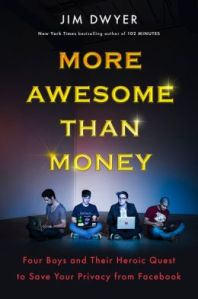 More Awesome Than Money: Four Boys and Their Heroic Quest to Save Your Privacy from Facebook by Jim Dwyer (Viking, $27.95, 374 pages)

This is a true story about four young men, from prosperous families (upper middle-class to one percenters), who decided to come up with a program that would take on and possibly destroy Facebook. Their creation, Diaspora, at one time seemed so promising that an intrigued Mark Zuckerberg sent them a donation of $1,000. What would set Diaspora apart from Facebook is the user’s ability to protect their personal information, keeping it from the clutches of advertisers. As the Los Angeles Times noted, the users of Facebook “are not the sites’ customers; they’re the merchandize. The real customers are the advertisers and aggregators who suck up the (personal) data on the users and use it to target commercial come-ons more effectively.” 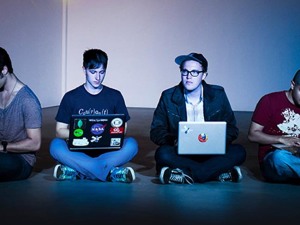 The efforts of the young Diaspora founders – who were in their late teens to early 20s – would fail largely because they had no business experience and made horrible decisions. For example, when they approached the Sand Hill Road venture capital firm, Kliener Perkins (KP), they were advised to not request a certain amount of money (KP was prepared to offer an investment of $750,000). They asked for $10 million and came away with nothing. This was close to, and eventually was, a fatal decision.

The stresses upon their effort were to lead to short and long-term dropouts among the leadership, and result in a suicide. This is, to a great extent, the story of Ilya Zhitomirsky, the brilliant self-taught programmer who suffered from depression. However, the telling incorporates the viewpoints of each of the founders. All of the founders suffered from inexperience and the sweet arrogance (and ignorance) of youth.

Dwyer, co-author of the excellent account of the destruction of the World Trade Center buildings, 102 Minutes, provides the reader with a cinematic story. This might make a fine film in the style of The Social Network, which detailed the founding of Facebook.

While engaging, this book suffers from a couple of flaws. The first is that multiple accounts of the same incidents result in sometimes-annoying repetition. This can lead the reader to feel like he/she is watching The Norman Conquests. Also, although Dwyer takes two stabs at wrapping up the story, in the final chapter and an epilogue, it comes to a sudden end – the book ends not with a bang but with a whimper.

If More Awesome Than Money is a true-to-life morality play, then Dwyer appears to be unsure of the lesson to be learned. Perhaps it’s that yesterday’s technological revolutionaries (Mark Zuckerberg, Bill Gates, Steve Jobs, Larry Ellison) became today’s establishment figures. They and their creations are to be attacked at one’s own risk.

A review copy was provided by the publisher. The original subtitle of this book, as listed in the inside pages, was Four Boys and Their Quest to Save the World from Facebook. I do not know why it was changed.

Note: While finishing this review, I happened to read that Mark Zuckerberg and his wife provided a donation of $75 million to San Francisco General Hospital. “Make of that what you will.” (A.C. Newman, “There Are Maybe Ten or Twelve…”)