The Other Wes Moore 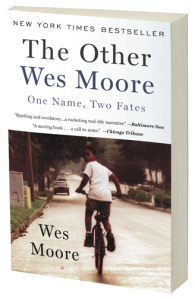 The Other Wes Moore: One Name, Two Fates by Wes Moore (Spiegel & Grau)

This uniquely titled nonfiction book was written by Wes Moore, the Rhodes Scholar, U.S. Army paratrooper and White House Fellow.   He is the successful Wes Moore.   His namesake from the same town on the east coast is serving a life sentence in the Jessup State Correctional Institution.   The crime was murder and there is no possibility of parole.

The author’s recent appearance on the Oprah Show gave this reviewer the opportunity to observe him in the spotlight.   He came off as poised, charming and amazingly confident.   I wondered if this was an act, perhaps a well-polished persona that wins friends and influences people?   There are plenty of hucksters who achieve fame.   The book would provide the answer.

Within the first couple of chapters it was obvious that Wes Moore is beautifully literate, yet without pretentiousness.   What you see is definitely what you get.   His unfaltering curiosity about the other Wes Moore has resulted in a book that explores the outcomes for both these men and how they arrived at adulthood.

The story revolves around two young men with all-too-familiar life circumstances that include being an African American male raised by a single parent living in a poor, or declining, urban neighborhood.   The narrative is set forth in three major phases concerning their coming of age.   The fellows and their life experiences are differentiated as the author uses the first person for himself and the third person for the other Wes Moore.

The story is filled with painful realities – it’s easy to fall into the gang life; defensiveness and alienation are part of each day; and escaping the neighborhood (Baltimore or the Bronx) requires courage, determination and sacrifice.   The author began his life with two parents raising him; however, due to a tragic medical condition his father died of a rare but treatable virus.   The other Wes Moore only met his father once, accidentally in passing.

Each man encountered challenges as well as opportunities.   The opportunities were provided by family and friends.   Always there is balance in the presentation of each man’s life including photographs that illustrate the text.   They both tried and failed more than once when attempting to change the course of their lives.   The difference in the outcome can be characterized by the expectations placed upon the author and his willingness to keep trying regardless of how hard the challenge might be.   He was also immensely fortunate to have family who were willing to make financial sacrifices to obtain some of the opportunities.

Wes Moore, the author, has included a comprehensive resource guide at the back of this book.   The nationwide listing features organizations focused on assisting youth.   Because this list is a point-in-time snapshot of resources, this reviewer was pleasantly surprised to see that a continually updated version is available on the internet.

A reader who is interested in learning more about success and how it can be achieved would be well served to read The Genius in All of Us by David Shenk.   Both books explore the impact of environment on personal success and the role hard work plays in achieving it.

The Other Wes Moore:  One Name, Two Fates will alert a reader to the possibilities for a better future for our youth, especially children who face undeniably tough circumstances.   Highly recommended.

The Other Wes Moore was released by Spiegel & Grau on April 27, 2010.   A review copy was provided by the publisher.