(I Can’t Get No) Satisfaction 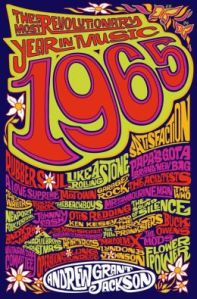 1965 could have been a direct, engaging and entertaining account of that year’s music. Instead, this nonfiction story begins with Acknowledgements, a Selected Time Line, an Introduction, and a Prologue before it actually starts. The ending is, naturally, followed by an Epilogue. And instead of simply discussing the music of the 12-month period, Andrew Grant Jackson proceeds to attempt to cover all of the political and social developments of the time, with far too much attention paid to psychedelic drugs. (Boring, “oft-covered” territory.)

One or two factual errors might be excusable, as Jackson was not alive when these events occurred. But there are far too many in 1965. Jackson writes that the Beatles tried to out-jingle-jangle the Byrds with the song “Nowhere Man.” No, it was George Harrison’s “If I Needed Someone.” He lists the Beatles’ “Think For Yourself” as a song about politics and free expression. No, it was a break-up song. He writes that the Lovin’ Spoonful’s “Daydream” was a remake of “Baby Love” by the Supremes. Not even close. And he cites “Sloop John B” by the Beach Boys as a drug song. It was a remake of a West Indies traditional folk song earlier recorded by the rather benign, innocent Kingston Trio.

There are other statements that are questionable. Jackson writes, for example, that the Rolling Stones based their single “Paint It Black” on “My World Is Empty Without You” by the Supremes. Maybe, maybe not. One of the highly doubtful statements made by Jackson is that Brian Wilson based his classic song “God Only Knows” on the lightweight song “You Didn’t Have To Be So Nice” by the Spoonful. C’mon, now.

1965 is also plagued with no small amount of repetition. Jackson often makes the claim that specific rock song introductions were based on Bach’s classical music. In a couple of instances, he is likely right, but he goes on to state that this is the case for a large number of songs. Again, this is questionable.

Every now and then Jackson does uncover something of interest. He may have discovered the song that Paul McCartney heard as a very young boy in the early 50s, which subconsciously inspired him to write “Yesterday.” Well, maybe.

One final point is that Jackson often attempts to connect one type of music to everything else, musically and otherwise. You can love the music that Frank Sinatra recorded in the 60s without tying it to what the Beatles, Bob Dylan or the Rolling Stones were doing at the time. There are different types of music, and some music is created without reference to the political struggles or happenings of the time.

1965 is a book that had a lot of potential. Due to its strangely formal structure and its errors, the potential was largely wasted.

A review copy was provided by the publisher. This book was released on February 3, 2015.

The Conundrum of Context

A question that one reviewer struggles with.

Here’s a question that I struggle with as a book reviewer, “Is it appropriate to make reference to other books when I review a new one?”   For the reasons I’ll explain here, my answer tends to be situational.

Let’s say that I’m reviewing the latest novel from author Joe Blow called A Kick in the Head.   If I think that this work from author Blow is the best thing he’s done – and it quite clearly calls for a highly positive review, I’m unlikely to reference any other works by Blow or other writers.   Why?   Because I’m explaining why I like or admire this release.   Many readers, and most especially Blow’s longtime followers, are happy to accept a positive review on its face.

But if Blow’s latest book blows (sorry, I couldn’t resist…), there’s a good chance that I’ll refer to either his earlier, better works, or to those of other authors writing in the same genre.   The reason for this is that I would expect to be challenged, either by a reader new to this author or by one of his loyal fans.   Generally, negative reviews require more information – more context, if you will – to set the stage for the reviewer’s not-so-pleasing conclusion.

What Blow’s fans are really asking of the negative reviewer is, “What makes you think you’re correct?”   Or, in plain English, “What’s your ammunition?”   So my first option – and often the best one – is to compare this new work to the author’s earlier ones.   Maybe the writer was clearly hungrier earlier, or fresher and this stance provides me with the basis to make the claim that his work is now sounding worn and tired.   Regardless of whether a fan of Blow’s buys my argument, I’m not too subtly making the point that I’ve also read all or most of his writings.   (It makes a difference to me personally if someone criticizing one of my favorite authors indicates that he/she has read all or most of his/her works.   I’ll give more weight to that criticism than to someone’s who notes that this is the first book they’ve read by an author I know and love.)

The next option is to compare Blow to his direct competition.   This can be preferable when time seems to have passed Blow by…  He may have been the best writer of his type back in the day (heck, he may even have created the genre in his youth) but this doesn’t give him a pass today.   There may be a dozen or so new and younger writers who have tailored Blow’s style into something that’s fresh and new on the runway.   But I’ll have to give some specific examples of how and where this is true, which is why I would likely include a comment like, “A Kick in the Head is not only not as engaging as Blow’s classic The Last Bus Home, it also seems dull compared to Judy Bling’s brilliant debut novel of 2010, Fighting Back.”   In instances where another author’s work is cited, I think it should be something current (written within the last year or two). 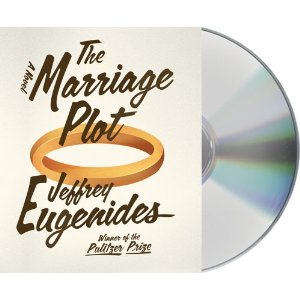 But there is another instance in which a positive review should include a reference to other writings.   This applies to cases in which the reviewer – I or someone else, attempts to make the case that a work by a new writer approaches greatness.   If  I’m going to argue that new author Judy Bling’s first book is stunning, I think I need to provide context by making comparisons to some well-known or accepted best writers.   Does she set scenes as effortlessly as Anne Lamott, or write with a cool and icy focus like Audrey Niffenegger?

If one’s going to argue that a new writer approaches greatness, then I think one had better be willing to specifically compare that writer to other exemplary writers, past or present.   (Not everyone’s going to agree with the validity of the comparative selections, but that’s beside the point.   They don’t have to concur with the review either.)

Now let’s all hope that Joe Blow’s next book is better than A Kick in the Head!

Pictured:   The Marriage Plot: A Novel by Jeffrey Eugenides, which will be released by Farrar, Straus and Giroux on October 11, 2011.