Papa Was A Rollin’ Stone

“I wish I had died before I ever loved anyone but her.”   Hemingway, A Moveable Feast

Paula McLain presents a convincing rendition of the unique but enduring relationship between Ernest Hemingway and his first wife, the conscientious and serene Hadley Richardson, in her first novel The Paris Wife.

After a brief and long distance relationship, the confident young twenty-year-old Ernest proposes to Hadley, a conservative spinster in her late twenties.   On the quest for the ideal inspirational setting in which to write, McLain’s story takes us to the art scene in Paris in the 1920s as the aspiring artists – on the brink of greatness – share their hopes and dreams in local cafes.   McLain’s story is so detailed and believable that you can enjoy teaming up with individuals as they meet their fellow artists and enjoy team with individuals such as Gertrude Stein.   Her character Hadley happens to recall a conversation that she and Ernest had while sharing drinks with F. Scott Fitzgerald as he announced his hopes for the success of his then-recently written novel The Great Gatsby.

The reader will understand why Ernest was so inspired during the couple’s trips to Europe, especially while watching the bullfights in Pamplona.   The reader will also sympathize with Hadley, the ever-loyal wife who strives to maintain the attention of her husband, standing by his side through circumstances that even the strongest of us would run from.   The depth of the conversations and the personalities of the characters come alive in McLain’s dialogues and Hadley’s interpretations of the relationships that develop during this phase of Ernest’s life (including his union with his second wife).

McLain does a remarkable job of defining all her characters and in describing the landscapes and cultures of the couple’s travels.   You will become so entranced with her story you will no doubt forget that you’re not actually reading Hadley’s autobiography. 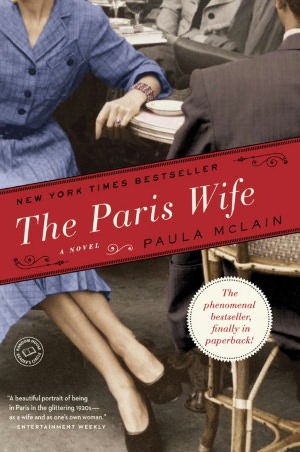 The story left me with a desire to rediscover Hemmingway by rereading A Moveable Feast and The Sun Also Rises.   I know that I look forward to my next trip to Paris where, while sitting at some of the same cafes once visited by the Hemmingways, I will try to imagine what it was like for this young couple in the local art scene during the Roaring Twenties.   I will also contemplate what Ernest Hemmingway’s life may have been like if he had remained with his first love, Hadley.

A review copy was provided by the publisher.   The Paris Wife was released in a trade paperback version on November 27, 2012.