If you’re looking for something quite different, this is it.   Oxygen by Carol Cassella is an interesting medical-legal tale told from the perspective of a practicing anesthesiologist.   In this story, Dr. Marie Heaton is the anesthesiologist who tells the mother of a young girl going into surgery, “I’m going to keep her very safe for you.”   Then the child dies on the operating table mid-procedure.

The death begins the unraveling of the doctor’s life professionally and emotionally, as she faces a civil suit and perhaps even criminal sanctions.   Cassella (an English literature major at Duke before completing medical school) is excellent at creating tension to the point where lights seem to dim as you move further along in this living nightmare.

The reader relates fully with Dr. Heaton because she’s apparently made no major mistakes (she may have cut one minor corner) yet faces horrendous consequences because a child is dead.   Dr. Heaton also begins to see that the friends and colleagues who’ve pledged to stand beside her begin to drop away.   At the end, she may have only her Texas-based family members to rely upon; and faint hopes of a miraculous exoneration.

I will not say any more about the plot except to note that it is set in Seattle, a place Cassella brings to life whether or not you’ve visited Pike Place Market.   Ironically, Dr. Horton and her fellow doctors have moved to Seattle for its scenery, which they rarely see due to 14-hour workdays.

For a first-time novelist, Cassella’s style is smooth and easy:  “The freeway dumps us into a nest of prewar bungalows huddling below the glass and metal giants of downtown (Houston).   The houses are painted in the vivid Easter egg yellows and blues and lavenders my mother always associated with the Mexican barrios that percolate up through the soul of all Texas cities like boiling springs, their mariachis…  and Spanish seared into our cultural palate.”

I have just two reservations about the telling of this story.   The first is that life becomes such a harsh struggle so quickly for the main character that some may find it too depressing to hold their interest.   Second, the Seattle hospital that Dr. Heaton works at never seemed real…   Those who know hospitals may find that something seems to be missing.

Despite these two points, I’m glad I read this one-of-a-kind novel.   I’m a fan of stories where the ending has not been revealed fifty, seventy-five or one hundred pages before it arrives…   This one also comes with a bit of an epilogue which is a pleasant surprise. 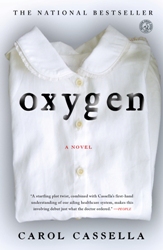