Simple is not only a really well-crafted police procedural mystery; it is also the story of a mother’s love and her son’s gentle nature. Cal, who has been a victim all his life, is accused of the brutal murder of Cassie, a newly-minted attorney who has bought a house in a less-than-desirable part of Pittsburgh, Pennsylvania. Cal seems to be more than a bit simple; however, considering the battering he endured over the years by bullies, he is remarkably able to quietly work as a handyman on neighborhood homes including Cassie’s.

There are times when she studies the shoes and hair and clothing of the people who come to the Connolly house and tries to figure out what about these things costs so much money. The black dresses she will see tonight, the sundresses, the sandals with decorative knots or jewels, cost a month’s salary. But she’s not always sure these things are pretty, that’s what bothers her.

Elinor, a woman with mixed racial blood, works for a wealthy man with high political ambitions. She diligently runs the Connolly household year in and year out, first for the senior Mr. Connolly and then for his son. Her son Cal, who has passed for white all his life, is the center of her world. She has unwavering love for him even when he is considered the prime suspect in Cassie’s murder.

Cal’s being a victim may seem like a sure segue to anger and violence. Main police characters, Detective Colleen Greer and Commander Richard Christie are willing to look past the obvious and consider alternative scenarios. The racial issues that are a considerable factor in this tale are particularly relevant with 2012 having been an election year. The aspects in this tale are about mixed race folks (like President Obama) rather than black vs. white tension. There are strong contrasts presented in Simple and relationships aren’t what they appear to be on first glimpse.

Author Kathleen George peels back the twisted layers of her story to reveal an undercurrent that is full of evil. Her book is sort of like a John Grisham work, but not really. It has more of an old-fashioned Dragnet approach, not so dramatic, rather, simple.

How shallow life is, that because nature handed her physical beauty, she should have such power.

A review copy was provided by the publisher. “If anyone’s writing better police thrillers than George, (we) don’t know who it is.” Entertainment Weekly

A review of Simple: A Mystery by Kathleen George.

Hold On Hold Out

“But to live outside the law,  you must be honest…”   Bob Dylan, “Absolutely Sweet Marie”

In Kathleen George’s Hideout two hooligan brothers, Ryan and Jack Rutter, become entangled in a late night hit and run accident in Pittsburgh that results in the death of the victim.   Both have a tendency to abuse virtually any chemical substance ever invented, though throughout the story the younger brother Jack is portrayed as having some redeeming qualities and a semblance of conscience.   The same cannot be said for Ryan.

Colleen Greer is the detective most involved in the search for justice.   At the beginning of the story, George attempts to create some depth in her that would bring a measure of human interest to the whodunit, but mostly falls short.   That’s the real problem with this book.   It can’t decide if it wants to be a story that grabs the reader because the character interests them; or if it simply wants to be your basic copy thriller.   For this reason, it falls short on both counts.

The action of the story spans the time from Saturday evening to Thursday of the following week.   As the brothers flee, they continue to commit various crimes from robbery to what might be construed as attempted murder.   Make no mistake about it, these two are stupid.   The most surprising part of the story just might be that it takes the police over five days to catch them.

The author attempts an interesting twist when the brothers are separated for the first time, but, they soon reunite.   The story continues on as they discover that the authorities are on to them.   They must try to find a way to avoid capture with less money and less of a plan.   In the end, Jack enjoys some compassion upon his capture, but the resolution as to what that might mean for his future is not explored.   (It seems that including this element at the closing of the book serves little purpose.)

Fans of the genre will probably enjoy this book the same as others, but the general reader might give something else a try.

A review copy was provided by the publisher.   Hideout is also available as a Kindle Edition and Nook Book download.   Kathleen George’s latest novel is Simple.

Dave Moyer is the author of Life and Life Only: A Novel, and is a public school administrator in the Midwest.

“When a man who demands his own way in all things is faced with the disastrous consequences of his actions, he has to know what brought them on.   But can a man’s mind bear up under such knowledge?”

Prolific author Stephen Gallagher has carefully crafted a period piece set in 1912-era London.   The refined language and specificity of details draw the reader into the tale.   At first it seems a bit forced; however, as the drama/mystery unfolds, the reader becomes familiar with the main character, Mr. Simon Becker, a Brit who is a former Pinkerton Detective in Philadelphia, Pennsylvania.   Becker is now in England with his wife Elizabeth, son Robert and sister-in-law Frances living under reduced circumstances.   Their relocation was precipitated by a need of proper guidance and schooling for son Robert, who has been variously described as mentally deficient and/or brilliant.

Although poor, the family is comfortably settled in a set of rooms in the Southwest borough of London.   Nearby are dreadful slums, yet Becker and the rest of the family count themselves fortunate to have created a home that suits their needs.   Elizabeth works as a nurse’s aide at a local hospital, Becker is employed by the Master of Lunacy in a poorly paying position, Robert attends classes at a special school, and Frances manages the household.

In his capacity as the Lord Chancellor’s Visitor in Lunacy, Becker travels to interview wealthy persons who may have become too addled or just plain insane to manage their own finances.   Becker is on such a visit to wealthy and titled industrialist, Sir Owain Lancaster, when all hell breaks loose in the small town near the industrialist’s large estate.   Two little girls are found dead with evidence of mauling and “interference.”   In the terminology of the era, this means they were sexually assaulted.   This is but one of a series of gory happenings in the town going back many years.   Becker gives in to his urge to investigate, a holdover from his Pinkerton days.

Sir Owain is a brilliant inventor whose life took a horrible turn for the worse during an expedition into the Amazon region of South America.   Gallagher does a brilliant job of unfolding his character’s quirks and motivations.   Becker and Sir Owain enter into a battle of wits as Becker tries to determine whether Sir Owain is a candidate for placement in protective custody by the Master of Lunacy – Becker’s employer.

What sets the book apart from other similar English period pieces is the wildly creative imagination of author Stephen Gallagher.   After setting the stage for the mystery, Gallagher forges ahead with his tale and as Bette Davis famously stated in All About Eve, “Fasten your seatbelts, it’s going to be a bumpy night.”   Yes, it was a page-turner that kept my attention to the very end.

It makes perfect sense that Gallagher is able to bring a story to life so vividly as he is a screenwriter, director and novelist!

A review copy was provided by the publisher.   The Bedlam Detective was released on February 7, 2012.

“If thriller reading were a sin, Stephen Gallagher would by responsible for my eternal damnation.”   Dean R. Koontz 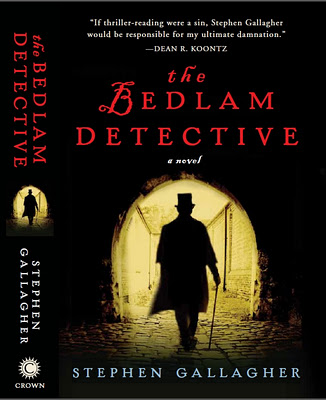 “Somebody out there has turned a gun on two kids.   Whoever did it might be locked up now, and they might not.   If they weren’t locked up, then they were on the street and not far away.   It wasn’t six degrees out here, separating the guilty from the innocent, the living from the dead.   It was two degrees.”

This would have made for a great two-hour made for TV movie – a decade or two or more ago – when people felt they still had the time to watch such things.   Two outstanding males of high school age are shot (and one is killed) in front of  a drug house in Philadelphia, a killing which has shocked the community and the entire city.   The old guard police chief wants the crime solved by yesterday, so he turns to his most on-the-make young detective; a kid with a proven track record (the department’s “boy wonder”), and the best of instincts.

But there are two other individuals who have their own reasons for beating the detective at his own game.   One is the police officer father of the surviving high school students, who feels guilty over his shaming of a son who he viewed as less than masculine.   Then there’s the officer’s troubled and drug-abusing half-brother who sees this as his chance for redemption within the family.

As these protagonists engage in a race to solve the crime in a dangerous environment, things quickly become far more dangerous.   Control of the drug trade in this community already changed hands once in the recent past, and now there’s a full-fledged war to see which adult gang will control the multi-million dollar trade in the future.   This is a war fought with automatic weapons and snipers; a war in which friends betray friends.   The winners will be able to buy anything they want in life, the losers will be dead.

“The city was a box between the two rivers, a couple of miles up and down.   Chances were he really did already know the shooters.   And that they knew him.”

Our fourth major character is the city of Philadelphia, Philly, which is anything but inspiring or glamorous.   This is the tough and downtrodden city seen in the film Invincible, in which most folks are out of work and one’s leisure time is spent in dive bars and strip clubs.   The only job training program available is run by the drug dealers who own “the corners”, and it’s a program that is far from being sanctioned by the federal government.

“He thought about how everyone thought they had the right to do whatever they did.   Everything, no matter what.”

Author Dennis Tafoya does not easily or readily give up information to the reader, which in this context is a good thing.   The reader will be almost two-thirds of the way through the story before learning the simple reason the two young men were standing in front of a drug house on a dangerous night.   Tafoya makes you work for it, to become invested in his tough and gritty story.   It is an investment that pays off extremely well in the end.