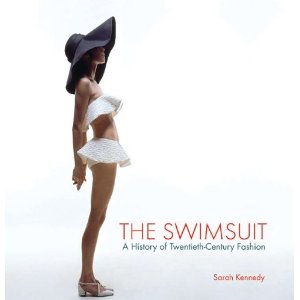 The Swimsuit: A History of Twentieth-Century Fashion by Sarah Kennedy (Carlton Books; $34.95; 304 pages)

This is a serious survey of the evolution of the ladies’ swimsuit in the 20th century.   The text offers a chronology of the garments worn by bathers, accompanied by countless illustrations and photographs.   Don’t let the fancy layout and gorgeous swimsuit models in the modern era suits fool you.   There’s a strong correlation between the social and political achievements during the last century and the freedoms we now enjoy.

Innovations in fabric production have allowed designers to create remarkably colorful and daring shapes that stand up to water and sunshine.   In the past, there were several concepts that seemed like good ideas but failed miserably when put to use.   The rubber suit was one of them.   It seems that it was only good for a couple of swims before it crumbled – not exactly a pretty picture!

Author Sarah Kennedy traces the various manufacturers and designers whose work stands out and has survived the whims of fashion.   She has brought together resources from England and the United States.   There is a comprehensive list of designers and manufacturers as well.   This book would make an excellent present for the swimsuit fashionista on your holiday gift list.

Take Away:  Women will enjoy reviewing this clever look at the female liberation movement, from an on-the-beach perspective.   But don’t be surprised if the males in the household (ages 15 to 80) are caught using it for scientific research purposes!

Clarissa Gets Her Wings

How Clarissa Burden Learned to Fly by Connie May Fowler

“Life is too short, the ghost knew, for a woman to waste it on a man who did not know how to love.” 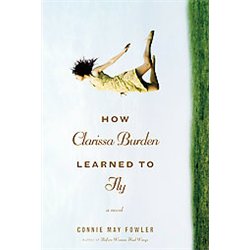 This is a very entertaining novel about personal liberation.   Our protagonist is the interestingly named Clarissa Burden, a novelist who is burdened by being married to “an amoral and dangerous man.”   Clarissa lives in an ancient home in south Florida that’s also inhabited by a family of ghosts (ghosts being the biggest trend in current fiction behind vampires) and thinking animals and insects.   Fowler makes quite clear that this story of one woman gaining freedom is meant to be symbolic of something far larger:  “Hers was not so much a private, primal scream as it was a release of all the vicissitudes that all women through all time had ever experienced.   Subservience wasn’t their game.”

This serio-comic novel is uplifting while also being quite a fun read.   Not only do we have human ghosts, we also have a ghost fly that’s in love with Clarissa – the woman who killed him – and we have circus dwarfs, mistakenly referred to by Clarissa as midgets.   As with Audrey Niffenegger, Fowler saves some of her best writing for the descriptions of the ghost of Olga Villada, the first owner of the home she lives in:  “Olga spun toward the middle of the room…  She began to whirl, faster and faster…”   Clarissa stood “in the shadow of a whirling ghost.”

Clarissa’s ancient home is “full of haunts” but this is less disturbing to her than her husband’s lusting after other women (primarily young ones) and her difficulty in resuming her previously successful writing career.   She no longer experiences “the same feeling she experienced in the old days when she was writing and writing well, when she knew the next word she typed would be not simply an okay word or a good word, but the only word in all the English language that would do.”

Clarissa leads a frustrated life of writer’s block and blocked emotions until she meets a young male writer, a prior acquaintance, who shows her the path to freedom.   However, don’t fear as this tale never gets too serious or too preachy…   In fact, it concludes with a hilarious shaggy-dog story-type ending involving the dwarfs’ circus and an adventurous dog that will make a perfect ending for a film version.

Reading How Clarissa Burden Learned to Fly is like taking a nice cooling shower on a hot and muggy day in southern Florida.   Refreshing!

Reprinted courtesy of the New York Journal of Books.