Someone once wrote: “We fear death the way children fear going into the dark.”   Meghan O’Rourke

There’ll come a time when all your hopes are fading/ When things that seemed so very plain/ Became an awful pain/ Searching for the truth among the lying/ And answered when you’ve learned the art of dying…   But you’re still with me.   George Harrison (“The Art of Dying”)

Meghan O’Rourke has presented us with a serious, somber and thoughtful memoir about the grief she suffered when her mother died at the age of fifty-five.   Although her mother’s age is noted, one has the impression that she would have felt the same burden if her mother had lived to be 100, as O’Rourke was simply unprepared to live in a world without its (to her) most important resident.   As she states so well:  “One of the grubby truths about a loss is that you don’t just mourn the dead person, you mourn the person you got to be when the lost one was alive…  One night (my brother) Liam said to me, as we were driving home from my dad’s to Brooklyn, ‘I am not as sad as I was, but the thing is, it’s just less fun and good without her.'”

In order to deal with her pain, O’Rourke conducted a personal study of death, the standard fear of it, religious beliefs and traditions surrounding it, and the vast amount of research that has been done on the human grieving process.   She even touches upon grief in animal colonies.   One discovery she made in the process is that Elizabeth Kubler-Ross’ work on the stages of grief has been grossly misinterpreted.   These were not intended to be the stages that mourners – those left alive – go through; they were intended to represent the stages that the chronically ill pass through.

O’Rourke is at her best when she discusses her own fears with us.   She has been afraid, since childhood, of the notion of death but it remained an abstract, if frightening, notion up until her mom’s passing.   Then her grief became all-encompassing and something she could not put aside in order to lead a “normal” life.   Grief, in a sense, made her insane for a period of time but it also taught her some very valuable  lessons – the chief among them being that one has to focus on death in order to truly appreciate life.   As her father told her many months after his wife’s death, he had always focused on what he didn’t have; now he had learned to look at what he did have in the world and in the universe.

After a loss you have to learn to believe the dead one is dead.   It doesn’t come naturally.

There’s a sense of accepting humbleness that permeates O’Rourke’s account – although she was raised a Catholic, she refers numerous times to Buddhism.   If there’s a weakness in the telling, it’s a factor that naturally affects most memoirs, a tendency to make one’s own life sound more important than that of the others that share the planet with the writer.   And, like Julie Metz in Perfection, O’Rourke tends to tell us more than we actually want to know about her social (meaning sexual) life.

At one point, O’Rourke comes off as strangely naive in regard to social relationships.   At the time that her mother died (it’s Christmas), an old boyfriend – whom she once dropped without explanation – comes back into her life, and O’Rourke wonders why, “…he always seemed to be holding back – why, I did not know.”   The reader wants to scream back at her, “Because you dumped him when you went away to college!”   (The ex was simply acting like a normal, scarred, self-protective human being.)

But these are minor points, because O’Rourke succeeds quite well in making us examine death as something both macro and micro; as something that must be fully understood before we can make realistic choices about what is most important in our lives.   In her almost philosophical approach to examining death and dying, she has written not only a monumental love story for the person who has gone missing in her life, she has also placed death in its natural and proper context.

(I think I wanted to grow up to be my mother, and it was confusing to me that she already was her.)

This is, in the end, a work about acceptance – the good with the bad – survival with death, the sudden eclipse of a life and eternal love.   O’Rourke masterfully teaches us about the art of dying, a matter for both hearts and heads (minds).

A review copy was received from the publisher.   “She is gone, and I will be, too, one day…  all the while my brain will be preoccupied by the question of death.   And that makes it hard, at times, to pay my bills…” 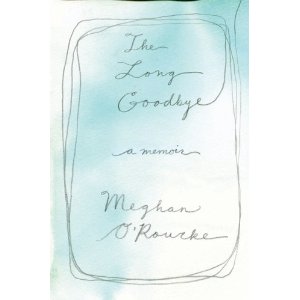 Comments Off on Of Missing Persons