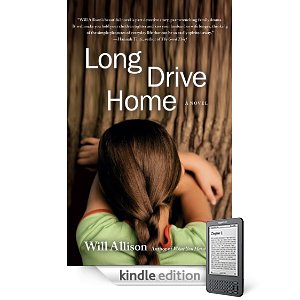 To be honest, each of us has read stories that we just don’t “get,” and this was the case for me with this short novel.   Long Drive Home is actually a novella, literally a small book that just exceeds 200 pages.   Even then it felt long, as there was never any tension surrounding the unusual plot.

Here’s a brief synopsis:  Glen is an accountant who lives in New Jersey with his wife and six-year-old daughter, Sara.   The fact that he’s an accountant is supposed to bring home the point that he’s a staid, conservative introvert.   One day, he’s driving Sara home when he almost becomes involved in an accident – it creates some surprising road rage in our otherwise calm protagonist.   So he drives a few blocks more until he’s on the street where he lives…   Guess what happens?   A young driver is speeding down his street and Glen – whose adrenaline is still flowing – decides to pretend to make a left turn in front of this teenage driver…   Guess what happens?   Even though it’s a feint (Glen doesn’t actually block the street), the young man flies off of the road, and crashes into an ancient tree – he’s dead before Glen can park his own car.

This incident, around which the entire tale revolves, never felt real.   We’re told that Glen made the left turn feint, then after the young man’s auto passed by, he turned into his driveway but overshot it due to his excitement.   Now, really, who would turn into his driveway after a car has just sped past and crashed?   If anything, the driver would stop in the street and then run towards the crashed vehicle.   But then several things didn’t add up here…

One troubling fact is that Glen is white and the reader comes to learn that the young man who’s killed is African-American.   Why throw in this racial aspect, when there’s nothing else in the telling that’s pertinent to race?   Supposedly, we’re informed that the dead young man is black because it means that the local police are less likely to investigate the case as a crime.   The cops will presume that the young man had alcohol or drugs in his system (and, luckily for Glen, he did) and caused his own demise through his recklessness.

“I was the only obvious defendant…”

According to another source “…wondering whether Glen will be arrested is what keeps you turning the pages.”   And we’re thrown a curve because in the village where Glen lives, it will take 4 to 6 months to get the autopsy results back on the dead youth.   OK, but, in fact, there’s never any tension in the story.   Why?   Because as far as the reader knows, there were no witnesses to the accident – no neighbors who happened to look out of the front window at the sound of a speeding car in a very quiet neighborhood.   If there are no witnesses, it will only be Glen’s word against that of…   Well, no one.

For a responsible citizen, Glen begins to act out in strange ways.   He lies to the investigative detective (who is naturally suspicious of the implausible events), keeps the detective from talking to Sara (see, she’s the only eyewitness), and goes on to find, stalk and fight with the driver who first got him upset on that fateful day.   Although that man is much bigger and tougher than Glen, our now strangely-acting accountant elects to  take him on.

It’s all quite bizarre, including the fact that with no crime and no eyewitnesses – and no intent on Glen’s part to commit a felony – it’s supposed to take not just several months but years before the police close the investigation and let our formerly staid protagonist off the hook.   If only author Allison had written in an eyewitness – say, a retired neighbor woman who observed exactly what Glen did or didn’t do prior to the strange accident – then turning the pages might have been justified.   Sadly, it was not to be and this novella winds up being a wreck in itself.

Take away:   It’s odd to have an investigative mystery in which there’s no crime and no witnesses to the incident in question.   Perhaps if protagonist Glen had been involved in a front-end collision with the young man who died, and then fled the scene and hid his vehicle from the authorities (actions of a guilty man), there would have been some actual tension in the telling.   There’s no such tension in this story of an innocent man.

You’ve Got Your Troubles

“It was as if Gloria was sabotaging herself, Sam thought.   Well, they were both sabotaging themselves, just going about it from opposite directions.”

Debra Ginsberg has populated her latest novel with a score of self-sabotaging and dysfunctional characters.   This is the story of Diana, a young pregnant woman who is thrown out of her mother’s home and forced to live with the father she’s never known.   Dad Joe lives in the suburbs of San Diego near the ocean with his second wife, Allison.   Joe made Allison abort her only pregnancy years earlier, and Allison knows nothing about the existence of Diana.   Therefore, when she appears on Joe’s driveway the marriage is suddenly in serious trouble.

But it turns out that everyone in the neighborhood is in trouble as the fires of late October and early November 2007 approach.   Fourteen people died and at least 70 were injured when a half-million acres burned.   One million San Diego County residents were evacuated, the largest evacuation in California history.   This is the not-so-pleasant back-drop for Ginsberg’s troubled tale.

It appears that all of the neighbors in Joe’s suburban community have their serious quirks and troubles.   There’s a sometimes-happy and sometimes-bickering lesbian couple, Sam and Gloria, and a heterosexual married couple, the Werners, whose son Kevin is a lazy weed smoker with no intellectual or athletic skills.   This is a ‘hood that is seemingly over-populated with drug users and abusers.   One has to wonder how accurate a reflection this is of America’s Finest City and its residents.

The one exception to the group of losers is an Asian couple, whose quiet son shoots hoops and practices the piano for hours on end.   This is a stereotype of sorts, although it’s one that was likely not meant to be offensive.   However, Ginsberg includes a highly troubling reference to Diana, who happens to be half African-American.   Early on, Kevin’s mother refers to Diana as “an uppity pregnant girl who had no business even being in the neighborhood in the first place.”   This is offensive on two counts – first, in using a term that is knowingly offensive to African-Americans, and also in the implication that there’s a “place” within which people of a certain color are not welcome.

Perhaps Ginsberg intended this non-P.C. reference to serve as a reminder of the destructiveness of racism, but she could and should have adopted a more subtle and temperate way of expressing that notion.   Another flaw with the telling is that Ginsberg chooses the rather unfortunate name of Joe Montana for Diana’s father, which makes it seem like some kind of inside joke.   “Joe Montana, like the football player?”   Yes.

One of the key problems with Neighbors is that the story is made needlessly complex.   When Diana surfaces with disastrous consequences for her father’s and stepmother’s marriage, the storyline seems logical.   But then Ginsberg takes it further – Joe suddenly has an affair with a young neighbor and Diana hooks up with Kevin, the worst possible choice for her.   More is not always better.

There’s this dividing line…  A dividing line between the fictional account which feels to a reader like real life, and the feeling that it’s a good effort but there’s a sense of magic that’s lacking.   Ginsberg produced a fine attempt in this novel but it struck this reader as a manuscript rather than as a fully developed work.   It needed some editing, trimming and rethinking.   All in all, the author seemed to be sabotaging herself like the characters in her dysfunctional fictional neighborhood.