A review of Who is that Man?: In Search of the Real Bob Dylan by David Dalton.

He didn’t really know where he was going and he didn’t care much.   He just liked the feeling of freedom, walking alone in a strange town on a day when nobody…  was likely to meet him or greet him.   He could go “invisible,” a word and an idea he relished.   Since the age of twenty-three he could not go anywhere where he was not recognized.

Bob Dylan has said (and it’s repeated in this work) that he has only read the first of the many books written about his life.   That’s because after he read the first bio of Robert (Bobby) Zimmerman, he felt like it was all fiction – it did not seem like he was reading about his own life.   To some extent, I share the feeling after reading this huge tome on Dylan’s professional life in music.

When I read Dylan’s own Chronicles I felt like I had engaged with the man…  His all-too-unique voice came through so clearly and he seemed intelligent, clever and likeable all at once.   But after reading The Ballad of Bob Dylan, I felt as if the man, the musician, had suddenly become invisible again.   “You’re invisible, you’ve got no secrets to conceal…”   (“Like A Rolling Stone”)

The role of the modern biography should be to transform a legendary human being, living or dead, into flesh and blood.   When I read the equally long (480 page) biography of the boxer Sugar Ray Robinson, Sweet Thunder: The Life and Times of Sugar Ray Robinson by Wil Haygood, I felt as if I’d spent days in the presence of an athlete that I’d never met.   More importantly, I felt sorrow when I finished the true tale as I knew that I would begin missing the feeling of being in the presence of the late Sugar Ray’s bittersweet personality.

As a research document, The Ballad of Bob Dylan is fine.   It adds to the historical record giving the reader citations as to the inspirations for Dylan’s songs (religious, personal and otherwise), and telling us – sometimes for the first time – about his interactions with other musicians.   But the read is simply flat, very much like reading a college textbook.   For me, many interesting facts got lost in the presence of too many uninteresting facts.   And looking at the singer-songwriter’s life by reporting on a select number of performances that were separated by decades just seemed too clever to me – the game was not worth the candle, as the law professors say.

If you’re a Dylan fanatic, then you will no doubt purchase and read this biography no matter what any review states; and there are two other new Bob Dylan biographies that you’ll need to buy at the same time.   But if you’re just curious about the man who is about to turn 70 (and maybe new to the whole Dylan craze), I would humbly suggest that you instead purchase the trade paperback copy of Bob’s own Chronicles: Volume One.   You might also ask one of your older relatives to lend you their vinyl or digital copies of Subterranean Homesick Blues, Highway 61 Revisited (“The album that changed everything!”  Rolling Stone), Blonde on Blonde and Blood on the Tracks.   In this way, you’ll come to know both the man and the musician at his oh-so-fine, once upon a time, peak. 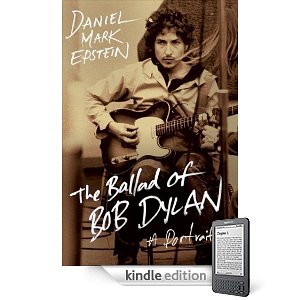 Chronicles: Volume One by Bob Dylan is available from Simon and Schuster Paperbacks ($14.00; 293 pages).   Sweet Thunder: The  Life and Times of Sugar Ray Robinson by Wil Haygood is available in trade paperback form from Lawrence Hill Books ($18.95).

“The best is always fragile, Sugar Ray Robinson once said, and it took a writer of Wil Haygood’s magnificence to appreciate what this meant in bringing the great boxer back to life.   Sweet Thunder is a jewel from beginning to end.”   David Maraniss, author of When Pride Still Mattered and They Marched Into Sunlight: War and Peace, Vietnam and America, October 1967.

Slight Return:  I made this note to myself while reading The Ballad of Bob Dylan, “This book is like a brief for a lifetime achievement award.   It did not help me to understand who the man is.”