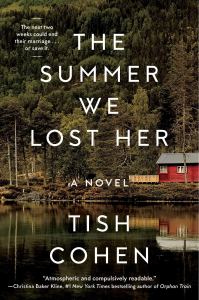 Tish Cohen has knocked it out of the park with The Summer We Lost Her.

An aspiring Olympian and dreamer, Elise – who gets “oh, so close” to her dream after years of dedications and near misses – is confronted with the brutal realities of her future and past. She has decisions to make. Especially in light of the birth of her daughter, Gracie.

Elise’s lawyer husband, Matt – the dutiful father and conventionalist, must also reconcile his vision of reality and the myths that catch up with him regarding his past, and the grandfather he loves. When confronted with the presence of his first love, Cass, and the psychological connections of his past, he has decisions to make.

In Summer, Gracie disappears at a lake community in northern New York state. There is no greater evil than this, and there is no greater reckoning than what transpires in the face of such an event. And a reckoning there is. But as the story unfolds the humanity of the characters is revealed in such an understated way, it is hard to root for or against anyone. And so what hangs in the balance until the final pages of the story is totally satisfying.

The couple wrestles with the decision to sell their property near Lake Placid, New York, amidst the loss of their daughter. They must also deal with Elise’s quest for excellence, the appearance of Matt’s first love, revelations of Matt’s grandfather’s questionable practices, and the reappearance of Elise’s mercurial father.

It is no surprise that the rights to the tale have already been claimed for a TV mini-series. 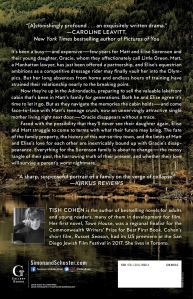 The ending could go in multiple directions. Part of me says Cohen should have written a Great Expectations, with two different endings and let the reader decide. But, short of that, it is hard to find fault with this extremely satisfying novel.

This novel was released on June 4, 2019. A review copy was received from the publisher.

Dave Moyer is a public school superintendent in Illinois, and is the author of Life and Life Only: A Novel about baseball, Bob Dylan, and love.

Advance praise for The Summer We Lost Her (click on the image to see a larger version): 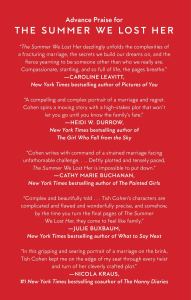