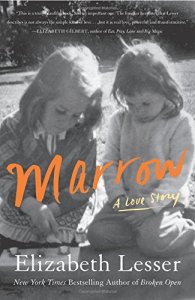 In this extraordinary – at times harrowing – memoir we see the Lesser family deal with the impending death of Maggie, the high-spirited hummingbird in the family. Maggie needs a bone marrow transplant and her older sister Liz is the perfect match. The other two sisters remain outliers (not by choice), intensifying the family conflict.

Intense, raw, and brutally honest, Liz and Maggie are forced to communicate in a way that had eluded them growing up. Things unsaid were embedded in the family’s core and, through acts of bravery, the “wounded healing” begins.

While “marrow” refers to the painful transplant Liz undergoes in an attempt to save Maggie’s life, “marrow” is more frequently and powerfully used as a metaphor for the core of the sisters’ relationship — where the “stem cells of life” originate and the sisters’ assumptions about each other are often distortions and lies. Each sister tells a different story of her childhood, viewing the family dynamics though a different lens.

“We will dig for our goodness and harvest the marrow of ourselves for each other…” the two sisters promise each other as they consent to therapy and spiritual approaches to death and dying. The author mingles Buddhist meditation, philosophy and literary allusions sometimes successfully (and sometimes not) in seeking meaning not only for Maggie’s premature and terminal illness but also for human connection. At the end there is only the feeling of being “helpless with love” and a lesson for us all in facing the death of loved ones – and our own death.

Marrow is a deeply affecting trigger to the heart about love, family and learning to let go. This memoir is for those who can face a narrative about trauma in life without getting depressed or angry. I highly recommend it!

A review copy was provided by the publisher. This book was published on September 20, 2016.

Diana Y. Paul, a retired Stanford professor, is the author of three books on Buddhism and Things Unsaid: A Novel (She Writes Press). You can read her reviews of films and art at: http://www.unhealedwound.com/. 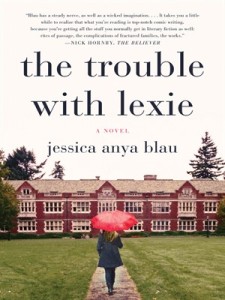 We are launched into Lexie’s suddenly unhinged life at a scandalous moment, as she is discovered in the worst possible condition, in the most unthinkable place at precisely the wrong time. This contemporary, hilarious fourth novel from Jessica Anya Blau is addicting and fast-paced. After the ignominious opening scene, the story jumps back in time, where we learn Lexie’s history through artfully constructed scenes.

Lexie James is an alluring 33-year-old Health and Human Sexuality teacher at a prestigious U.S. private boarding school on the east coast. She has made something of herself, coming from a working class single mom and absentee father in California, to now being employed by the Ruxton Academy and engaged to marry a refined man. We admire her, all the while knowing that a train wreck of poor choices awaits.

Suspense builds. There are massive deceptions, forbidden fruits, and vivid characters, such as the ancient, potty-mouthed Dot. The metaphors are brilliant (“Lexie felt the pain so intensely she could almost see it as a physical thing: a vibrating sheet of silvery magneta that clanged against her cold skin like cold aluminum.”), the philosophy sweetly dispensed (“Yes. Love the people you love, be open to love, be good and do good.”), the similes memorable (“The sadness inside Lexie ran like a wash cycle: circling, swirling, rotating, swishing. It came straight out of her mouth, eyes, and nose, everything wet and running.”) and the wisdom simply put (“Maybe anxiety showed up only when your body needed to tell you something you hadn’t yet faced.”). The outcome proves Dot’s cautionary advice to Lexie: “…remember that the only life worth living is the one where there’s been numerous f*ckups.”

Jennifer Dwight is the author of The Tolling of Mercedes Bell: A Novel (She Writes Press).

As majestic bells of bolts struck shadows in the sounds/Seeming to be the chimes of freedom flashing… Bob Dylan, “Chimes of Freedom”

In Jennifer Dwight’s The Tolling of Mercedes Bell, Mercedes Bell, a recently widowed mother of a teenage daughter, is down to her last out when fortune steps in and she obtains a job as a paralegal at the law firm of Crenshaw, Slayne and McDonough.

The bright, engaging newcomer enjoys some early success and things appear to be turning around for her when attorney Jack Soutane begins renting space at the firm. The two become an item and the future begins to look ever brighter. But, as is often the case, if things seem too good to be true, they often are.

Due to Jack’s somewhat shady reputation others are skeptical, but the trusting Mercedes opens up her heart and lets him in. He is a charmer but, soon, little things become big things; as the story shifts into another gear, not even the great Jack Soutane can maintain the level of deceit necessary to cover up his past and escape the present.

The reader eagerly sticks with Dwight, knowing something is going to go wrong and trying to find out just what that something will be. Even as that something becomes more obvious, Dwight, a former paralegal herself, creates enough intrigue to lead to a satisfying conclusion. In fact, some of the better writing begins at the point in which Jack’s fate is finally revealed, while Mercedes yet has plenty to unravel.

The ending is a happy – if somewhat improbable, one, and seems to fit the overall message of hope that is pervasive throughout the book (and inherent in Bell’s character).

Bell is set in the San Francisco Bay Area where Dwight spent a great deal of her life. It is her fourth book but first novel. Here’s hoping she can keep it up.

Dave Moyer is an education administrator and is the author of Life and Life Only: A Novel.

This tale that spans 10 years is crafted to fit the locale, the San Francisco Bay Area/East Bay, the era, the 1980s to the 90s, and the human foibles of a rich array of characters carefully structured and revealed by debut author Jennifer Dwight. More a novel than a mystery, The Tolling of Mercedes Bell lulls readers by the rhythmic pace that is the unfolding of a new life for recently-widowed Mercedes and her seven-year-old daughter, Germaine.

Mercedes is an emotionally fragile, yet stubborn quasi paralegal. Her drunkard husband’s single car crash has left her penniless and in desperate need of a job. She and Germaine leave a rental house in Piedmont to settle into a rental cottage in an undesirable part of Oakland. Author Dwight has obviously frequented the areas she describes in minute detail. Coincidentally, my wife lived just blocks from the Grand Lake Theater in Oakland where Mercedes buys her newspapers and she vouched for the authenticity of the writing.

The biggest shift from the minor key of the musical score, yes this is movie material, comes when Mercedes has realized her goal of steady employment at a law firm. Given the era, the notion of a tall, handsome single lawyer becoming infatuated with her is no surprise; however, what follows is eye opening to say the least!

Long-time residents of northern California may have an advantage in figuring out the conclusion.

In the style and spirit of P.D. James, author Jennifer Dwight captures the tough terrain of a psychological thriller. Presented through an unflinching panoramic vision, the reader soon is pulled into the harrowing six-year journey of Mercedes Bell, a thirty-four-year-old paralegal; a recent widow with a four-year-old daughter. She soon finds what she believes is her dream come true. This award winning book novel lays the groundwork for its shocking, blood-curdling climax with a careful, meticulously crafted build-up of subtle clues.

After the midpoint in the narrative, when the plot reaches a crescendo following an accumulation of very subtle descriptions foreshadowing doom, we are still treated to vivid emotional imagery:

A review copy was provided by the publisher. This book was released on May 3, 2016.

Diana Y. Paul is the author of Things Unsaid: A Novel. You can read more of her entertainment and cultural reviews at the Unhealed Wound blog: 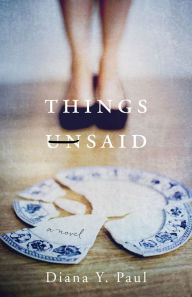 “She had a college-age daughter now who needed her attention. Her daughter’s dream choice was Stanford. Everyone deserved to have dreams. But in order to make her daughter’s dreams a reality, Jules needed to change. Now. And fast. And her parents had to change, too, or they would all be destroyed.”

Leo Tolstoy said, “All happy families are alike; each unhappy family is unhappy in its own way.” Things Unsaid is a novel about a very unhappy family; it’s a tale which may prove Tolstoy wrong as they appear to be unhappy in a common way. This is a typical American family in which each member cares far too much about what other family members think, do and say; for some reason, each member of the family is afraid of every other member.

Paul’s novel makes for an engaging, yet often disturbing, read. My suspicion is that readers who hail from highly dysfunctional families will get the most from it; they will identify with its characters. Those raised in emotionally healthy families – where people actually speak and listen to each other, and value each other’s hopes and dreams, may find it nearly incomprehensible.

Things is about a woman who sacrifices almost everything in her adult life, including her husband and daughter, to please her extremely demanding, elderly, parents. She must hit bottom before seeing that she’s throwing her own life away. It’s a valuable morality play, but I’d like to see Paul tackle something lighter and brighter the next time around.

Recommended for a select audience.

A review copy was provided by the author.