All In the Family

By now, if all were well and this were a normal weekday morning, Ellen would be in her forest-green school uniform and on the bus, almost at Beaconwood. Alex, in torn jeans and a sweatshirt, would be asleep on a train from Berlin to Hamburg, en route to his next German concert.

What genre designation is appropriate for this book? Firstly, there never is a “normal” or even an ordinary day portrayed within its covers. We jump right into the rambling narrative of Justine, a woman who has recently left her demanding career in London to move to the country with her husband, Alexander, and teen daughter Ellen.

Alexander is a well-respected opera singer who travels frequently to venues around Europe; therefore, his home base can be almost anywhere. Ellen has been enrolled in Beaconwood, a private school that bears no resemblance to the one she attended in London. Justine hopes to fulfill her fantasy of Doing Nothing, as she like to announce to anyone who will listen.

Some of the chapters are set in an alternate typeface that designates them as the work of a writer who is composing a novel about a family with some bizarre issues. Perhaps it is a work of fiction, or even a thinly disguised expose of an actual family in serious need of an intervention.

The plot skips around and has a jerky home-movie made in the 1950s quality. There are myriad odd occurrences and very strange characters that pop in and out of the tale. Justine is the subject of menacing anonymous phone calls that include death threats. One might wonder what has happened to set previously stable author Sophie Hannah on this wild, unpleasant and twisted ride.

Ms. Hannah’s prior work, Woman with a Secret, also suffers from a choppy beginning and a bit of confusing plot shifts. Here too are the trademark typeface shifts that she has employed in past novels. Woman with a Secret needs a list of characters to assist the reader in deciphering the multiple perspectives depicted throughout the tale. The husband and wife team of police detectives featured in the plot do not share a last name and their co-workers are numerous to say the least.

This time around the main character, Nicki Clements, is a woman who yearns for excitement in her “normal” life in the suburbs of London. She’s a wife, a mother, a sister and a daughter whose past haunts her. Damon Blundy, a caustic columnist for the Daily Herald, is found murdered with his mouth taped shut with tape. Nicki receives countless sinister emails from a person she cannot identify. Somehow she is linked to the murder. Her first-person narrative and the third-person narrative from the other characters’ perspective give the reader the feeling of being spun around with a blindfold in place. Once the blindfold is removed, it’s anybody’s guess what lurks in Nicki’s past and why she’s linked to Damon Blundy’s death.

If by now you are wondering what’s actually happening in Woman, I’m not going to tell you as it would take more space in this review than I’m willing to give.

Woman is recommended, for ardent Sophie Hannah readers; everyone else, no.

Woman with a Secret was released in trade paperback form on April 12, 2016.

The Living is Easy

One for the Money, Two for the Show, Three to Get Ready, and Four to Go!

After the Funeral: A Hercule Poirot Mystery by Agatha Christie (William Morrow, $12.99, 286 pages)

It’s summer and the living is easy; however, dying, not so much. Three classics that have been revived and a new Hercule Poirot tale are easy choices to bring along on vacation. All are British and they provide wonderful examples of the genre. Each has the charm and wit that fans expect.

Poisoned Pen Press of Scottsdale, Arizona, a publishing house dedicated to the mystery genre, has begun a series of rereleases of British crime novels from the golden age of crime writing. The British Library Crime Classics in this review are Resorting to Murder: Holiday Mysteries edited by Martin Edwards, and The Sussex Downs Murder by John Bude.

The title Resorting to Murder is a play on words as each of the 14 engaging short stories takes place in a vacation/resort setting. The variety of murders is impressive given the theme restriction. The book is easily read several stories at a sitting or parceled out one per evening – depending on the length of the reader’s vacation.

The Sussex Downs Murder comes complete with a map of the locations where the action takes place. Superintendent Meredith is called in to investigate when John Rother disappears leaving behind an abandoned car smeared with blood. The tale is full of twists and turns but the criminal responsible for John’s disappearance is no match for Meredith’s smart detecting.

In 2013 writer Sophie Hannah was commissioned by Agatha Christie’s family, estate and publishers to write a new Hercule Poirot novel. As a prelude to the release of said novel, Hannah was asked to name her favorite novel featuring Poirot. Her choice was After the Funeral. The rerelease of this book in trade paper includes a foreward by Ms. Hannah and a comprehensive listing of the titles in The Agatha Christie Collection.

As with all Poirot mysteries, the solution isn’t really plausible, rather, it’s the mental acrobatics the reader goes through while following Poirot’s investigation that makes for an enjoyable read. In this tale Cora Lansquentet, a widow, is savagely murdered the day after her brother’s funeral. Her announcement at the funeral that he was murdered sets the stage for the subsequent investigation of her murder. Each of the surviving attendees is a suspect. Never fear, Poirot is on the case, and, of course, he identifies the suspect – albeit after some laborious use of his little gray cells. 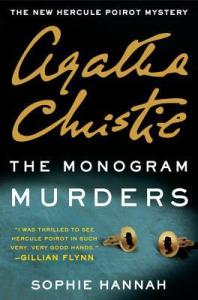 The physical book is a nod to Agatha Christie’s long history of Poirot novels. The pages inside the front and back covers are vellum and the text pages are deckle edge. Thus, the reader is primed for a classic British mystery.

Poirot dines regularly at a coffee house in his neighborhood. A young woman who is fearful for her life approaches him. Subsequently, Poirot learns of the deaths of three guests at a London hotel.

Hannah employs the locked door, mysterious clue and anxious stranger seeking Poirot’s assistance to launch her take on Christie’s legacy. Readers will not be disappointed as she is clearly up to the task. Poirot’s voice is true and the details of his investigation are highly reminiscent of the classics written by the original author.