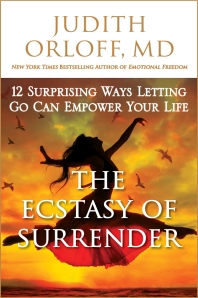 A review of The Ecstasy of Surrender: 12 Surprising Ways Letting Go Can Empower Your Life by Judith Orloff, MD.

“In the old days he would inspire them, lift their spirits, and send them back to their desks with renewed energy and enthusiasm.   Now he simply wanted to say goodbye and slip away.”

Henry Cage is a man who has earned the right to enjoy a quiet life.   At least it appears this way before his life turns into a series of explosions.   Cage, the founder of a highly successful international advertising firm based in London, is suddenly forced into retirement in November of 1999 – outfoxed by a legion of new, young and restless (rudely ambitious) partners who cannot wait for him to ride off into the sunset.

Henry Cage is barely out the door of the advertising firm when he learns that his ex-wife, Nessa, is gravely ill.   Nessa lives in Florida.   She does not have much time left and would like to see Henry.   Henry very much loved Nessa until she had a well-publicized affair with an actor, something that brought shame and ridicule to Henry once it was mentioned in London’s daily papers.   Although decades have passed, Henry’s not sure that he’s forgiven Nessa and he certainly has no desire to revisit past events.

And then there’s an angry young man out there on the streets of the city, a failure in life – a man with a broken arm (broken like his future) – who seeks to take his anger out on a symbol of success.   By chance, this man happens to pick Henry as the person whose life he will make miserable…  So miserable does he make Henry that it appears a confrontation between the two is inevitable; it’s likely to be a confrontation so dramatic that only one of them will survive.

The reader also learns, through a non-chronological device, that Henry will have even more to deal with – the loss of the one thing that he sees as irreplaceable.   This is a morality tale about good versus evil, hope versus surrender, and love versus despair.   You’ll want to root for Henry to survive as he’s a representation of us all as we battle the unexpected (and often undeserved) events in our lives.

If you’ve read and loved the novels of Catherine O’Flynn (What Was Lost, The News Where You Are), you will no doubt also love this work.   Like O’Flynn, Abbott writes in a quiet, reserved English voice.   Although you may rush through it, the impression is given that the writer had all of the time in the world to construct the tale – there is never a sense of modern-day impatience.

Abbot’s ability to capture and make meaningful the small details in life calls to mind John Burnham Schwartz (Reservation Road, The Commoner), whose novels are always engaging.   Further, there’s a tragedy in Piano Player that mirrors something that happened in Reservation Road.

David Abbott, whose real life just happened to be a lot like the life of Henry Cage, has fashioned a wonderful debut novel.   I certainly look forward to reading his next story.   Highly recommended.

A review copy was received from the publisher.   The Upright Piano Player will be released on June 7, 2011.