“It’s time more readers found out about T. M. Shine…  (He’s) one of the funniest writers I know.”   Dave Barry

If you like Dave Barry or David Sedaris, you will undoubtedly like T. M. Shine.   If you love Lisa Scottoline (“Why My Third Husband Will Be A Dog”; “My Nest Isn’t Empty, It Just Has More Closet Space”), you will very likely love T. M. Shine.   Like Barry and Sedaris, Shine is often clever; but more often he’s simply hilarious like Scottoline.   For example, at one point in Nothing Happens, he wonders why drugs have so many listed negative effects.   He asks why there are “never any good side effects like ‘long term use of this medicine could add six inches to your broad jump or lead to…  improved cornering skills while driving at high speeds.’   Stuff like that.”

This is a semi-autobiographical novel about being suddenly unemployed, and then being unemployed for a long period of time.   Shine was, in real life,  laid off from his steady writing gig.   He decided to write a memoir about his experiences but his publisher wanted a novel instead, so this is a true-to-life story.   (If you want to enjoy yourself, Google Shine to find his sadly funny and sometimes quasi-ranting pink slip website.)

The male protagonist Jeffrey Reiner is let go from his job writing for a South Florida weekly.   He initially rushes to find a new job before his severance pay and unemployment benefits run out.   Then he begins to feel guilty for appreciating his free time before finding out that he has a third less time than he thought to get back into the working world (his high maintenance family is burning through his money stash at warp speed).   He eventually wonders if he’ll be out of work so long that he’ll lose all desire to ever work again.   But this is not the least of his problems…

Reiner’s married to a woman whom he knows he’s lucky to be married to, but once he loses his job the glue that holds their relationship together starts to weaken.   Reiner’s wife has in the past found him to be “steady,” something he no longer is; in fact, he’s dazed and confused.   Ironically, as Reiner becomes less comfortable being around his wife (and vice-versa), he develops a strong relationship with his formerly troublesome children and his physically troubled dog.

Reiner winds up tackling some strange jobs assigned to him by a hustler who is not exactly a well-respected man in the community.   He also develops an interesting relationship with the young woman who lives next door, making Reiner’s wife wonder if this is his attempt to be like old Bill Murray in Lost In Translation.   Oh, and he needs to ensure that everyone in his household uses less energy, something that’s nearly impossible – his teenage kids live like nocturnal raccoons. 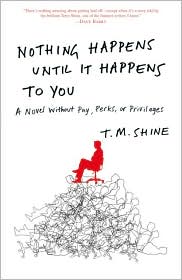 Anything more said about the storyline would just subtract rather than add to the reader’s enjoyment.   Let’s just say that the tale ends with our protagonist learning about what’s really important in life, and it may not be a corner office.   This one’s fun!