The Twelfth of Never

Not your average love story…

I knew your father for four years before I agreed to even go on a date with him, Eleanor. We dated for another five before we got married. You can’t possibly know enough about another person after a few months.

Life lessons happen when they are least expected. Or, as John Lennon is frequently quoted as saying, “Life is what happens to you while you’re busy making other plans.” The lessons to be learned in Forever, Interrupted are deeply felt by the characters and the reader. The questions raised within the tale include: can a person love someone they’ve only known for a short time, will love last for decades, and is grieving possible with a stranger?

There is no need to tiptoe though these pages while steeling yourself for the gut-wrenching sadness of a love lost which is often placed at or near the end of a novel (think One Day). Taylor Jenkins Reid gets right down to business in the first nine pages of this her debut novel. Ms. Reid is remarkably adept at conveying feelings using crisp dialogue. She uses the literary technique of alternating chapters that move between the end and the beginning of Elsie Porter’s whirlwind romance with Ben Ross.

Ben and Elsie have been married a few days and they are enjoying the comfort of being together as husband and wife when she has a hankering for real Fruity Pebbles. As if in a fairy tale, Ben hops up from the couch and zooms off on his bicycle to the local CVS to buy a box of Fruity Pebbles for his darling new wife. That’s when all hell breaks loose, literally, as the sirens of fire engines and emergency vehicles right down the street grab Elsie’s attention. Ben has been the victim of a collision with a large moving truck that snuffs out his life.

Although Ben and Elsie briefly had each other, she discovers that being a widow carries a stigma and grieving brings nearly uncontrollable heartache. Elsie’s best friend, Ana Romano, is a stalwart buddy who willingly jumps in to keep Elsie afloat and Susan Ross, Ben’s mother, is resistant, resentful and rude when she meets Elsie at the hospital following her son’s tragic death.

There are others who populate Elsie’s climb back to normal — whatever that might be. The work required by all is remarkable and demonstrates to Elsie that she is loved and can love again, just not with Ben. 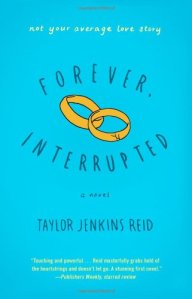 A review of Forever, Interrupted: A Novel by Taylor Jenkins Reid.