There’s a remarkable similarity to the opening scenes of The Informationist and Fever Dream by Preston and Child. Both tales begin in Africa and they contain some of the most electrifying examples of tension and suspense this reader has ever encountered.

Vanessa Michael Munroe is the informationist. Her beauty and brains are surpassed by the cold-blooded determination she brings to each secret assignment that pays her well. Knowledge of many languages, national customs and human nature assist Michael, as she likes to be called, in succeeding on each job. Corporations, politicos and wealthy individuals have provided her with more than sufficient means to live a comfortable life; however, money and comfort do not motivate her. The assignment Michael accepts in this tale is to locate the missing daughter of a Texas billionaire. The daughter, Emily, was seen in the back country of Africa traveling with two young men seeking adventure.

As one might imagine there’s ever so much more to the assignment than travel to trace the path taken by Emily and her companions several years prior to the time of the novel. Michael visits parts of Africa where she grew up and learned quickly to fend for herself. Beauty, brains and agility mask the scars — both physical and emotional — that are at the heart of Michael’s very being. A woman as tough as Michael seems beyond the ability to feel love. Perhaps it was driven out of her by her mentor years ago.

Be prepared for a very quickly-paced adventure and be sure to sit in a corner where no one will be able to sneak up on you. Yes, The Informationist will pull you in and hold you to the very last page.

A review copy was provided by the publisher. “…a protagonist as deadly as she is irresistible.” Vince Flynn, author of Kill Shot: An American Assassin Thriller.

James Cameron has bought the film rights to this female-driven novel, which he plans to produce and direct at some point in the future. 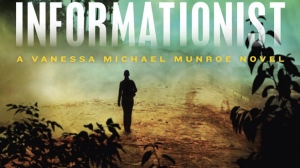 A review of The Informationist: A Vanessa Michael Munroe Novel by Taylor Stevens.