The Boomers in our audience will remember what things used to be like during the late 1950s and the early 60s.   A recording artist, like Chubby Checker, would have a hit with a song like The Twist; which meant that the follow-up 45 single had to sound as close to it as humanly possible (this usually meant a virtually identical tune with different words attached to it).   In Chubby’s case, the next song was Let’s Twist Again.   It is to the credit of the Beatles that they broke this pattern of releasing songs that were virtual clones of each other.

Sometimes as a reader and reviewer I see this same pattern applying itself when it comes to popular fiction.   Let’s say that our debut author Christy Crafty writes a novel called Becky from Bakersfield.   Against seemingly all odds this story of a woman who can see what is going to happen in people’s futures becomes a moderate success.   So what happens next?   You guessed it, Christy does not want to rock the boat so she releases a follow-up (and the titles and book covers will naturally be quite similar) called Florence from Fresno.   This will turn out to be almost the same tale except for the fact that this time around our female protagonist can see what happened in the past of the lives of the strangers she meets.   The third book may be Sally from Stockton, about a woman who knows when people will die as soon as she encounters them.

Now this may not be such a horrible strategy from a sales standpoint, except for the fact that book one is likely going to get great reviews, and each succeeding variation is going to be less charitably commented on.   Eventually, Christy herself is likely to see that she’s put herself into a rut.   And then even her most loyal readers will begin calling for something new and original from her.

Why are reviewers and readers going to be increasingly disappointed in this commercial product?   Because the freshness that accompanied the original novel from author Crafty is slowly leaked out like air from a damaged tire.   The once delightful story that gets reworked over and over again becomes dull and flat.

It is my own view – and it’s much easier for me to say since I do not write novels – that the moderately to highly successful new author should, after the release of the first well-sold and reviewed novel, quickly change styles before the release of the second book.   Why?   To prove to readers, critics and the world that he/she is a writer, one who can write novels of many forms, short stories, poetry (if the muse strikes), and perhaps articles on politics and sports.   Again, why?   Because this is the creative process – this is the essence of writing.   Writing the same story repeatedly is not creative and fails to display one’s talents.

It was the singer Natalie Merchant who noted that you simply cannot give the public what it thinks it wants, which is candy (musical or literary) all of the time.   If you do, the public gets tired of you after it comes down from the sugar high – the false creative rush.   Once they get tired of the same old thing, they not only stop buying it, they also join the critics in their anguished howls.

So what is the moral of the story?   That creativity has its costs.   Being creative, continually and over a career, takes courage.   It takes real courage to write what you need to write even if it is not what you wrote before…

Just look at the careers of this country’s most highly rewarded authors – the Capotes, the Mailers and others of their ilk – and you’ll see that they did not settle for rewriting one story time after time.   (Truman Capote’s Breakfast at Tiffany’s and In Cold Blood could not be less similar.)   They branched out; they changed even if simply for change’s sake.   They stayed alive, as the Beatles did with their music, ever evolving, ever-growing; each and every collection of songs by John, Paul, George and Ringo was the result of new periods and experiences in their lives.

To borrow the words of Bob Dylan, life should be about new mornings.   It’s not dark yet, unless you elect to go living in the past, the shades drawn tight.

Pictured:  The Girl in the Green Raincoat: A Tess Monaghan Novel by Laura Lippman, which was released by William Morrow and Harper Audio on January 18, 2011.   This book (actually a 176 page novella) has absolutely no relationship to the matters discussed in this article – I simply like the intriguing cover image which makes me want to read it.   Look for a review of The Girl in the Green Raincoat to appear on this site in the near future.

The Language of Secrets by Dianne Dixon

It was Jackson Browne who said of the past, the things we remember seem so distant and so small.   The past – and its impact on the present – is the theme of The Language of Secrets by Dianne Dixon.   This is the story of Justin Fisher, a man who grew up outside of Los Angeles, the son of Robert and Caroline Fisher.   But somehow he thinks that this was just a part of his life.   He begins to remember growing up as “T.J.” with a red-haired mother, living in the snow of the east coast, perhaps in Boston.   “…the information was presenting itself to him in erratic bursts.   In bits and pieces.   Out of nowhere.”

In this tale by a Hollywood screenwriter turned author, Justin’s search for his past is painful.   It is a past filled with family secrets and a great deal of anger.   He is just one of the characters who have both pleasant and painful memories of home and relations.   “Home is the place in which you were rooted by your beginnings…  It marked and branded you.   And if it was a broken, desolate place it would leave you hungry and dangerous, and punished, for the rest of your life.”

The Language of Secrets repeatedly deals with the tension between remembering one’s childhood home as a place of sanctity and safety, and as a place to escape from.   “Mom, I don’t need a house.   I’ve got a condo.   I’m head of publicity for a major movie studio.   I’ve got a kick-ass life that I love.   I have no interest in getting married and settling down…  (This house was) a nice place to grow up in.   But that’s the whole point of being a kid and then becoming an adult.   You grow up.   You move on.”

So says one of Justin’s sisters to his mother.   But usually in a family at least one of the siblings must lead the life chosen by his or her parents.   In this story, it is Justin’s father who winds up living a second-hand version of his own father’s insurance salesman’s life.   Disastrous consequences follow for everyone.

Clearly, Dixon has devised a fascinating set-up for a novel.   There’s love here, but also – as previously mentioned – a lot of anger and rage.   Rage that comes from seeking independence, even as a fully grown adult:  “I have a rich father-in-law who treats me and my wife and child like we’re a wholly owned subsidiary.”

Dixon’s strength is in getting the reader to want to follow along with a not-so-pleasant tale, wanting to turn the page, and the next, with a bit of trepidation as to what’s ahead.   In Language, life is not what it seems to be.   This is demonstrated by jumbled memories of jumbled events.   (Haven’t we all been corrected by family members about when and where something in our past occurred?   And don’t we, nevertheless, continue to believe in our own version of events?)

The difficulty with reading Language is that events seem to happen in strange order, in non-chronological fashion, even when the author identifies the time and place.   The reader might be tempted to make a chart of the events in the story, and may find that they just can’t chart out in sequence.   Perhaps this is Dixon’s way of reminding us that life remains anchored in confusion, and fog.

Language is such a complicated story that in the end there’s no great revelation.   This reader would love to see a follow-up from Dixon that is a bit simpler and told in chronological order.   Still, The Language of Secrets serves as an indication that a very promising new writer has arrived on the scene.

“A sense of desperation rose in Caroline…  She had unwittingly written her life into a language of secrets, into an indecipherable code riddled with questions.”

An advance review copy was provided by Doubleday.   The Language of Secrets will be released on Tuesday, March 23, 2010.

This review is dedicated to the memory of Roberta Lou Rallojay Benson. 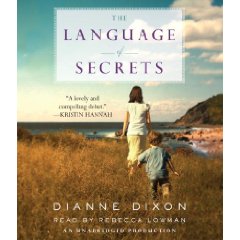