The Dead Caller from Chicago: A Mystery by Jack Fredrickson (Minotaur Books, $25.99, 320 pages)

“I’ve learned to hate Russians/All through my whole life.” Bob Dylan (“With God on Our Side”)

The Dead Caller from Chicago is the fourth in a series of Dek Elstrom novels by Jack Fredrickson. The first, A Safe Place for Dying, was a Shamus Award nominee (sponsored by the Private Eye Writers of America) for Best First Novel. The second, Honestly Dearest, You’re Dead, was a Mystery Guild selection.

Frederickson’s bio admits only to a former career as a consultant, owner/manager of an interior design/commercial furnishings firm, and living with his wife somewhere west of Chicago.

Dead Caller starts with a phone call from Snark Evans who was reported dead decades ago. It takes place primarily in Chicago and the faux suburb Rivertown, though any reader who hopes to be drawn by a Chicago backdrop, imagery or traditions (other than corruption) will be disappointed, because there is little of that.

What the reader does get is a private investigator by the name of Elstrom, who becomes entangled in a “confluence” of circumstance that include the return of an ex-lover and news anchor, Jenny from San Francisco – who is equal parts hot for him and a story; an ex-wife who is kidnaped (and only seriously referenced 169 pages into the story); two murders; the disappearance of an old “friend”: an art heist; and, let’s not forget, Russian gangsters to boot.

Fredrickson is generally successful in balancing the construction of a plot, the need to move it along at a rapid pace, and the development of characters that have some pull for the reader. The second to last chapter explicitly ties all of the information together, which is probably good, because there are things that don’t hang together as well as intended.

The last couple of chapters more than hint at continued dalliances between Jenny and Dek, so expect that a fifth novel is in the works.

There is more promise than delivery in this book, but the novel is intriguing and has merit. The writing in engaging and solid, with the exception of too many “cutesy” lead-ins to the next scene or tie-ups of some type of situation or another. The repeated use of this device borders on annoying, yet can be overlooked on the whole as there are scenes that are very well done. There are several examples of the author capturing the reader’s attention, depicting an event or character well, or just plain advancing the plot effectively. But there are just a few too many times when this isn’t the case.

Examples from both ends of the spectrum include this resonant, succinct passage: “It had started to snow. I stepped out of the Newberry into great, sticky clumps of it, coming down as though some maniac upstairs were sitting in the dark, shedding wet, white felt. March was like that in Chicago.”

And these lesser attempts: “I bid a silent adios to the tattooed backsides at the bar and tumbled off to my room at the 8, sure to sleep well and safe.” “The Bohemian, that knower of all things, had done me well. Leo was in sharp, professional hands. Protected for now. Only for now.”

There are very few perfect novels. All nitpicking aside, this book mostly satisfies and will be enjoyed by fans of the crime novel genre.

Dave Moyer is the author of Life and Life Only: A Novel. 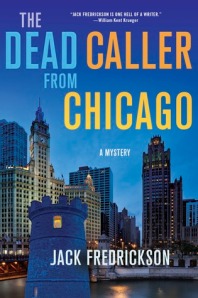 A review of The Dead Caller From Chicago: A Mystery by Jack Fredrickson.