Tag Archives: the edge of madness

Only A Pawn In Their Game

“(Bobby Fischer was) the greatest genius to have descended from the chess heavens.”   Mikhail Tal

“(He was) perhaps the most mythologically shrouded figure in chess.”   Garry Kasparov

“I am the best player in the world.”   Bobby Fischer

Bobby Fischer’s life was proof positive that genius often lies close to madness.   The boy who once went to high school in Brooklyn with Barbra Streisand and Neil Diamond made chess a household game in the U.S., and at one time he was one of the two best known people in the world – along with Cassius Clay/Muhammad Ali.   Fischer was a child prodigy at chess and he became a grandmaster (at 15) and World Champion who, notably, would win every chess match or tournament he completeted from the age of 23 onward.

Rumors began to spread that Bobby and his mother were estranged…  (However,) he did remain close to his mother…  they could agree to disagree.

Frank Brady decades ago wrote the then-seminal biography of Fischer, Bobby Fischer: Profile of a Prodigy, and he uses this opportunity to both update and correct so-called facts about the life of the chess legend.   He also tells us much about the relationship between Fischer and his mother Regina.   Most of the bios of Fischer have claimed that he and his mother were estranged, which is simply incorrect.   As Brady notes, Fischer was actually close to – and a lot like – Regina:  “As Regina had proselytized all her life for various causes – always liberal and humanistic ones – so, too, Bobby (became) a proselytizer.   The pawn did not stray too far from the queen.”

The misunderstandings about Bobby and Regina appear to stem from the fact that they had very different positions on political issues.   However, they were able to set these aside in order to maintain a respectful personal relationship.

This is, to be certain, an account of Fischer’s late-in-life madness – his “state of increasingly frequent paranoia” – which destroyed his reputation as a gaming genius.   Although Fischer was half-Jewish, he became a raving anti-Semite and a foe of the United States government.   To his credit, Brady places all of this in perspective, noting that Fischer was battling a form of mental illness that he could not accept or control.   Fischer, for example, was living virtually penniless on the streets of skid row in Los Angeles in 1975 when he rejected a $5 million dollar purse to defend his World Championship title against Anatoly Karpov.   It still seems shocking:  “…five million dollars!  It was the largest refusal of a prize fund in sports history.”   (Emphasis in the original.)

It is hard for Brady to recreate the context of a time when chess was a spectator sport; a time when 10,000 fans and spectators would show up to watch Bobby Fischer play Tigran Petrosian or Miguel Quinteros.   What Brady does extremely well – a major failing with most bios of talented figures – is to detail for the reader exactly how smart, how intelligent Fischer was in his prime.   So how smart was Fischer?   Well, before playing Boris Spassky for the World Championship, he demonstrated that he had memorized every move made by Spassky and his opponents in 355 games of chess – over 14,000 individual moves!   Fischer could recite every move of every one of these matches the way another person might recite a poem or the lyrics to a song…  But, for him, it was not a way of showing off – it was simply a tool of his intellectual trade.   Fischer was nothing in his life if not the most prepared individual who ever sat down before a chessboard.

Absent the behaviors created or caused by his mental illness, Fischer would likely have died as the  most beloved chess player of all time.   He was certainly loved by his great rival Spassky, who said at Fischer’s death, “My brother is dead.”

This is a beautifully-detailed and well-rounded biography of “America’s greatest prodigy,” a man who died near “the edge of madness.”   Endgame checkmates any all of the other bios of the brilliant but troubled man who may well have been the greatest chess player of all time.

A review copy was provided by the publisher.   Bobby Fischer’s IQ was 181. 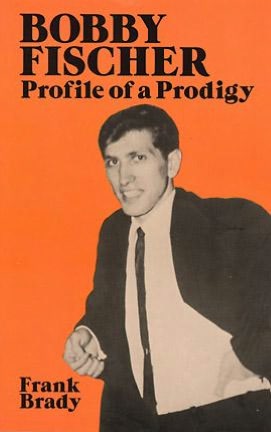