Risk: A Novel by Colin Harrison

Risk is a crime novel, it might be said, that is not what it purports to be.   It is the story of one George Young, a lawyer at an insurance firm, who is asked to solve a mystery.   The mystery has to do with how and why the son of the firm’s late founder was killed in an apparent accident in New York City.   Young feels that he owes his good fortune in life to the late Mr. Corbett who rescued him from a lackluster existence as a prosecutor.   Therefore, he agrees to try to solve the mystery without a fee. 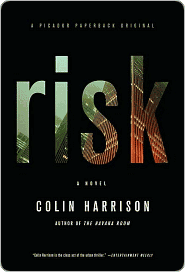 But Young is actually less a lawyer than an insurance fraud investigator, so investigating a suspicious death would appear to be right up his alley.   Then there’s the fact that this is actually a 174-page novella, or a two-thirds scale novel.   It often reads like a movie manuscript, quick with easy-to-visualize scenes and light on character development.

Risk would be a perfect book to read while commuting since the story is not too complex or demanding.   Harrison’s style as an author calls forth James Scott Bell (Try Fear), who writes of crime and dark figures with tongue a bit in cheek.   George Young, like Bell’s lead figure Ty Buchanan, plays investigator with a smirk and sometimes a joke.   He’s a bit too relaxed to be real and would probably be played by a young Bruce Willis-type in a film version.

More troubling was the implausible ending – a movie script cliché – which tied things up neatly but turned the tale into a shaggy dog story.   I’d stay away from this one unless you’re the type of reader who enjoys chasing his or her own tail.

A review copy was supplied by Picador and Library Thing.