Tag Archives: the Heroes of the Hospital 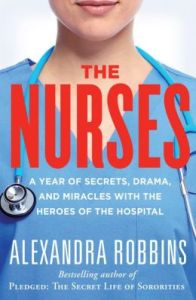 The Nurses: A Year of Secrets, Drama, and Miracles with The Heroes of the Hospital by Alexandra Robbins (Workman Publishing, $24.95, 360 pages)

My mother worked in a hospital and I often wondered what went on during one of her nursing shifts. Alexandra Robbins (Pledged: The Secret Life of Sororities) has answered that question in The Nurses, in which she covers every aspect of the workers she calls “the heroes of the hospital.” Nurses are, of course, the staff members that patients interact with the most.

This nonfiction account is based on actual events in three urban hospitals – possibly three based in Los Angeles – during one year. The reader learns about nursing cliques, the positive and negative relationships between doctors and nurses, the attachment that can form between patients and their caregivers, and the unique status of the male nurse. Problem patients – those who sabotage their own care via demanding attitudes and criticisms of hospital staff members, are examined in detail. It turns out that there are many ways in which the hospital workers can get a dose of revenge! (Fair warning to all.)

Robbins delivers the message that whatever hardships members of the nursing profession encounter – and there are many (including being burdened with tasks that physicians feel are beneath them and compassion fatigue) – nurses tend to feel quite satisfied with their line of work.

To her credit, Robbins helpfully identifies a list of issues that need to be fixed in the profession, and also supplies her ideas as to how this can be done. This eye-opening book should appeal to future and current nurses, their family members, and anyone who may potentially be in need of hospital care at some point in their lives.

A review copy was provided by the publisher. The Nurses will be released on April 21, 2015. 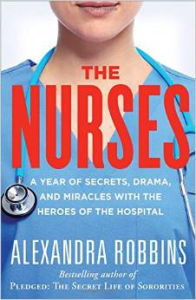 A preview-review of The Nurses: A Year of Secrets, Drama and Miracles with the Heroes of the Hospital by Alexandra Robbins, which will be released on April 21, 2015.