Tag Archives: The Power of Now

Women coping with the traumas of their past, especially in middle age, seems to be a fascinating topic for many authors who are themselves women. Men and Dogs features Hanna Legare, a daughter of the South whose life trajectory has landed her on the West Coast – at Stanford University followed by a business career and marriage in San Francisco.

At the beginning of this tale, the focus of Hanna’s obsessive energy is the disappearance of her father, Dr. Buzz Legare, a well-liked and good-looking man. The event, a boating accident, took place in April of 1985 in Charleston, South Carolina, Hanna’s birthplace. Hanna refuses to believe that her father is dead. She constantly badgers her family and people from her past demanding a clear-cut explanation for the lack of a body or evidence that Dr. Legare has actually died.

After setting the theme of the novel, author Crouch brings the reader (or, in this reviewer’s case, the audiobook listener) to the year 2009 when Hanna brings her obsession to the boiling point. Her husband and business partner, Jon, seems to be fed up with the indiscretions and affairs she has indulged in over the last few years. Hanna’s defense, dating all the way back to high school, is that she has difficulty feeling secure and, therefore, she uses sex as a way of feeling in control. Hanna’s brother, Palmer, who is gay and veterinarian in Charleston, has also been unable to commit to a lasting relationship. The threads of their unraveling lives cross when Hanna goes back to Charleston for a time-out.

At first the story seems to be a novel/mystery complete with a well-developed set of characters. By two-thirds of the way through, a new theme becomes apparent – that of a cautionary tale. Perhaps a listener or reader who is herself entering middle age would find a sense of life’s lessons as the last of the story unfolds. For this reviewer, the message is clear; do not dwell on the past. Hanna could have benefitted by reading Eckhart Tolle’s The Power of Now.

The audiobook was purchased by the reviewer’s husband. Katie Crouch is also the author of Girls in Trucks: A Novel.

Coping with imposed life changes is the main theme for Jane Porter’s new novel, She’s Gone Country.   The central character, Shey Darcy, is an almost-forty-year-old former fashion model whose image appeared in Vogue and in the Sports Illustrated swimsuit edition.   Shey’s glamorous life in New York City is cut short when her husband declares that he’s gay and wants a divorce.

What follows is a sprint back to Shey’s roots in Texas.   She takes her two sons to live in her mom’s house on a sprawling family-owned ranch in a bid to feel more secure.   This is a tale of growing up to reality and grasping a sense of how to navigate life when the veneer of New York life’s distractions is peeling away.

Author Jane Porter presents the story in a stream of consciousness first person narrative in the present tense.   Shey is stuck in her feelings about the life she has been forced to leave behind.   She dwells on her husband’s betrayal, the trials of motherhood and her very shaky self-image.   Shey’s monologue is often repetitive, and it is a perfect example of self-talk by the mind vs. being in the now, as detailed in Eckhart Tolle’s The Power of Now.   Shey loses her way, her sense of now and she’s stuck trying to cope with her brain chatter.

An odd combination of contrasts crop up throughout the story.   Men are generally described as hunky or highly attractive, and comfortable with old cars and the peeling paint on the Texas ranch house where Shey lives.   Women are depicted less charitably.   Porter describes their actions and fashion choices in a way that is just shy of brutal.

The notion of raising boys is foreign to this reviewer, but Jane Porter is the mother of three boys.   She makes it seem like a lot more work than having girls.   Even though the story is told in the first person, the feelings and actions of the other characters are well-developed.   This is especially true for Shey’s two sons.   Each has his own personality and needs as together they struggle with having been uprooted from post private school city life and plopped down onto a small country setting. 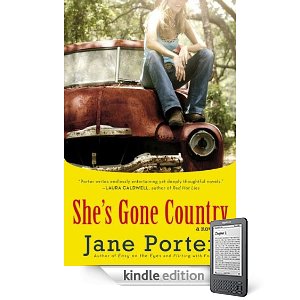 Since this book is clearly of the chic lit genre, it was amazing to this reviewer that the most sympathy and tears were brought out by someone other than the main character – who knew?

This is a most enjoyable read for women of a certain age.   Recommended.

This review was written by Ruta Arellano.   A review copy was provided by Hachette Book Group U.S.A.   She’s Gone Country was released by 5 Spot on August 23, 2010.

C. Clinton Sidle is a recognized expert in consulting, leadership training, and human potential development.   This Hungry Spirit is a departure from his previously published works that focused on strategic planning and achieving personal and organizational greatness.   Instead, Sidle uses his personal journey through difficult times as the structure for sharing the skills needed to make it past the rough spots we all face.   (The original subtitle of this book was Seeking Happiness in the Heart of Discontent.)

This book is well-organized.   There are exercises within each chapter designed to engage the reader and bring to life the concepts being taught.   Key phrases, pearls of wisdom, are highlighted in sidebars that accompany the text.   Sidle draws from a wide variety of resources to make his pitch for mindfulness and introspection.   His approach seems best suited to a reader who has not yet explored the concepts of meditation, keeping a journal and opening one’s heart.

It’s easy to picture the author leading workshops and drumming up enthusiasm for the topic at hand.   He conveys a sense of importance and necessity when describing the steps that can lead the reader to a calmer, more fulfilling, life.   However, Sidle’s writing is a bit labored.   This reviewer sensed that he would rather conduct an interactive workshop than be restricted to mere words on a page.   His message is bold and somewhat aggressive.   The feeding of the hungry spirit becomes a mission with goals and objectives, not unlike the leadership skills and human potential topics he is known for in business and military circles. 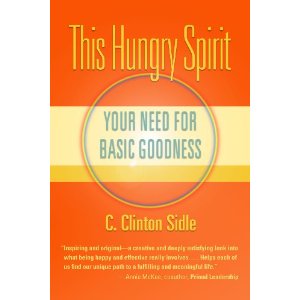 A counterpoint to This Hungry Spirit can be found in The Power of Now by Eckhart Tolle.   Many of the concepts are quite similar; however, the tone and mood created in The Power of Now is highly suggestive rather than direct and blunt as is the case with This Hungry Spirit.   It will fall to the reader to decide which approach is likely to be the most effective for his/her personal needs.

Guardians of Being combines the words of Eckhart Tolle, author of The Power of Now and A New Earth, with the whimsical illustrations of Patrick McDonnell, the creator of the Mutts cartoons, in a heartwarming inspirational and joyful package.   The Oprah Magazine has called the book “an inspired collaboration between spiritual teacher Tolle and comic strip artist McDonnell.   A book to make you wiggle with joy.”

From the publisher:  “More than a collection of witty and charming drawings, the marriage of Patrick McConnell’s art and Eckhart Tolle’s words conveys a profound love of animals, of humans, of all life-forms.   Guardians of Being celebrates and reminds us of not only the oneness of all life but also the wonder and joy to be found in the present moment, amid the beauty we sometimes forget to notice all around us.”

This is a book to be treasured.   The wisdom of the words, combined with the charming illustrations, make this a book to be savored, not just read.   Browsing through this book is an almost meditative experience, and it will most definitely remind the reader about what really matters in life.

Two of my favorite quotes from the book are:

Everything natural – every flower, tree and animal – has important lessons to teach us if we would only stop, look, and listen.

Just watching an animal closely can take you out of your mind and bring you into the present moment, which is where the animal lives all the time – surrendered to life.

I have always believed that animals are amazing teachers.   It’s nice to see that I’m in good company.   Treat yourself to this book – and while you’re at it, pick one up for your closest friend.

This review was written by Ingrid King, author of Buckley’s Story: Lessons From a Feline Master Teacher.   Buckley’s Story will be reviewed on this site in the near future.   Thank you to Ingrid for allowing us to reprint her review.   You can read more of her writings about very fine felines at http://consciouscat.net .

I love my cats because I love my home and after a while they become its visible soul.   Jean Cocteau

The Weight: The Story of Forgetting

We slouch under the weight of our memories…   This is just one of the brilliant notions revealed by first-time author Stefan Merrill Block in his unique and monumental novel, The Story of Forgetting.   I’m not going to play hide-the-ball, I’ll come right out and say that this novel (originally released in 2008) is one of the two best – along with Everything Matters! by Ron Currie, Jr. – that I’ve read this year.

Forgetting offers two stories melded together…   The basic story concerns the impact on a family of a parent’s early-onset Alzheimer’s; a family which is, shall we say, a bit odd.   “Abel…  is an elderly hunchback who haunts the remnants of his family farm in the encroaching shadow of the Dallas suburbs.”   And Seth may be a teenage near-genius who seeks to rapidly develop a cure for the dreaded disease that leads to forgetting – both mentally and physically – and death.

The other, imbedded, story is of a fantasy land named Isidora where people live near perfect lives in cities of gold.   Amnesia Clubs are formed “to discover a way to forget.”   In this imaginary and parallel universe memories are prison bars and forgetfullness is freedom. 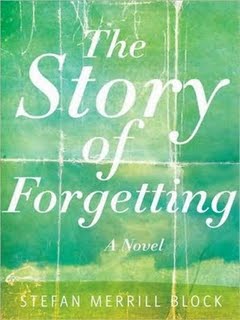 As with Everything Matters! it is virtually impossible to say anything more about the storyline without giving too much away…   What is clear is that Block writes laser-focus fiction in the manner one of our very best writers, Joan Didion, writes of real things and real life.   (What a gift.)

This book may shake-up your way of looking at the past and present in your own life.   It is very much about the power of now:   “To remember nothing.   What more could one possibly ask of eternity?”

Review by Joseph Arellano.   Note:  This book was released in trade paperback form on April of 2009 (Random House).