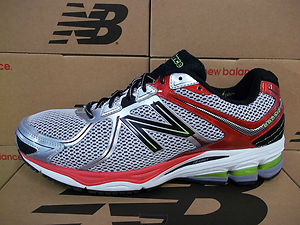 The New Balance (NB) 880 v2 (v2 stands for version two) is a modern classic cushioned running shoe that will help some avoid the agony of the feet. The shoe presents itself with a nice medium-wide fit, and a better fit in the arch area. Heel strikers will love the exemplary build-up of solid padding in the rear; more than a bit reminiscent of the Nike Air Max running shoes of the ’90s. The raised heel will please traditionalists who aren’t rushing out the door to pick up a pair of minimalist running shoes.

The NB 880 v2 forefoot is extremely flexible which can help to prevent toe cramping in some runners with relatively inflexible (read, flat) feet. The insole allows the toes to lie flat, and there’s no apparent metatarsal pad bump – something that can actually irritate those with existing metatarsal issues. And there’s a midfoot stability under arch wedge plate which fortunately does not interfere with one’s normal running style, neutral or otherwise.

The underfoot cushioning seems to be of the Goldilocks “just right” variety – enough to protect against rough road surfaces but not enough to deaden the enjoyment of the ride. Even better, while the sole returns some energy to the active runner it does not create a distracting bounce.

The lacing of the 880 v2 is off-center which reduces pressure on the sometimes sensitive upper-foot area.

This particular running shoe may be a bit hard to find as New Balance has begun to release some of its v3 (version three) models such as the NB 890 v3. I ordered my pair with the assistance of a local running store offering a discount on special orders. The good news is that once the NB 880 v3 is released, you should be able to order the 880 v2 – as an “endangered” shoe – via several discount online running shoe purveyors. However, you may want to order a pair right now to ensure that you can get it in your size.

The NB 880 v2 is a running shoe that provides a significant amount of protection for the feet while not attempting to modify one’s natural running style. This makes it a bit of a rarity these days. It’s also a running shoe that comes in nice, not garish, colors and it’s made in the U.S.A. (in either Boston or Lawrence, Massachusetts or Norridgewock, Maine).

If the NB 880 v2 was a car, it might well be a cozy, comfortable and smooth riding Nissan Ultima – an automobile that’s made in the U.S.A. (Smyrna, Tennessee). No complaints here.

These shoes were purchased at The Running Zone in Elk Grove, California.

This article originally appeared on the Blogcritics Sports website: