“Sometimes God makes perfect people, and Paul Newman was one of them.”   Sally Field

“This country is better for his being in it.”   Robert Redford

I may have met Paul Newman twice, although it is far from certain.   According to family legend, I was one of the children in the park at night in Stockton, California watching as the filming of Cool Hand Luke took place in front of the Catholic church.   This was the scene in which a very drunk Luke chops off the heads of parking meters.   Whether I was actually present or not, I do not know.   What I am certain of is that years later I met Newman, for a few seconds, as he walked around the spectator grounds of the Long Beach Grand Prix.   It seems that he had just won a celebrity race and he was celebrating.   With the assistance of two younger men, he was offering plastic tumblers of fine wine – or red party cups filled with beer – to everyone he encountered.   It took only a couple of seconds to see that this was a man in love with life and living.   The joy in his blue eyes was one-of-a-kind.

Perhaps it’s precisely because Newman showed us the sparkle of joy in simple living that he had such an impact on so many.   As I purchased a Newman’s Own product yesterday, the grocery clerk told me, “I can’t believe that he’s gone.”   It’s a feeling and sentiment shared by many.

Lawrence J. Quirk’s biography is one of two with the same title; this is the superior one.   It’s the better account because Quirk is a movie expert and he does a fine job of explaining why Newman went into acting, and of reviewing the highs and lows of the actor’s career.   This Paul Newman was not perfect, he was human, but a very lucky one.   As Quirk relates, Newman – who was certain in his belief that he would  never win an Oscar – rose to the very top of his profession.   And so, “his greatest dream came true.”

Quirk, with his expertise, does not fawn over Newman as an actor.   For example, in writing about Butch Cassidy and the Sundance Kid, he opines that, “although Newman is very good in the film, he’s not quite as good as Redford…  (and) neither actor is exactly convincing as an old-time outlaw…”   Yet it’s this tough standard that makes Quirk’s sometime praise of Newman so valuable.   And he reminds us that Newman was not just an actor, he was a philanthropist whose Newman’s Own Foundation has never failed to raise and distribute less than $55 million a year for charities around the world.

If Paul Newman had just been terribly handsome, he would have been loved only by women.   But he could also be a man’s man, a guy’s guy:

“…he was essentially a likeable, friendly guy, especially with several beers in him, and he frequently bought the beer, (which) just made him even more appealing to his buddies…  (There were those who felt) extremely flattered by the attention of famous people, who feel proud and somehow legitimized that someone the whole world knows is taking an interest in them.”

“Newman has personality to spare; he loves practical jokes, having good times with his buddies, and lots of beer…”

Quirk notes that while Newman the actor usually starred in “macho fantasies,” as a director of movies like Rachel, Rachel he “showed a more sensitive side that he seemed determined in all other aspects of his life to keep hidden.”

Paul Newman was a fascinating man, something which Quirk affirms so well in this biography, and he was – Quirk never lets us forget – first and foremost an actor.   He was an Academy Award-winning actor, and loyal husband (“Newman was never really a skirt chaser…”).   He was a man who lived each day with gusto until he left us at 6:45 p.m. on September 26, 2008.   It was such a loss for this country, and for the world. 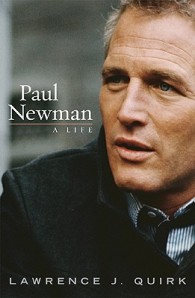 A copy of this book was purchased by the reviewer.