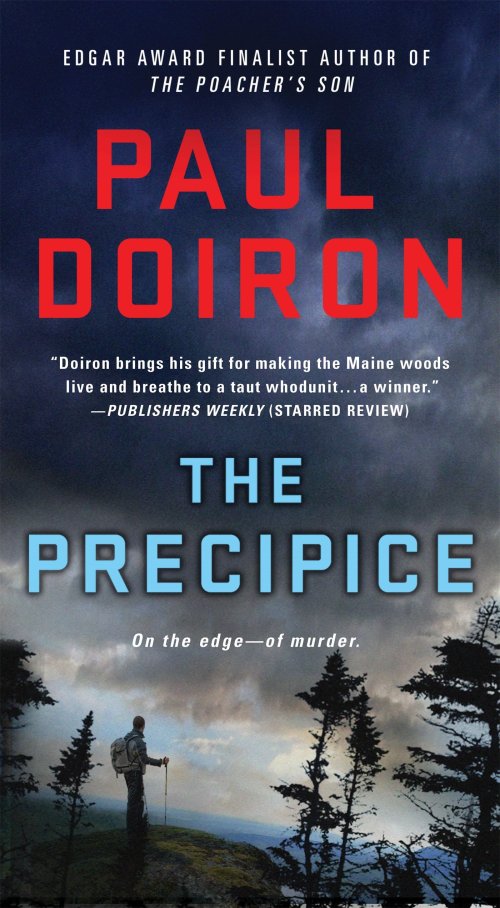 The Paul Doiron/Mike Bowditch thriller series continues with The Precipice, Doiron’s sixth novel, and it is as fresh as ever.  In this installment, Bowditch, a game warden in Maine, is called to search for two missing female college students on the Appalachian Trail.  The story moves quickly, but Doiron’s pacing is excellent.

Initially, it appears as if Bowditch has made a mistake in judgment and let the killer go.   Then, a local ne’er do well distracts lawmen from their quest for the truth.  Next, Bowditch’s girlfriend, Stacey, who works for the Department of Natural Resources, joins him in the search. Then she goes missing.

In a frenzy of fear, locals blame the fate of these young women on a rash of recent coyote sightings.  As the two come closer to the truth, the story moves beyond the thriller manhunt and takes a deeper look into the human psyche.  The Precipice delves into the psychology of fear, the propensity for people to make assumptions and rush to judgment, human sexuality, and religion.

There are few stories that don’t tackle good versus evil in some manner, if not unintentionally.  When a whodonit takes on broader themes and pulls it off, it is worth the read.  Writer Doiron has found his voice.  And for his fans, there’s more good news.  The next installment, Widowmaker, is already in the works.

Dave Moyer is a public school superintendent in Illinois, and is the author of Life and Life Only: A Novel.

Be prepared for globe-trotting action as Steve Martini launches his most recent Paul Madriani thriller at a full throttle.   This pace is maintained as the action shifts among key players and the locales where they are hiding, cooking up mayhem or stalking human prey.

Martini’s fans will be pleased that the story picks up the thread of danger and fear that Madriani’s nemesis, Liquida Muerte, has brought to previous novels.   The nucleus of characters includes his attorney partner Harry Hinds, lady friend Joselyn Cole and, of course, Madriani’s beloved daughter, Sarah.   Further out from the inner circle are Thorpe at the Federal Bureau of Investigation (FBI) and his cohort of spies and snitches.   The premise, locating and stopping terrorists bent on producing the means for destroying key targets in the U.S., creates tension and no end of drama.   The subplot is pure Martini – fierce papa Madriani needs to assure the safety of Sarah and will do most anything to secure it.

”I knew it.   I knew it.   This thing smelled the minute I got that call from the White House.”   Thorpe got out of his chair, waiving the cigarette around like a torch.   “So now they dump it on us to find these guys, and if we fail, it’s our ass in the flames.   And if that’s not enough, they want to play hide the ball.   They can’t tell us what it’s about.   Son of a bitch,” said Thorpe.   “Damn it!”

The focus on wicked scientist from the Jet Propulsion Laboratory in Pasadena, California seems a bit like the reverse play on the TV show NUMB3RS where brilliant scientists solved ugly crime with math and physics.   The doubts about who’s the good guy and who’s the self-centered monster make the plot twists and turns all the more enjoyable.   Martini knows how to play out the suspense and snap to a conclusion, segue to more action and never miss a beat.

While some thriller series may lose their vitality, thankfully, the Madriani franchise is clearly not one of them.   This reviewer is looking forward to the next installment from Steve Martini’s vivid imagination.

A review copy was provided by the publisher.   “Martini is a crafty pro.”   The Washington Post

“Martini has created one of the most charismatic defense attorneys in popular fiction.”   Linda Fairstein