We’re giving away an amazing book! 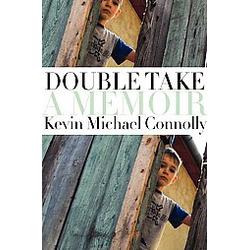 Double Take: A Memoir is an amazing new book from Kevin Michael Connolly; it’s 5-star rated at Amazon.   We will post our own review of this inspiring book in the near future, but in the interim you can win one of three copies that we have to give away!   Yes, we have 3 new, hardbound, copies of Double Take to give away courtesy of SallyAnne McCartin and Associates and HarperStudio.

Here is a synopsis of the book:

Kevin Michael Connolly is a 23-year-old who has seen the world in a way most of us never will.   Whether swarmed by Japanese tourists at Epcot Center as a child or holding court at the X Games on his mono-ski as a teenager, Kevin has been an object of curiousity since the day he was born without legs.   Growing up in rural Montana, he was raised like any other kid (except, that is, for his father’s MacGyver-like contraptions such as the “butt boot”).   As a college student, Kevin traveled to 17 countries on his skateboard and, in an attempt to capture the stares of others, he took more than 30,000 photographs of people staring at him.   In this dazzling memoir, Connolly casts the lens inward to explore how we view ourselves and what it is to truly see another person.   We also get to know his quirky and unflappable parents and his spunky girlfriend.   From the home of his family in Helena, Montana to the streets of Tokyo and Kuala Lumpur, Connolly’s remarkable journey will change the way you look at others, and the way you see yourself.

Sara Gruen, author of Water for Elephants said of Connolly’s book, “Kevin Connolly has used an unusual physical circumstance to create a gripping work of art.   This deeply affecting memoir will place him in the company of Jeanette Walls and Augusten Burroughs.”

And a reader, Cathy Yetter, said:  “I read the book straight through, only stopping to sleep and snack.   Kevin Connolly’s book ‘Double Take’ gave me the feeling of sitting by a campfire with intimate friends just back from distant parts unknown, listening to their adventure tales that you know are true but hard to believe none the less.”

Here are the simple rules for entering this book giveway contest.   To enter the contest once, just send an e-mail to josephsreviews@gmail.com .   For a second entry, you just need to indicate who has been your inspiration in life, and why.   That’s it.   Only persons who live in the United States are eligible and you should be able to supply a residential (street) address rather than a P.O. Box for delivery.   Prior contest winners at this site are again eligible.   This contest will close to entries at midnight Pacific Standard Time on Friday, January 8, 2010.

Munchy the Norwegian Forest Cat – our contest administrator – will pick the names of the three winners out of a large plastic container on January 9th, and we hope and expect to announce the winners on this site on Sunday, January 10, 2010.