There was no cause and effect.   There was no karma.   The truth was that he wasn’t so sure he understood how the world worked anymore.

At the start of Pictures of You, two women – April and Isabelle – are literally driving away from their marriages when they collide on a foggy highway.   Only Isabelle survives.   And she’s joined in the role of survivor by her husband Charlie, April’s husband Sam and his needy 9-year-old son, Sam.   In his neediness, Sam comes to view Isabelle as an angel placed on earth to rescue him.

It’s quite an amazing set-up for an extremely well written novel by Caroline Leavitt.   Leavitt writes in a calm, methodical, factual style that calls to mind both Michelle Richmond and Diane Hammond; and like those authors (and Elizabeth Berg), she intends to impart a few of life’s lessons in the process of telling a story.   One lesson has to do with powerlessness:  “You could think you understood things, but the truth was that you could never see the full picture of someone else’s life.”

Then there’s the fact that we look for something more than human in times of grief and trouble:  “Maybe tomorrow, the angel might be the one to come for him.”   “People believed in angels when they were most in trouble.”

…he had somehow photographed her so that her shoulders were dark and burly, as if she had wings under her dress…  (as if) she might spread them to lift off the ground and fly away.

Sam’s desire to make something sacred out of the very human Isabelle is a representation of the notion that everyone seeks comfort and safety in life.   When Sam’s father reads the obituaries in the newspaper, “He (doesn’t) bother to brush away his tears…  each one said the same thing:  Come home.  Come home.”

Isabelle, however, is the one who has the clear chance to re-start her life, and the reader will be intrigued to see what choices she makes.   The beauty of Leavitt’s telling is that what the reader thinks is going to happen does not.   And this, in itself, makes it a very special book.

Pictures of You concludes with a perfect ending in which everything is fully and satisfactorily resolved.   There’s also a Hollywood-style postscript, a look back from 21 years later, that adds a nice cinematic touch to the account.   All in all, this is an amazing second novel.

The reader who enjoys this book may also want to read American Music: A Novel by Jane Mendelsohn.

You can find our review of American Music here:  https://josephsreviews.wordpress.com/2011/06/21/late-for-the-sky/

If there’s one thing you learn as an undergraduate, it’s that trouble can always be found on a college campus.   More than a few of us will recognize facets of our own schools in Don’t Follow Me, I’m Lost by Richard Rushfield.   Rushfield here writes of his years at Hampshire College “in the twilight of the 80’s.”

Hampshire, in Massachusetts, comes off as the east coast version of U.C. Santa Cruz.   At this college in the woods there  were no grades, students could design their own learning program and attending classes was – well – optional. 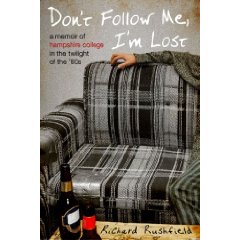 Rushfield majored in drugs, alcohol and trouble.   He found his way into the major trouble-making group on campus, the Supreme D—s.   The Supremes sound a bit like the Yellow Turban Alliance from my own first college – a legendary group whose exploits may have been real or fictional.   (Very real or highly fictional.)

The first few dozen pages of Don’t Follow can irritate the reader due to the fact that the young Rushfield is not easy to relate to.   But whether you wish to or not, you’ll soon be laughing at the exploits of Richard and his friends.   At one point in the memoir, they’re already in trouble (with administrators and their fellow students) when they decide to form a 3-member fraternity.   Oh, they decide to do this since it will make them eligible for the social activity funds (party money) distributed by the student council.   Never mind that they don’t seek recognition from the national fraternity’s headquarters.

You can see where this is going, can’t you?   And you can probably see why it took Rushfield two years to learn that he could no longer “try anything” on the Hampshire College campus, and a full five years to graduate.

Once you get a good start on this truly hilarious read, you’ll find it hard to put down!   Recommended.