On the Brink: Inside the Race to Stop the Collapse of the Global Financial System by Henry M. (Hank) Paulson, Jr. (Business Plus, 496 pages)

“Bear Sterns, as it turned out, was only the first in a long string of financial firms to suffer mortal harm.  …By September 2008, just six months after Bear’s sale to J. P. Morgan, the investment banking industry had effectively ceased to exist.”   Kate Kelly

Kate Kelly’s book, subtitled The Last 72 Hours of Bear Sterns, the Toughest Firm on Wall Street, proves once again that less can be more.   This is a riveting, fly on the wall, account of the rapid demise of the once-powerful Bear Sterns investment firm.   Sterns was Wall Street’s fifth-largest investment bank with a market value of $25 billion dollars – with a “b.”   It was virtually given to J. P. Morgan for the fire sale price of $236 million – with an “m.”

Kelly’s book, an expansion of a three-part series of articles that she wrote for The Wall Street Journal, tells us how this all came to pass in less than half a week in March of 2008.   These were mad-crazy times, the beginning of this country’s fiscal implosion and she covers it in a manner that brings to mind Robert (Bob) Woodward’s reporting.   As with Woodward, Kelly interviewed hundreds of individuals who were present at the meetings and events described here and quoted them without attribution.   But in some instances the reader can clearly tell who the source was, as in cases where an underling criticizes a supervisor.   However, Kelly’s style is smoother and less choppy than Woodward’s first drafts of history.

Street Fighters has 229 pages of actual content and it appears to be just right.   The typical reader will finish the true tale thinking that everything essential was told and little was left out.   There’s both a new preface and a prologue to the trade paperback edition for those who don’t choose to supplement the account with Google searches.

That the length appears to be just right is not something that can be said of On the Brink, the loveable Hank Paulson’s 496 page account of the U.S. and the world’s financial meltdown.   If the mention of 500 pages doesn’t make the point, consider that it takes 13 full CDs to contain the unabridged audiobook version.   Apparently no editors were employed to deliver this effort.

What’s mind-boggling, and often frustrating, about Paulson’s account is that he appears to cover every meeting, every phone call, every thought over a period of weeks and months with dozens of important figures.   Yet he tells the reader that he does not maintain briefing papers, nor ask his staff members to do so, and does not keep records (including e-mails) other than phone call and meeting logs.   From this, he’s recreated virtually everything that happened from an apparently perfect memory – or could it be that recordings were used?   It doesn’t really matter.   It’s just that there is so much detail that this reviewer was worn out less than a third of the way through.

There are also some contradictions apparent in Paulson’s telling.   He gives us several of his seemingly expert opinions about the financial events of the last two years before reminding us that, “I’m not an economist.”   This has the same effect as someone writing about brain surgery and then stating, “I am not a physician.”   He also tells us that he’s not a sentimental person, but he writes of the often-criticized Tim Geithner like a father writing about his favorite son.   One half expects to read that Geithner solved the financial crisis by walking on water.

For those looking for an explanation as to why the U.S. government saved or bailed out some companies but not others, the explanation is not here.   Why did the government ensure that Morgan purchased Bear while permitting Lehman Brothers to fail?   All that can be said is that Paulson provides a few non-explanatory explanations.   In the end they just do not add up. 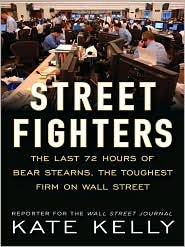 And lastly, as Bob Seger might have warned, what to leave out is just as important as what to leave in.   Kate Kelly in her nonfiction account nailed it.   Paulson was not even close.

A copy of Street Fighters was purchased by the reviewer.   A copy of On the Brink was provided by the publisher. 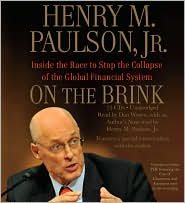 Thanks to Anna at Hachette Audio, we’re giving away three (3) audio book sets of On the Brink: Inside the Race to Stop the Collapse of the Global Financial System by Henry M. (Hank) Paulson, Jr.   This is the unabridged version, on 13 CDs, that contains a special conversation with the author not found in the printed book version.   Each audio book is valued at $34.98 U.S.; $41.98 Canadian.

Here is a synopsis of On the Brink, followed by two excerpts from recent reviews:

When Hank Paulson, the former CEO of Goldman Sachs, was appointed in 2006 to become the nation’s next Secretary of the Treasury, he knew that his move from Wall Street to Washington would be daunting and challenging.   But Paulson had no idea that a year later, he would find himself at the the very epicenter of the world’s most cataclysmic financial crisis since the Great Depression.   Major institutions literally teetered at the edge of collapse.   Worst of all, the credit crisis spread to all parts of the U.S. economy and grew more ominous with each passing day.

This was truly a once-in-a-lifetime economic nightmare.   Events no one had thought possible were happening in quick succession.   All eyes turned to the United States Treasury Secretary to avert the disaster.

This, then, is Hank Paulson’s first-person account.   From the man who was in the very middle of this perfect economic storm, On the Brink is Paulson’s fast-paced account of the key decisions that had to be made with lightning speed.   On the Brink is an extraordinary story about people and politics – all brought together during the world’s impending financial Armageddon.

Paulson’s first-person account of the epic financial collapse is just that – straightforward and direct.   Shorn of anonymous, unsourced dish, it nonetheless offers plenty of excellent color and detail.   Daniel Gross, The Washington Post

This contest is easy to enter.   Just post a comment here or send an e-mail to Josephsreviews@gmail.com .   This will count as one entry.   For a second entry, just tell us why you like to listen to audio book versions of best sellers.

You must be a resident of the U.S. or Canada and have a valid residential address.   Audio books cannot be mailed to P.O. boxes.

The On the Brink contest will be open until midnight PST on Sunday, April 18, 2010.   Good luck and good listening!

Do You Believe in Magic? (A Review of Busted: Inside the Great Mortgage Meltdown)

Veteran New York Times economics reporter Edmund L.  Andrews uses two distinct voices as he chronicles his and the world’s recent descent into near bankruptcy.   Andrews uses simple sentences and overtly simple logic when he focuses on his own life.   At times the reader is treated to some crude expressions of frustration and hostility as he spreads out his marital dirty laundry.   His new wife, Patty, is often described as the true love and soul mate in his life.   But she is also painted as the primary source of his frustrations and money woes because she is not a “go getter” in the corporate world after being a stay-at-home mom for 20 years in a prior relationship.   Andrews apparently was unaware that people do not change their nature, no matter how much one may want it to happen.

Although Andrews could barely afford a decent apartment in the aftermath of his divorce, he financed an over-priced home on a tree lined street outside Washington, D.C.   His rationale was that he and his new love would be cozy and happy in a cute new abode.

In contrast, Andrews’ accounting of the U.S. and world-wide economic tailspin appears to be simply a compilation of many articles he wrote for the Times.   The polished diction is markedly different from the narrative of his personal tale.   We are told that bogus assumptions were used to justify absurd conclusions and the assumptions were rationalizations for judgments that had no basis in fact.   Andrews often adopts the patronizing tone of a disgruntled professor, to the point where the reader fears the dreaded and inevitable pop quiz!

Subsequent to this book’s publication, it was revealed that new wife Patty twice declared bankruptcy, once during the period covered here.   Andrews’ omission of this fact appears to be a glaring and highly relevant defect in the telling of this flawed morality tale.   At one point, Andrews casually writes “it was easier to borrow a half-million dollars and buy something,” as if he were writing about Monopoly money.   There is something very troubling in the contradiction between the reporter-author’s learned big picture view of the U.S. economy, and his seeming inability to focus on the poor habits that resulted in his own economic distress.   It is a bit like reading a Guide to Good Health written by a four pack-a-day cigarette smoker. 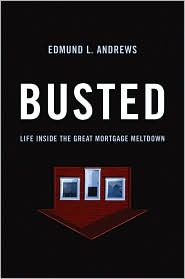