Warning: You should not take a glance at Up From the Blue, the debut novel from Susan Henderson, while you’re reading another book.   I did and found it was impossible to return to the other book until I’d completely finished this well-told and very different story.   It is the tale of Tillie Harris, an eight-year-old girl, whose mother disappears during a family move in 1975.   Tillie’s mother has been depressed and disturbed, but never suicidal.

Tillie herself is a free spirit, a younger version of her mother who should never have married an uptight Air Force officer-engineer who designs war missiles for the Pentagon.   We first meet Tillie as a pregnant adult woman who, because of some unique circumstances, must rely on her estranged father to help her get through the early delivery of her first child.   Her father’s presence at the George Washington University Hospital in D.C. is the last thing Tillie wants but time and fate deprive her of other options.   We start the story in present times before retreating to the nightmare that began in ’75.

This is not a horror story, but it is a story of a monster – the man who is Tillie’s father.   He is a cold quasi-human being, controlling and calculating, but one who people mysteriously defer to:

Even when he’s not wearing his uniform, my dad is giving orders and people just carry them out.

This is the man who supervised the dropping of almost 90,000 tons of bombs during the Persian Gulf War, but it is his actions at home that destroyed both a family and Tillie’s hope.   The young Tillie grew up wondering, “Where were the police asking if I wanted to keep my father with us or send him to jail?”

Little else of the storyline can be divulged without giving away too much.   Henderson offers the reader a highly original voice.   Once you identify with and latch on to the character of Tillie, you simply want to know what happens next in her troubled but realistic life.   Interestingly and ironically, the one recent novel with a similar voice shares the word Blue in its title – The Truth About Delilah Blue by Tish Cohen.   Cohen’s novel is one that can’t be put down and is one that approaches a seemingly predictable ending before the apple cart is upset.   The same may be said about Up From the Blue.

“Sometimes what you fear, what you spend all your energy avoiding or pushing down, is not as terrifying as you thought.”

As a public service, we repeat the warning given earlier.   Do not pick up this novel unless you have time in your busy life to read it all the way through.   But if you don’t have the time, make the time.   Henderson is an author to watch and you’ll want to brag that you read her back when she was just starting out. 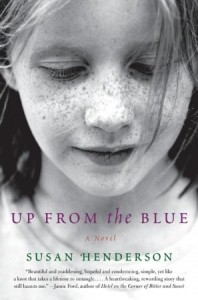